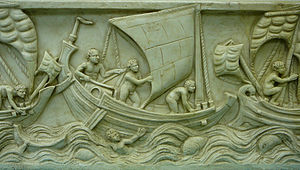 The earliest fore-and-aft rigs appeared in the form of spritsails in Greco-Roman navigation.[1] Here a Roman merchant ship with spritsail (3rd century AD).

A fore-and-aft rig is a sailing rig consisting mainly of sails that are set along the line of the keel rather than perpendicular to it. Such sails are described as fore-and-aft rigged.[2]

The fore-and-aft rig began as a convention of southern Europe and the Mediterranean Sea: the generally gentle climate made its use practical, and in Italy a few centuries before the Renaissance it began to replace the square rig which had dominated all of Europe since the dawn of sea travel. Northern Europeans were resistant to adopting the fore-and-aft rig, despite having seen its use in the course of trade and during the Crusades. The Renaissance changed this: beginning in 1475, their use increased and within a hundred years the fore-and-aft rig was in common use on rivers and in estuaries in Britain, northern France, and the Low Countries, though the square rig remained standard for the harsher conditions of the open North Sea as well as for trans-Atlantic sailing.[3]:p.49 The lateen sail was more maneuverable and speedier, while the square rig was clumsy but seaworthy.