Foreign relations of the Ottoman Empire 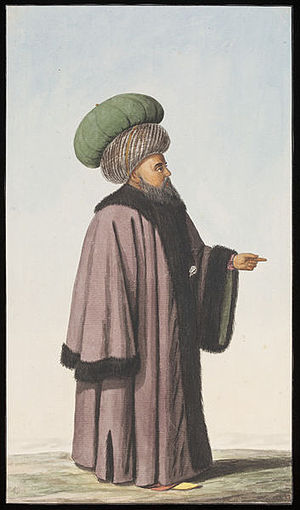 The foreign relations of the Ottoman Empire were characterized by competition with the Persian Empire to the east and Europe to the west. The foreign relations of the Ottomans began to collapse in the late 19th century and the early 20th century, the rise of nationalism under the Ottoman Empire eventually leading to the loss of many important territories. Austria-Hungary annexed Bosnia and Herzegovina, the Bulgarian Declaration of Independence soon followed, and eventually most of the Arab lands became independent soon before the Empire entered World War I.

The Ottoman Empire's diplomatic structure was unconventional and departed in many ways from its European counterparts. Traditionally, foreign affairs were conducted by the Reis ül-Küttab (Chief Clerk or Secretary of State) who also had other duties. In 1836, a Foreign Ministry was created.[1]

Ambassadors from the Ottoman Empire were usually appointed on a temporary and limited basis, as opposed to the resident ambassadors sent by other European nations.[2][3] The Ottomans sent 145 temporary envoys to Venice between 1384 and 1600.[4] The first resident Ottoman ambassador was not seen until Yusuf Agah Efendi was sent to London in 1798.[2][5]

Ambassadors to the Ottoman Empire began arriving shortly after the fall of Constantinople. The first was Bartelemi Marcello from Venice in 1454. The French ambassador Jean de La Forêt later arrived in 1535.[6] In 1583, the ambassadors from Venice and France would attempt unsuccessfully to block William Harborne of England from taking up residence in Istanbul. This move was repeated by Venice, France and England in trying to block Dutch ambassador Cornelius Haga in 1612.[7]

Capitulations were a unique practice of Muslim diplomacy that was adopted by Ottoman rulers. In legal and technical terms, they were unilateral agreements made by the Sultan to a nation's merchants. These agreements were temporary, and subject to renewal by subsequent Sultans.[8][9] The origins of the capitulations comes from Harun al Rashid and his dealings with the Frankish kingdoms, but they were also used by both his successors and by the Byzantine Empire.[9]

The Ottoman Empire was a crucial part of the European states system and actively played a role in their affairs, due in part to their coterminous periods of development.[10][11]

Towards the end of the 15th century, the Ottomans began to play a larger role in the Italian Peninsula. In 1494, both the Papacy and the Kingdom of Naples petitioned the Sultan directly for his assistance against Charles VIII of France in the First Italian War.[12]

Ottoman policy towards Europe during the 16th century was one of disruption against the Habsburg dynasties.[10] The Ottomans collaborated with Francis I of France and his Protestant allies in the 1530s while fighting the Habsburgs.[10] Although the French had sought an alliance with the Ottomans as early as 1531, one was not concluded until 1536. The sultan then gave the French freedom of trade throughout the empire, and plans were drawn up for an invasion of Italy from both the north and the south in 1537.[13]

Francis I later admitted to a Venetian ambassador that the Ottoman Empire was the only thing that prevented Charles V, Holy Roman Emperor from creating a Europe-wide empire under Habsburg dominion.[14][15]

Later, the Dutch would ally with the Ottomans. Prince William of Orange coordinated his strategic moves with those of the Ottomans during the Turkish negotiations with Philip II of Spain in the 1570s.[10] After the Habsburgs inherited the Portuguese crown in 1580, Dutch forces attacked their Portuguese trading rivals while the Turks, supportive of the Dutch bid for independence, attacked the Habsburgs in Eastern Europe.[16]