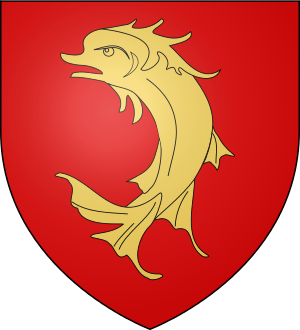 Coat of arms of Forez

Forez is a former province of France, corresponding approximately to the central part of the modern Loire département and a part of the Haute-Loire and Puy-de-Dôme départements.

The final "z" in Forez (French pronunciation: ​[fɔʁɛ]) is not pronounced in the Loire département; however, it is pronounced in the western part of the former province, essentially when referring to the correspondent Forez Mountains (on the border between Puy-de-Dôme and Loire. The name is derived from the city of Feurs. Franco-Provençal is the language that was historically spoken in the region.

Residents of the Forez are called Foréziens.

The rue du Forez in the third arrondissement of Paris was built in the late 16th century and appears on Turgot's map of Paris.

The origins of the county of Forez are obscure. There are several early figures who are sometimes supposed to have been counts of Forez. Whether these are considered counts or not can affect the numbering offered for the later counts.

The counts of Forez were also counts of Lyon in the Empire until 1173, when the countship of Lyon passed to the Archbishop of Lyon.

United to the French crown permanently in 1574.