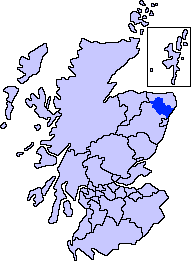 Map of Scotland showing the present-day committee area of Formartine

Formartine (Scottish Gaelic: Fearann Mhàrtainn meaning "Martin's land") is a committee area in Aberdeenshire, Scotland. This district extends north from the River Don to the River Ythan. It has a population of 36,478 (2001 Census).

The committee area was formed in 1996 from part of the former district of Banff and Buchan.

Formartine has experienced rapid population growth, particularly around Ellon and Oldmeldrum, and in the south east where development has spread outwith the city of Aberdeen. By contrast, the area around Turriff retains strong dependency on the traditional agricultural economy. The area's coastline and rural environment offer recreation potential including the Formartine and Buchan Way.

The early history of this locale is evidenced by the survival of a number of prehistoric features, including a number of tumuli.[3]