The Forme of Cury

From Infogalactic: the planetary knowledge core
(Redirected from Forme of Cury)
Jump to: navigation, search 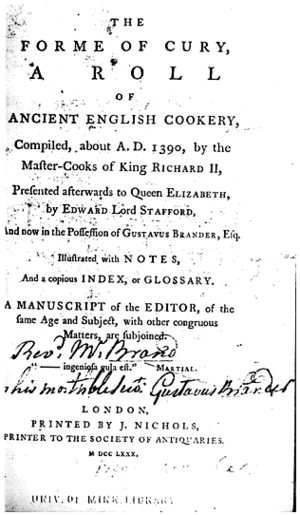 Title page of The Forme of Cury (18th century ed.)

The Forme of Cury (Method of Cooking, cury being from French cuire: to cook)[1] is an extensive mediaeval recipe collection of the 14th century in the form of a roll.[2] Its authors are given as "the chief Master Cooks of King Richard II". The modern name was given to it by Samuel Pegge, who published an edition of it in 1780 for the curator of the British Museum, Gustavus Brander.[2] This name has since come into usage for almost all versions of the original manuscript. Along with Le Viandier, it is the best-known medieval guide to cooking.

The roll was written in late Middle English (c. 1390)[2] on vellum and details some 205 recipes (although the exact number of recipes varies slightly between different versions).

The following is an example of a recipe taken from Pegge's 18th-century edition of the roll:

Take sage, parsley, hyssop and savoury, quinces and pears, garlic and grapes, and stuff the geese with them. Sew the hole so that no grease comes out, and roast them well, and keep the dripping that falls from them. Take galyntine [sauce or jelly of meat juices (gelatin) and grease and add to a posset; when the geese be roasted enough, take and smite [cut] them into pieces, and that which is within and add to a posset and put wine in it if it be too thick. Add powder of galingale, powder-douce and salt, and boil the sauce and dress the geese in dishes and put the sauce on them.[3]

The Café at the Rylands, in Manchester's John Rylands Library, cooked Tart in Ymber Day, Compast, Payn Puff, Frumenty and Gingerbrede, accompanied by Piment (spiced wine), for invited guests in 2009.[4]