Formula E, officially the FIA Formula E Championship, is a class of auto racing that uses only electric-powered cars. The series was conceived in 2012, and the inaugural championship started in Beijing on 13 September 2014.[1] The series is sanctioned by the FIA. Alejandro Agag is the current CEO of Formula E.

The Formula E championship is currently contested by ten teams with two drivers each (after the withdrawal of Team Trulli, there are temporarily only nine teams competing). Racing generally takes place on temporary city-center street circuits which are approximately 2 to 3.4 km (1.2 to 2.1 mi) long. Currently, only the Mexico City ePrix takes place on a road course, a modified version of the Autódromo Hermanos Rodríguez.[2]

All events begin with two practice sessions in the morning, an opening 45-minute session followed by a further 30-minute session. Drivers each have two cars at their disposal with 200 kW available throughout.[3]

The qualifying session normally takes place at noon and lasts one hour. The drivers are divided into four groups of five, with each group having six minutes to set their best lap. Full power of 200 kW is available throughout with drivers only able to use one car. Since the second season, the five fastest drivers then go out again, one-by-one, in the Super Pole shoot-out to determine the top five grid positions.[3]

The race itself lasts for approximately 50 minutes with drivers making one mandatory pit stop to change cars. Tire changes, unless caused by a puncture or damage, are not permitted during this pit stop. In race mode the maximum power is restricted to 170 kW. Points are awarded using the standard FIA system.[3]

For each race, fans can vote for their favourite driver via various social media channels to give them a little extra power boost. Voting starts about two weeks prior to an event and is also open during the opening six minutes of the race. The three winning Fanboost drivers each receive an extra 100 kJ of energy to be used in a power window between 180 kW and 200 kW.[3]

Points are awarded to the top ten drivers using the standard FIA system. Three points are also awarded to the driver securing the pole position, while the driver setting the fastest lap receives an additional two points. The championship consists of both a drivers’ and teams’ championship. A driver's end of season total is made up a driver's best results. A team's total is made up by counting both drivers' scores throughout the season.[3]

For the first season, all teams were supplied an electric racing car built by Spark Racing Technology, called the Spark-Renault SRT 01E. The chassis was designed by Dallara, with an electric motor developed by McLaren (the same as that used in its P1 supercar), a battery system created by Williams Advanced Engineering and a Hewland five-speed gearbox. Michelin will be the official tyre supplier.[4][5][6] For the first season, 42 electric cars have been ordered by the series, with four cars made available to each of the ten teams and two cars kept for testing purposes.[7]

For the second season the technical regulations have been changed to allow for new powertrain manufacturers. The manufacturers are able to build the electric motor, inverter, gearbox and cooling system. The chassis and battery stay the same. Eight manufacturers were selected to create powertrain technology for the 2015–16 season, with existing teams Andretti, Abt Sportsline, Venturi Automobiles, and Virgin Racing Engineering electing to build their own powertrain. In addition, Motomatica, NEXTEV TCR and Renault Sport will provide for customer teams.[11] 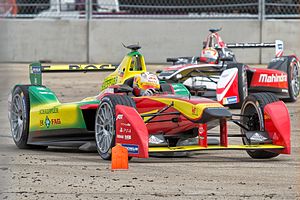 Abt during the Formula E race in Berlin Tempelhof, 2015.

The first Formula E race at the Beijing Olympic Green Circuit on 13 September 2014 was won by Lucas Di Grassi, after Nick Heidfeld and Nicolas Prost crashed out on the final corner. In the course of the season, there were 7 different race winners: Sébastien Buemi (three times), Sam Bird (twice), Nelson Piquet Jr. (twice), António Félix da Costa, Nicolas Prost, Jérôme d'Ambrosio and Lucas Di Grassi. The championship was decided with the last race in London, where Nelson Piquet Jr. became the first Formula E champion, only a single point ahead of Sébastien Buemi. Piquet, Buemi and Di Grassi all had a theoretical chance at winning the title in the final round. The team championship was decided on the second to last race, with e.dams Renault (232 points) winning ahead of Dragon Racing (171 points) who surpassed ABT in the final round of the championship.

The second season of Formula E started in October 2015 and is scheduled to end in early July 2016. The calendar consists of 10 races in 9 different cities. For this season eight manufacturers were introduced, who are allowed to develop new powertrains. After seven rounds, Lucas di Grassi is leading the championship, eleven points ahead of Sébastien Buemi.

During the first season, the FE School Series for student teams that developed their own electric car took place as support races at selected events.[12] However, the series was not continued during the second season.[13]

Planned to start in the third season (2016–17), there will be a support series called Roborace for autonomously driving, electrically powered vehicles.[14] This will be the first global championship for driverless cars.[15]

Records correct up to and including the 2016 Paris ePrix.