Formula Renault is a class of formula racing founded in 1971,[1] popular in Europe and elsewhere. Regarded as an entry-level series to motor racing, it is a respected series where drivers can learn advanced racecraft before moving on to Formula Three, World Series by Renault, GP2 or Formula One. 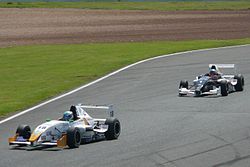 Formula Renault 2.0 race at Silverstone in 2008

At the end of each racing season, Renault Sport gives an opportunity to the best Formula Renault 2.0 drivers to try the 3.5L car at Circuit Paul Ricard.[2]

The old Eurocup and current Asian formulas use Tatuus chassis, while the World Series uses Dallara cars. Michelin is the tyre supplier.

A Pan Am Formula Renault V6 series was planned to take place in 2005 but it never occurred.[3]

The most notable recent graduate of the formula is Kimi Räikkönen, who moved straight into Formula One after winning the British Formula Renault championship. 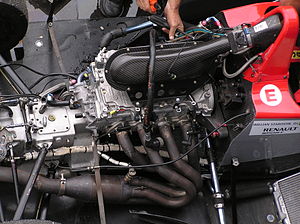 The cars were open-wheelers, with Tatuus-made chassis running 2.0 L Renault Clio engines attached to a Sadev gearbox.[4] They are capable of accelerating from 0 to 100 mph (160 km/h) in 4.85 seconds and braking from 125 mph (200 km/h) to a stop in 4.60 seconds.[5] The Tatuus Formula Renault car is the most successful single seater ever, with 10 years of service and nearly 1000 sold. The car has produced many current Formula One stars, with 11 of the 25 drivers in the 2009 Formula One season using the car in the infancy of their careers.

For the 2010 season, a new car developed by Barazi-Epsilon, will be used in most major championships, with the old car still being used in minor championships such as Formula Renault BARC in the UK.

The chassis is a carbon fiber cell designed and developed by Tatuus and Renault Sport. It also incorporates a FIA-approved roll hoop and lateral driver's head protection. This was introduced in 2000 and updated with new bodywork in 2004 and 2007. Both the chassis and engine are of an FIA-approved "impact break-away" design.

The brakes are four-pot calipers, with ventilated discs and Ferodo(type DS4003) pads. They include cockpit-adjustable bias front-to-rear.

Manufactured by Barazi-Epsilon EB01 A

Main changes to the previous models are:

A majority of Formula Renault champions have gone onto lead successful careers in motor racing, most notably Alain Prost who won the Formula One World Championship four times in his career. Other drivers include René Arnoux, Didier Pironi, Kimi Räikkönen, Felipe Massa and Lewis Hamilton all of which have gone onto win Grands Prix. 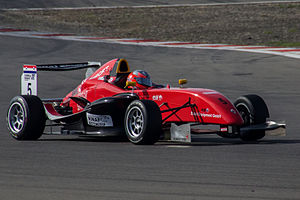 This Formula Renault series is open to drivers between 14 and 21 years that have raced before in karting series.[9]

Other formulas powered by Renault 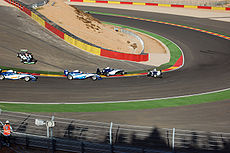 In 2008, the Formula 2000 Light was created.[21] The series is held in Italy with Tatuus's Formula Renault or Formula Three chassis. The same year also saw the introduction of the LATAM Challenge Series, run in Latin America. The Austria Formel Renault Cup has been held since 2007 in Central Europe.[22] This series is held and organised with the Austria Formula 3 Cup and use the 2.0L Renault formulas. The Formule Renault 2.0 North European Zone was also introduced in 2008.

2008 was the first, and ultimately last, season of the Formula Asia 2.0.[citation needed] Its aim was to bring more racing to the Asian region, allowing more drivers to opportunity to race and make the step up to the next level.[citation needed] The series used Renault engines with constructor Tatuus and ran on Michelin provided tyres.[citation needed]

Other formulas powered by Renault