The Fort Duquesne Bridge is a steel tied arch bridge that spans the Allegheny River in Pittsburgh, Pennsylvania. It was colloquially referred to as "The Bridge to Nowhere". It was constructed from 1958-1963 by PennDOT, and opened for traffic October 17, 1969 with its predecessor Manchester Bridge (located closer to the tip of Point State Park) closing that same day (it was demolished in the autumn of 1970). The bridge was given the name "The Bridge to Nowhere" because the main span was finished in 1963, but due to delays in acquiring right of ways for the northern approach ramps, it did not connect on the north side of the Allegheny River. The total cost was budgeted at $5 million in 1962.[1] The lack of approach ramps meant the bridge ended in midair, rendering it useless. The northwestern ramps were completed in 1969, allowing access to Pennsylvania Route 65. The northeastern ramps were completed in 1986, with the construction of the northern section of Interstate 279 (North Shore Expressway) which runs through Downtown Pittsburgh's Golden Triangle and north towards Interstate 79. The bridge touches down halfway between Heinz Field and PNC Park Baseball Stadium on the City's North Shore. 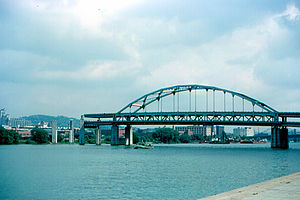 On December 12, 1964, Frederick Williams, a 21-year-old chemistry major at the University of Pittsburgh, drove a 1959 Chrysler station wagon off the end of the bridge and landed unhurt on the other side. His adventure is documented in WQED-TV's Mid-Atlantic region Emmy Award-winning documentary "Flying off the Bridge to Nowhere and Other Tales of Pittsburgh Bridges", narrated by Rick Sebak.

Within a few weeks of this near tragedy, an iconic Pittsburgh radio personality, Rege Cordic, distributed commemorative bumper stickers which read "Official Entry, Cordic & Company Bridge Leap Contest." With thousands of vehicles bearing these stickers on Pittsburgh's streets, the city responded by blocking off the end of the bridge with concrete barriers.