From Infogalactic: the planetary knowledge core
Jump to: navigation, search
For Fort Heath of the Old West, see Forts in Nebraska.

Fort Heath was a US seacoast military installation for defense of the Boston and Winthrop Harbors with an early 20th-century Coast Artillery fort, a 1930s USCG radio station, prewar naval research facilities, World War II batteries, and a Cold War radar station. The fort was part of the Harbor Defenses of Boston (Coast Defenses of Boston 1913-1925) and was garrisoned by the United States Army Coast Artillery Corps. The fort's military structures have been replaced by a residential complex, including the luxurious Forth Heath Apartments, and recreation facilities of Small Park, which has both a commemorative wall and an historical marker for Fort Heath.

File:Ft-Heath-Map-1921.jpg
Fort Heath map of "FEB. 17, 1921" with added modern annotation to "roughly" indicate a former survey marker in the roof of the southernmost of the "BC" buildings (top--6 small adjoining blocks). 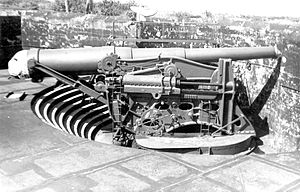 This disappearing carriage at Battery Alexander or Battery Bloomfield at Fort Hancock, NJ (above) was the same model (M1896) as at Ft Heath, and the recessed gun pits were similar. The 12-in gun (top) is an M1888.[5][6]

The Grover Cliff geodetic survey station marker was emplaced in 1847 (Lua error in Module:Coordinates at line 668: callParserFunction: function "#coordinates" was not found., lost by 1922),[3] and the military site was renamed Grover's Cliff Military Reservation.[7] November 1890 planning for the military site was for 3 artillery rifles and 16 mortars,[8] and by spring 1898 Lieutenant Sewail was in charge of construction.[1] A spur of the Boston, Revere Beach and Lynn Railroad was built to the site by March 29,[9] bids for lumber were received in April,[10] and the "Winthrop Mortar Batteries" of the regular army[11] (Battery F and Battery M) were ordered to Grovers Cliff in May 1898[12] for the 16 mortars, with the batteries encamping May 16 on Cherry Street.[11] Constructed during the Endicott modernization period for fortifications, "the first concrete foundation for one of the disappearing guns at Grovers Cliff" was complete in May 1898,[13] and in 1900 the installation was renamed Fort Heath.[7]

Battery Theodore Winthrop construction was complete by 1901 with three 12-inch M1888 guns on M1896 disappearing carriages, the heaviest guns in the United States Army Coast Artillery Corps at the time.[14] "Major Morris of the Seventh Heavy Artillery"[15] was the initial commander,[12] and "Batteries P and O of the Regular Army" manned the guns.[16] Additional land was considered in 1901 for a Fort Heath garrison[17] (temporary barracks were on the west side in 1921),[18] and the fort was inspected by the Ordnance Department in 1902.[19]

Fort Heath was a secondary station for a 1907 naval exercise,[20] and in 1908 the Massachusetts Volunteer Militia had a Fort Heath unit.[21] In 1908 the fort had a "range-finders house" and a sea wall was considered[22] (constructed on the south shore by February 1921).[18] In 1917 a "duct line" between Fort Banks and Fort Heath was contracted to New England Telephone and Telegraph,[23] and for 3 batteries—Winthrop and Battery Kellogg & Battery Lincoln at Ft Banks—Ft Heath had the primary base end stations and the Battery Commanders' stations[24] (a commander's station was atop the Ft Heath parapet).[25]

After the 1925 renaming of the Coast Defenses of Boston to the Harbor Defenses of Boston,[26] the fort's ammunition hoists were authorized for disposal in January 1932.[citation needed] A federal survey marker (MY0121—GROVERS)[clarification needed] was set in the roof of the southernmost of the three fire control buildings at the fort in line at the northern end of Battery Winthrop. The marker on the "BC" (battery control) structure is roughly indicated on the 1921 map. Gun #3 (the most westerly[clarification needed] one) of Battery Winthrop was about 120 ft. southeast of this marker, and the line between this gun and Gun #1 (the most easterly one) was 270 ft. in length.[not in citation given]

The United States Coast Guard radio station at Fort Heath (call sign "NMF") opened on November 12, 1931, and was initially used for testing "traffic…relayed from Point Bonita, California." The station had three 50-foot masts in 1934 (e.g., "Heath Northwest Radio Mast")[27] but as a trial for determining if Navy facilities could instead handle USCG radio traffic, the "station at Winthrop" closed from 1934 to 1936.[28] Subsequently operating "until 1939 when the site was taken over by the Army", the USCG equipment "relocated to a former intelligence monitoring station at North Truro, Massachusetts."[28]

Antiaircraft Artillery Battery No. 4 was designated in 1935 after the 3rd gun pad was constructed in 1934 for 3" AAA guns.[7] The three emplacements were south of a radar[specify] and west of the "Theo. Winthrop"[18] foundations, and the three guns were approved on January 8, 1942, to be moved to Fort Ruckman.[7]

The Fort Heath radar station was a NORAD Control Center of the USAF and US Army from 1960-9 for coordinating interceptors of the Boston Air Defense Sector and Project Nike surface-to-air missiles of the Boston-Providence Defense Area. The station also had an FAA ARSR-1A Air Route Surveillance Radar, and the "control site" was demolished in 1969[34] (the bunker remained in 1971),[35] and after a Rhode Island AN/TSQ-51 had opened by July 1, 1970,[36] Project Concise closed the remaining Nike batteries in 1974.