It is the largest base for Spirit Airlines, catering mainly to the airline's international to domestic network, and is a focus city for Allegiant Air, JetBlue Airways and Southwest Airlines and the headquarters of regional carrier Silver Airways. From December 2011 through November 2012, the top five air carriers by domestic market share were: JetBlue Airways at 18.21%; Southwest Airlines at 17.50%; Spirit Airlines at 16.24%; Delta Air Lines at 15.60%; and US Airways at 8.16%.[5] FLL is ranked as the 21st busiest airport (in terms of passenger traffic) in the United States, as well as the nation's 14th busiest international air gateway and one of the world's 50 busiest airports. FLL is classified by the US Federal Aviation Administration as a "major hub" facility serving commercial air traffic. In 2011 the airport processed 23,349,835 passengers[6] (4.2% more than 2010) including 3,608,922 international passengers (4.7% more than 2010) The airport surpassed 2007/2008 levels by 728,147 passengers.

Merle Fogg Airport opened on an abandoned 9-hole golf course on May 1, 1929. At the start of World War II, it was commissioned by the United States Navy and renamed Naval Air Station Fort Lauderdale. The base was initially used for refitting civil airliners for military service before they were ferried across the Atlantic to Europe and North Africa. NAS Fort Lauderdale later became a main training base for Naval Aviators and enlisted naval air crewmen flying the TBF and TBM Avenger for the U.S. Navy and U.S. Marine Corps aboard aircraft carriers and from expeditionary airfields ashore. NAS Fort Lauderdale was the home base for Flight 19, the five TBM Avenger aircraft that disappeared in December 1945, leading in part to the notoriety of the Bermuda Triangle.

Commercial flights to Nassau began on June 2, 1953 and domestic flights began in 1958–59: Northeast Airlines and National Airlines DC-6Bs flew nonstop to Idlewild, and Northeast flew nonstop to Washington National. In 1959 the airport opened its first permanent terminal building and assumed its current name. 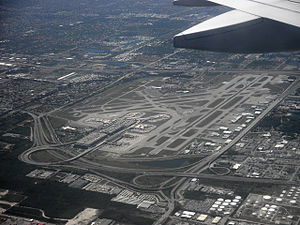 The airport seen from an airliner

Low-cost traffic grew in the 1990s, with Southwest opening its base in 1996, Spirit in 1999, and JetBlue in 2000. Spirit made FLL a hub in 2002 and in 2003 JetBlue made FLL a focus city. US Airways also planned a hub at Fort Lauderdale in the mid-2000s as part of its reorganization strategy before its merger with America West.[9] Low-cost competition forced several major legacy airlines to cut back service to FLL, with United pulling out entirely in 2008[10] and American Airlines moving its New York and Los Angeles services to West Palm Beach in 2013.[11]

During the 2005 hurricane season FLL was affected by Hurricane Katrina and Hurricane Wilma. Katrina struck land in late August as a Category 1 and made landfall on Keating Beach just two miles from the airport (near the border of Broward and Miami-Dade counties) with 80 mph (130 km/h) winds but caused only minor damage; however, the airport was closed for about a 48-hour period. However, when Hurricane Wilma made landfall in October roof damage was reported along with broken windows, damaged jetways, and destroyed canopies. The airport was closed for a period of 5 days. Hurricane Wilma was a Category 2 when its center passed to the west of FLL. 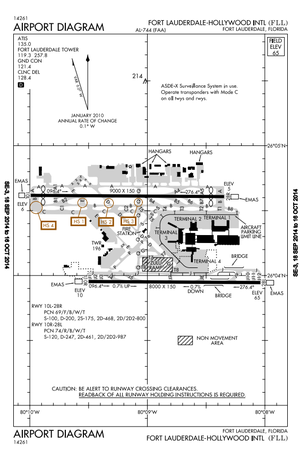 Silver Airways has its headquarters in Suite 201 of the 1100 Lee Wagener Blvd building.[14][15] When Chalk's International Airlines existed, its headquarters was on the grounds of the airport in an unincorporated area.[16]

In 2003 plans were started to expand the facility. Proposed improvements include an extension of runway 10R/28L,[17] construction and modifications to the airport's taxiway system to provide for increased speed, improved inter-terminal passenger movement and extensive terminal upgrades. The plan was updated a second time in April 25, 2006. Complaints by nearby communities about noise, along with concerns about buyout requirements, delayed construction that is expected to keep Fort Lauderdale–Hollywood International Airport viable through 2020.[18]

On June 5, 2007, Broward County commissioners voted six to three in favor of extending the southern 10R/28L runway. The proposal looks to extend the runway to 8,000 ft in order to accommodate larger aircraft and to allow airplanes to land side by side at the same time. The proposal was approved by the FAA and expansion of the south runway is now complete, with the opening of the runway in September 2014.[12] The crosswind runway (13/31) was decommissioned on May 6, 2013.[13] All four terminals, now having 57 gates, will have 97 with the completion of a new long-haul international Terminal Four and Concourse A at Terminal One. By 2020, Ft. Lauderdale–Hollywood is projected to handle 36 million passengers annually.[19]

Demolition and Reconstruction of Terminal Four

During and after the expansion of runway 10R/28L, reconstruction of Terminal Four will begin at the cost of $450 million. The H concourse will be demolished to build the new "G" concourse. In this process four new gates will be added. Concession space will be increased from 2,128 ft² to 28,000 ft² and a secure walkway will be added to connect terminals three and four.[20] 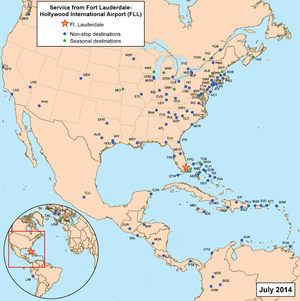 Destinations with direct service from FLL

Fort Lauderdale–Hollywood International Airport has four terminals. Terminal 1, commonly referred to as "The New Terminal," opened in stages between 2001 and 2003 and was designed by Hellmuth, Obata and Kassabaum[21] and Cartaya Associates.[22] The other three terminals designed by were constructed in 1986 and designed by Reynolds, Smith & Hills as part of a $263 million construction project.[23] Terminal 4, commonly referred to as the International Terminal, was inaugurated by a Concorde visit in 1983. Since 2005, T4 has been undergoing renovations and a major expansion designed by PGAL/Zyscovich joint venture. The airport announced that Terminal 1, common known as "The New Terminal", will undergo $300 million makeover which construction is expected to begin in late 2014 and should be completed by 2017.[24] 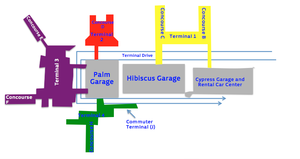 FLL is served by Broward County Transit bus Route 1 which offers connecting service through the Central Terminal in Downtown Fort Lauderdale, and also service to Aventura, in Miami-Dade County.

Rail service between Miami and West Palm Beach is provided by Tri-Rail commuter rail service at the Fort Lauderdale/Hollywood International Airport station, accessible via a free Tri-Rail shuttle from the main terminals. The shuttle stops at 3 locations at the airport, all on the lower level: west end of terminal 1, between terminals 2 and 3, and between terminals 3 and 4. The shuttle operates 7 days a week.

The airport also offers airport parking and operates a consolidated rental car facility which can be accessed from Terminal 1 by a short walk and from the other terminals by a free shuttle bus service.

On May 18, 1972, an Eastern Air Lines McDonnell Douglas DC-9-31 had its landing gear collapse and tail section separate during landing. The aircraft then caught fire but all passengers and crew were able to safely evacuate.[35]

On July 7, 1983, Air Florida Flight 8 with 47 people on board was flying from Fort Lauderdale International Airport to Tampa International Airport. One of the passengers handed a note to one of the flight attendants, saying that he had a bomb, and telling them to fly the plane to Havana, Cuba. He revealed a small athletic bag, which he opened, and inside was an apparent explosive device. The airplane was diverted to Havana-José Martí International Airport, and the hijacker was taken into custody by Cuban authorities.[36]

On November 19, 2013, an Air Evac International Learjet 35 crashed shortly after take-off from the airport, on its way to Cozumel, Mexico, after calling mayday and during an attempt to return to the airport, possibly due to engine failure, leaving 4 persons dead.[37]

On October 29, 2015 a Dynamic Airways Boeing 767-246ER / N251MY was taxiing to a runway at Fort Lauderdale International Airport en route to Caracas, Venezuela when its left engine caught fire due to a fuel leak. The airplane was immediately stopped and fire crews were dispatched to the scene. Everyone was evacuated from the aircraft. 101 passengers and crew were on board, and 17 passengers were transported to a hospital. All runways were shut down and air operations were ceased at the airport for 3 hours.[38]