Fort Myers is the county seat[4] and commercial center of Lee County, Florida. Fort Myers is a gateway to the Southwest Florida region and a major tourist destination within Florida. The winter homes of Thomas Edison ("Seminole Lodge") and Henry Ford ("The Mangoes") are a primary tourist attraction in the region.[5] The city is named after Colonel Abraham Myers.[6][7] The geographic statistical area is serviced by Southwest Florida International Airport (RSW), located southeast of the city. 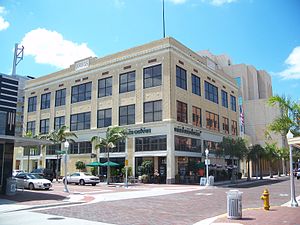 Fort Myers was one of the first forts built along the Caloosahatchee River as a base of operations against the Seminole Indians during the American Indian Wars. During the Seminole Wars, Fort Myers was a strategic location for its visibility and access to Atlantic waterways.

Gonzales had shipped supplies and carried mail during the war and settled his family near the abandoned Fort Myers to begin the town's first trading post. Gonzalez traded tobacco, beads, and gunpowder, and sold otter, bobcat, and gator hide, to the neighboring Seminole Indians.[8]

On August 12, 1885, the small town of Fort Myers—all 349 residents—was incorporated. By that time, it was the second largest town on Florida’s Gulf Coast south of Cedar Key.[11]

In 1885, inventor Thomas Alva Edison was cruising Florida’s west coast and stopped to visit Fort Myers.[12] He soon bought 13 acres along the Caloosahatchee River in town, and built a home and laboratory, "Seminole Lodge", as a winter retreat. After the Lodge was completed in 1886, Edison and his wife, Mina, spent many winters at their home in Fort Myers. Edison also enjoyed local recreational fishing, for which Fort Myers had gained national notoriety.[13]

In 1898, Fort Myers became a nationally known winter resort destination with the building of the Royal Palm Hotel.[14]

On May 10, 1904, access to the Fort Myers area was greatly improved with the opening of the Atlantic Coast Line Railroad, connecting Punta Gorda to Fort Myers. This route provided Lee County both passenger and freight railroad service.[15]

In 1908, the Arcade Theater was constructed in downtown Fort Myers. It served originally as a vaudeville house, and was an auditorium that Fort Myers resident Thomas Edison sat in to view his first films, with his friends Henry Ford and Harvey Firestone.[16] The Arcade Theatre was eventually converted into a full movie house, with a wall dividing the stage to form two screening rooms. It is now host to the Florida Repertory Theatre, a performing arts hall.

During the period of 1914-1918 (World War I), Edison became concerned with America's reliance on foreign supplies of rubber. He partnered with tire producer Harvey Firestone, of the Firestone Tire and Rubber Company, and his good friend Henry Ford, of the Ford Motor Company, to try to find a rubber tree or plant that could grow quickly in the United States and, above all, contain enough latex to support his research endeavor. In 1927, the three men contributed $25,000 each, and created the Edison Botanic Research Corporation in an attempt to find a solution to this problem.[17]

In 1928, the Edison Botanic Research Corporation laboratory was constructed. It was in Fort Myers, Florida that Edison would do the majority of his research and planting of his exotic plants and trees, sending any results or sample rubber residues up to West Orange, New Jersey, to his large Thomas A. Edison "Invention Factory" (now preserved in the Thomas Edison National Historical Park). Through Edison's efforts, the royal palms lining Riverside Avenue (now McGregor Boulevard) were imported and planted, and would become the reason for Fort Myers's "City of Palms" nickname.[18]

After testing 17,000 plant samples, Edison eventually discovered a source in the plant Goldenrod (Solidago leavenworthii). Thomas Edison died in 1931, and the rubber project was transferred to the United States Department of Agriculture five years later.[19]

In 1916, automobile magnate Henry Ford purchased the home next door to Edison's from a Robert Smith of New York, which Ford called "the Mangoes". Ford's craftsman style bungalow was built in 1911 by Smith. Ford, along with Harvey Firestone and Thomas Edison, were generally considered the three leaders in American industry at the time, and often worked and vacationed together. All three were part of a very exclusive group titled "the Millionaires' Club". The three men are now memorialized in statues in downtown Fort Myers' Centennial Park

In 1924, with the construction of the Edison Bridge, which was named after the city's most famous winter resident, the city's population steadily grew. In the decade following the bridge's construction, the city experienced its first real estate boom. Several new residential subdivisions were built beyond Downtown, including Dean Park, Edison Park, and Seminole Park [20] Edison Park, located across McGregor Boulevard from the Edison and Ford properties, includes a number of Fort Myers' most stately homes. The historic development showcases a variety of architectural styles, and is known for its community activities and strong neighborhood ties.[21]

On February 11, 1931, the 84th birthday of its namesake, the Edison Bridge was opened. Edison dedicated the bridge, and was also the first to drive across it.

In 1947, Mina Edison deeded Seminole Lodge to the City of Fort Myers in memory of her late husband for the enjoyment of the public. By 1988, the adjacent Henry Ford winter estate was purchased and opened for public tours in 1990. The combined properties today are now known as the Edison and Ford Winter Estates.

Fort Myers has short, warm winters, and long, hot, humid summers, with most of the year's rain falling from June to September.

The temperature rarely rises to 100 °F (38 °C) or lowers to the freezing mark.[22] At 89, Fort Myers leads the nation in the number of days annually in which a thunderstorm is close enough for thunder to be heard.[23]

Fort Myers is one of two cities that make up the Cape Coral-Fort Myers Metropolitan Statistical Area. The 2010 population for the metropolitan area was 618,754.[26]

The population of Lee County, Florida and the Cape Coral-Fort Myers Metropolitan Statistical Area has grown 40.3 percent since the census in 2000, much faster than the average growth rate of 17.6 percent experienced throughout the State of Florida.

The mayor is elected in a citywide vote. The current mayor of Fort Myers is Randy Henderson, Jr.

Policing of Fort Myers is performed by the Fort Myers Police Department. 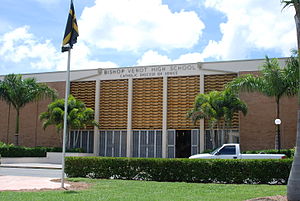 See: Lee County School District for other public schools in the area.

Secondary schools in the city include:

Institutions of higher learning in the city include:

The City of Palms Classic is an annual high school basketball tournament held in Fort Myers, Florida, since 1973. Several of its alumni have made it to the NBA. 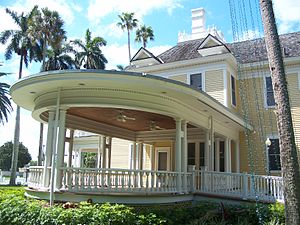 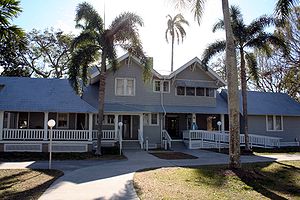 Fort Myers has twinning agreements with the following sister cities: