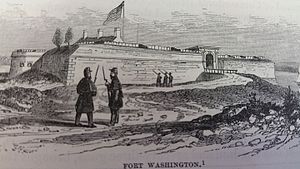 Fort Washington is an unincorporated area and census-designated place in Prince George's County, Maryland. It borders the capital of the United States of America, Washington, D.C., situated just south of the downtown district.[2] It is a prosperous community with an African American majority population. As of the 2010 census it had a population of 23,717.[3] The Fort Washington community is located west of Maryland Route 210, with some additional area to the east of the highway. 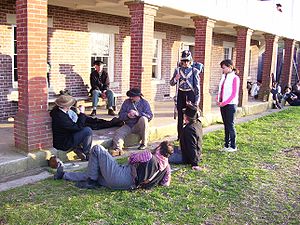 A group of historical re-enactors at Fort Washington in April 2008.

The community is named for Fort Washington, which upon its completion in 1809 was the only defensive fort protecting Washington, D.C. The fort is a stone structure and offered a good field of range for cannon fire at enemy advances on the Potomac River. During the War of 1812, the fort was quickly abandoned during a British advance. In 1844, a cannon exploded on the USS Princeton as it was passing Fort Washington.[4] During World War II, the US Army's Adjutant General's School was located at the fort, and had billeting for 362 officers and 2,526 enlisted persons.[5]

The site is now part of a very extensive park with views of the Potomac River and hiking paths. It is a scenic place for picnicking, fishing and outdoor recreation. (Admission is free to people entering after business hours and before sunset.)

During the War of 1812 Fort Washington, built to protect the capital from enemy advances on the Potomac River, was captured by the British under the command of Admiral Gordon, three days after the burning of the capital.[6]

Upon the outbreak of the American Civil War, fearing for the safety of Washington in case of attack, Secretary of the Navy Isaac Toucey ordered a detachment of US Marines to garrison the fort.

In May 1865 Secretary of the Navy Gideon Welles ordered the Potomac Flotilla reduced to half strength due to cessation of hostilities. This included the removal of the Marines from Fort Washington.[7]

Near the fort are many riverfront homes, two marinas, two community pools, and National Golf Club. The area was rural until about 1960 when suburban growth began and is continuing to grow, adding new, large family homes in small developments next to older existing developments. Until the founding of the Oxon Hill post office about 1960, the Fort Washington area generally used the mailing address Washington, D.C., except for the few years that Friendly had a post office. About 1980 the postal service split the Fort Washington area from Oxon Hill, defining it as a separate town name. At that time, to make mail sorting easier, they drew the boundary between the two communities to conform to already existing zip code boundaries. The end result sometimes confuses people, since the northern end of the Fort Washington postal area (near the Beltway) identifies more with the communities Oxon Hill or Temple Hills / Camp Springs but still uses a Fort Washington mailing address.

First-time visitors are often confused by the several "Livingston Roads" which repeatedly crosses Route 210, as well as by the two separate "Old Fort Roads", causing them to make wrong turns off of Maryland Route 210. Eventually all roads intersecting Route 210 in the Fort Washington area (from the Beltway as far south as the highway 210 curve at Piscataway Creek) are planned for upgrading to controlled-access interchanges (eliminating all traffic signals) gradually during the 2020s decade.

The fort’s land originally included 347 acres, which was last surveyed in June 1944.[5]

The Maryland-National Capital Park and Planning Commission (M-NCPPC) maintains the Harmony Hall Regional Center [1], including the John Addison Concert Hall, site of community theater ("Tantallon Community Players"), art shows, frequent concerts, and a variety of classes for all ages. A YMCA fitness center opened in 2005, and a community center facility in 2013 in Fort Washington Forest. The 12,000-member Ebenezer A.M.E. Church is noteworthy, as is a large nursery/landscaping business and a popular motorcycle shop. There is a small 50-bed hospital (Fort Washington Hospital). Many highly successful African-Americans live in Fort Washington; there are also some Ethiopian residents and a large, long-established ethnic Filipino population.

There were 8,135 households out of which 26.5% had children under the age of 18 living with them, 57.9% were married couples living together, 14.7% had a female householder with no husband present, and 22.3% were non-families. 18.3% of all households were made up of individuals and 7.1% had someone living alone who was 65 years of age or older. The average household size was 2.89 and the average family size was 3.24.