Fortec Motorsport Ltd. is a motor-racing team that races in the Formula Renault 3.5 Series, the British Formula 3 Championship, and several junior formulae categories at a British and pan-European level. The team was bought in 1995 by current owner Richard Dutton.[1] 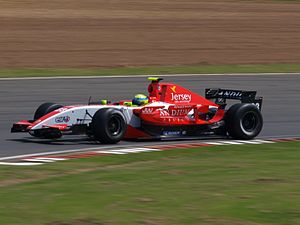 James Walker driving for Fortec at the Silverstone round of the 2008 World Series by Renault season.

After a barren year for the team in Formula Renault in 2005, 2006 saw the team regain both championship titles, with Sebastian Hohenthal just clinching the drivers' title on countback, after he and Team A.K.A. driver Patrick Hogan ended the season on the same number of points. Duncan Tappy and Dean Smith finished in the top two placings in 2007. Another teams' title followed in 2008. More recently, the team has seen great improvements in its Formula Renault 3.5 Series results, finishing fifth in the Teams' Championship in 2009, fourth in 2010 and finishing as runners-up in 2011 season with driver Alexander Rossi finishing third overall and best rookie. In 2012 the team fielded rookies Robin Frijns from the Netherlands and Carlos Huertas from Colombia, Frijns won the driver championship in his first year scoring 3 wins during his championship season. Meanwhile, Huertas scored regular results and finished 16th in the season scoring 35 points, but Fortec finished 3rd in the teams championship behind Tech 1 Racing and New team Arden Caterham Motorsport.