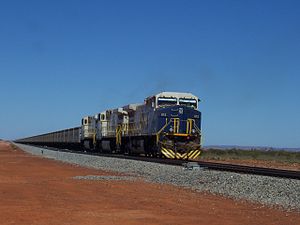 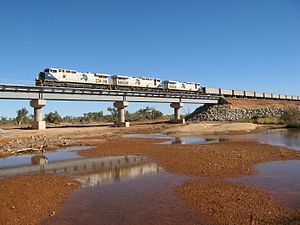 Fortescue Metals Group Ltd is an Australian iron ore company. Fortescue is the fourth largest Iron ore producer in the world as of March 2011. The company has holdings of more than 87,000 km² in the Pilbara region of Western Australia making it the largest tenement holder in the state,[2] larger than both BHP Billiton and Rio Tinto.[3]

The group has two main areas of operation located within the Pilbara region of Western Australia; the Chichester Hub and Solomon Hub. Plans to develop a third, Western Hub are currently in developmental stage.

Located in the heart of the Pilbara, the Chichester Hub is made up of Fortescue’s flagship minesite Cloudbreak and the second minesite Christmas Creek. The total Chichester Hub produces 90 million tonnes per annum (mtpa) of iron ore plus an additional five mtpa from a joint venture with BC Iron.[4]

Fortescue’s first minesite Cloudbreak currently mines 40 million tonnes of iron ore a year.[4] The horizontal nature of the deposits at Cloudbreak called for a new mining approach to those used at other mines which operate on vertical deposits of ore. Overburden removal is done using conventional blast, truck and shovel methods while specially designed surface miners cut and load the ore into trucks for transport to the run of mine stockpiles. Screening, crushing and desand plants at the Cloudbreak ore processing facility prepare and refine the product before the ore is stockpiled ahead of transport to port. The train loadout facility at Cloudbreak is capable of feeding 16,000 tonnes of ore per hour on the 2.7 kilometre long trains ready for the journey along the 256 kilometre heavy haul railway to the facilities at Herb Elliott Port.

Mining began at Christmas Creek, 50 kilometres (31 mi) to the east of Cloudbreak, in May 2009. Subsequent expansion projects have lifted production capacity to 50 million tonnes per annum.[4] The operations at Christmas Creek are undergoing expansion and in late 2010 a 50 kilometres (31 mi) extension to the existing Port Hedland to Cloudbreak rail line was completed to transport the ore to Cloudbreak. The first Ore Processing Facility (OPF) was commissioned at Christmas Creek in April 2011 with a second OPF commissioned in 2012. As part of the second expansion, a number of additional infrastructure projects were completed, including a 6.3 km overland conveyor, a new airstrip, an expansion of the power plant and increasing capacity at the operations village to 1600 rooms.[4]

Centrally located in the middle of Fortescue’s 87,000 km2 (34,000 sq mi) Pilbara tenement area, the Solomon Hub is Fortescue's next major project. It has almost twice the resource and less than half the strip ratio of the Chichester Hub. Fortescue’s Exploration team has already delineated more than 2.86 billion tonnes (2.81×109 long tons; 3.15×109 short tons) of resource at the Solomon Hub and there are identified exploration prospects targeting up to 5 billion tonnes (4.9×109 long tons; 5.5×109 short tons). In May 2013, Fortescue officially opened its 20 million tonnes per annum (mtpa) Firetail mine at Solomon.[6] In December 2013, the company announced it had achieved first production from its 40mtpa Kings mine.[7]

The Train Load Out (TLO) facility at Firetail was commissioned in November 2012 and first ore was transported on the Fortescue Hamersley Rail Line in December 2012. In December 2012 Fortescue opened the 129 kilometre Solomon Railway that connects Solomon to Fortescue's mainline to its port operations.[8]

BC Iron is a much smaller mining company with iron ore deposits at Nullagine. In 2009, the two companies entered into a 50:50 joint venture in which BC Iron manages mining, crushing and screening, and trucking while Fortescue is contracted to provide haulage and port services to the JV.[9] In December 2012 Fortescue sold a 25% stake to BC Iron Ore for A$190 million and agreed to increase the available capacity to the NJV on Fortescue’s rail and port infrastructure from the existing 5 million tonnes per annum(mtpa), to 6mtpa for the life of the joint venture.[10] 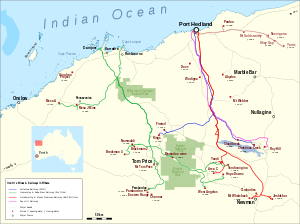 The company has built a mine, a 260-kilometre (162 mi) private railway and a new port at Point Anderson (aka Herb Elliott Port)[11] near Port Hedland. The Fortescue rail line has a flyover over the Mount Newman railway, and a crossing of the BHP Billiton railway. The "first ore on ship" on the line occurred in May 2008, 3.5 years after construction started.[12]

The railway parallels another iron ore railway, the BHP Billiton railway, for over 100 kilometres (62 mi). Fortescue had sought access to use this line, but BHP declined.[13] The matter remains in litigation.[14]

The FMG railway uses the up-to-date Electronically controlled pneumatic brakes for all its rolling stock.

FMG lodged applications for three mining leases in the Solomon Hub area in 2008, and began negotiations with the native title holders through the Yindjibarndi Aboriginal Corporation (YAC). Negotiations broke down and the YAC lodged its opposition to the grant of the three licenses to the Native Title Tribunal in 2009, initially failing to win orders preventing the grant of the licenses. The YAC also failed in its initial Federal Court appeal of that decision last year, and the State Government issued the mining licenses to FMG in late November 2010. Both FMG and the YAC are now waiting on the results of a new appeal to the Full Bench of the Federal Court. [15][16] The company estimated the extraction of 2.4bn tons of ore over the next 40 years, worth $280bn, offering less than a deal struck by Rio Tinto that would provide $2bn over 40 years.[17]

On 8 April 2011, Slater & Gordon, representing the Yindjibarndi Aboriginal Corporation in its negotiations with FMG, requested FMG compensate the Yindjibarndi community. In March 2011, FMG was accused of supporting a break-off group[18][19] to divide the local Yindjibarndi community during negotiations for access to traditional Yinjibarndi land for the planned $8.5 billion Solomon Hub project, in the Pilbara region. While the law firm admitted FMG has put compensation money up, it said it was insufficient in comparison with the profits that will be made from this mine on the client's traditional land, as well as the royalty (tax) amounts that have been paid to non-Aboriginal people.[20]

In late 2004 and early 2005, Fortescue chairman and then CEO Andrew Forrest made a series of announcements that Fortescue had entered into “binding agreements” with three significant Chinese state owned entities to build and finance infrastructure for the company.[21][22]

In 2006, Australian Securities and Investment Commission (ASIC) commenced civil proceedings against Fortescue alleging the company had engaged in “misleading and deceptive conduct”, had breached the disclosure provisions in the provisions in the Commonwealth Corporations Act 2001,[19] by claiming to have binding contracts with China and Mr Forrest had breached his duties as a director of a company.[21][23]

The matter was first heard by Justice Gilmour in the Federal Court with the judge dismissing ASIC’s claims in their entirety.[21][23] ASIC appealed and in February 2011 the Full Court of Federal Court unanimously upheld the ASIC appeal.[21]

Fortescue appealed the decision and in 2012 the High Court ruled the Fortescue's representations of the agreements was "neither false nor misleading".[24][25] In his judgement, Justice Honour concluded that Fortescue’s releases “correctly represented that there was an agreement, and that it was in the view of the parties binding from the time of board approval”.[21]

Despite the early announcement, in 2008, the group loaded its first iron ore shipment bound for China. Fortescue have at least 10 Chinese steel mill contracts lasting for around 10 years. Baosteel was the first company to receive their iron ore.[26]

In reaching its target six months early, the company had signed 102 contracts and subcontracts with 50 businesses [28] including $500m worth of contracts with six Aboriginal joint ventures and Morris Corporation representing the largest ever package of contracts awarded to Aboriginal businesses.[31] Of the contracts awarded, Fortescue said more than 80% were awarded to Aboriginal businesses that were at least half indigenous owned.[28] Fortescue chairman Andrew Forrest told The Guardian. "The depth of what the Indigenous people have achieved and the change in direction they're taking is really historic."[30]