From Infogalactic: the planetary knowledge core
Jump to: navigation, search
Not to be confused with Fortum.

Fortnum & Mason (colloquially often shortened to just "Fortnum's") is an upmarket department store situated in central London, with an additional store at St Pancras railway station, Heathrow T5, Dubai and various stockists worldwide. Its headquarters is located at 181 Piccadilly, where it was established in 1707 by William Fortnum and Hugh Mason. It is privately owned by Wittington Investments Ltd. 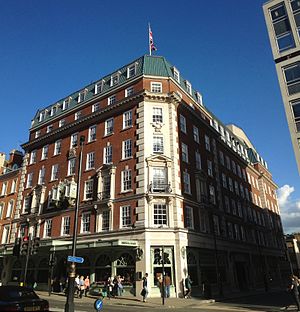 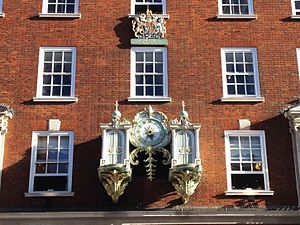 The mechanical clock on the main facade 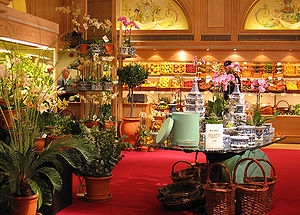 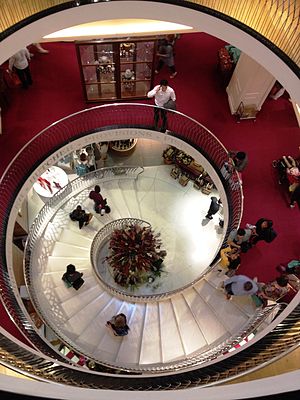 Founded as a grocery store, Fortnum's reputation was built on supplying quality food, and saw rapid growth throughout the Victorian era. Though Fortnum's developed into a department store, it continues to focus on stocking a variety of exotic, speciality and also 'basic' provisions.[1]

The store has since opened several other departments, such as the Gentlemen's department on the third floor. It is also the location of a celebrated tea shop and several restaurants.

William Fortnum was a footman in the royal household of Queen Anne. The Royal Family’s insistence on having new candles every night meant a lot of half-used wax which William Fortnum promptly resold for a tidy profit. The enterprising William Fortnum also had a sideline business as a grocer. He convinced his landlord, Hugh Mason, to be his associate, and they founded the first Fortnum & Mason store in Mason's small shop in St James's Market in 1707. In 1761, William Fortnum's grandson Charles went into the service of Queen Charlotte and the Royal Court affiliation led to an increase in business. Fortnum & Mason claims to have invented the Scotch egg in 1738.[2][3] The store began to stock speciality items, namely ready-to-eat luxury meals such as fresh poultry or game served in aspic jelly.[4]

During the Napoleonic Wars, the emporium supplied dried fruit, spices and other preserves to the British officers and during the Victorian era it was frequently called upon to provide food for prestigious Court functions. Queen Victoria even sent shipments of Fortnum & Mason's concentrated beef tea to Florence Nightingale's hospitals during the Crimean War.[5]

Charles Drury Edward Fortnum F.S.A. (1820–1899), of the family, was a distinguished art collector and a Trustee of the British Museum, to which he donated his collection of Islamic ceramics.[6]

In 1886, after having bought the entire stock of five cases of a new product made by H.J. Heinz, Fortnum & Mason became the first store in Britain to stock tins of baked beans.[5]

In April 1951, Canadian businessman W. Garfield Weston acquired the store and became its chairman following a boardroom coup.[7] In 1964, he commissioned a four-ton clock to be installed above the main entrance of the store as a tribute to its founders. Every hour, 4-foot-high (1.2 m) models of William Fortnum and Hugh Mason emerge and bow to each other, with chimes and 18th-century–style music playing in the background. Since Garfield Weston's death in 1978, the store has been run by his granddaughters, Jana Khayat and Kate Weston Hobhouse and the Managing Director is Ewan Venters.

The store underwent a £24 million refurbishment in 2007 as part of its tercentenary celebrations.[8]

In March 2012, the Queen, Camilla, Duchess of Cornwall and Catherine, Duchess of Cambridge made their first official joint visit to Fortnum & Mason.[9] The Queen opened the Diamond Jubilee Tea Salon on the fourth floor.

In November 2013, an additional store was opened at St Pancras International station - the first new store in the UK.[10]

Fortnum & Mason opened its first standalone store outside Britain in Dubai on 21 March 2014.

In November 2010, animal rights group PETA UK began a campaign against Fortnum & Mason’s sale of foie gras citing the "cruelty" in the production process. The group regularly holds demonstrations involving celebrities, activists and volunteers outside the store. Celebrities supporting the campaign include Geezer Butler, Sir Roger Moore,[11] Owain Yeoman,[12] Tamara Ecclestone,[13] Bill Oddie,[14] Twiggy[15] and Morrissey.[16] Fortnum & Mason has recently been reprimanded by Westminster Trading Standards for misleading customers about its animal welfare standards.[17] As a result, the grocer has changed its corporate social responsibility document to state that only UK suppliers are required to adhere to its welfare standards.

On 26 March 2011, Fortnum & Mason was targeted by the group UK Uncut, who broke off from the main 2011 anti-cuts protest march to target the tax avoidance policies of Associated British Foods, which, like Fortnum & Mason, is owned by Wittington Investments.[18] This took the form of a mass sit-in, with some 138 UK Uncut protesters being arrested.[19] The charitable Garfield Weston Foundation owns 79.2% of Wittington Investments.

Fortnum & Mason is famed for its loose-leaf tea and its world-renowned luxury picnic hampers, which the store first distributed to Victorian High Society for events such as the Henley Regatta and Ascot Races. These hampers – which contain luxury items such as Stilton cheese, champagne, quails' eggs and smoked salmon – remain popular today, especially at Christmas time, and can cost (as of 2008) from £35 to £25,000.

On 14 November 2014, Fortnum & Mason released a rebranded and redeveloped London Dry Gin created as a partnership brand by The London Distillery Company Ltd.[20]

The London Distillery Company was approached by Fortnum and Mason in September 2014 to undertake the rebrand following continued in-store success of Dodd's Gin, which was created as a tribute to an 18th-century engineer and entrepreneur, Ralph Dodd.[21] Dodd's Gin was initially launched exclusively with Fortnum & Mason's in April, 2013.[22]

Design agency United Creatives were commissioned by The London Distillery Company CEO Darren Rook to undertake the label rebrand.[23] The labels are printed on FSC paper stock and are unvarnished.[citation needed]