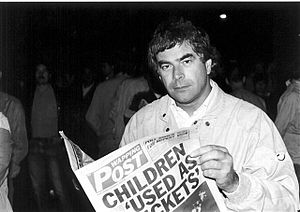 Tony Dubbins, General Secretary of the National Graphical Association, on the picket line during the Wapping dispute

The Wapping dispute was, along with the miners' strike of 1984-5, a significant turning point in the history of the trade union movement and of UK industrial relations. It started on 24 January 1986 when some 6,000 newspaper workers went on strike after protracted negotiation with their employers, News International (parent of Times Newspapers and News Group Newspapers, and chaired by Rupert Murdoch). News International had built and clandestinely equipped a new printing plant for all its titles in the London district of Wapping, and when the print unions announced a strike it activated this new plant with the assistance of the Electrical, Electronic, Telecommunications and Plumbing Union (EETPU). Although individual members of the National Union of Journalists went to work in Wapping and NUJ Chapels continued to operate, the National Union urged its members not to work inside the wire unless there was an agreement covering the transfer to Wapping and the responsibilities taken on by journalists. Many NUJ members accepted this advice and refused to go to Wapping. During the dispute they became known as "refuseniks".

To say that Fleet Street in the 1980s was out of control barely hints at the scale of matters. The National Graphical Association, the printers’ union, decided how many people were needed on each paper (hundreds and hundreds) and how many were to be laid off during a recession (none), and billed the management accordingly. Managements didn’t have the power to hire and fire their own print workers, indeed generally didn’t even know how many print workers they employed. I have before me a headline from December 1985 saying, AUDITORS FIND 300 EXTRA PRINTING STAFF AT TELEGRAPH. That is to say, The Daily Telegraph was paying salaries to three hundred people who didn’t actually work there. Printers were paid under an ancient piece-rate system so Byzantine that every composing room on Fleet Street had a piece-rate book the size of a telephone directory. On top of plump salaries, printers received special bonus payments—sometimes calculated to the eighth decimal place of a penny—for handling type of irregular sizes, for dealing with heavily edited copy, for setting words in a language other than English, for the white space at the ends of lines. If work was done out of house—for instance, advertising copy that was set outside the building—they were compensated for not doing it. At the end of each week, a senior NGA man would tot up all these extras, add a little something for a handy category called “extra trouble occasioned,” and pass the bill to the management. In consequence, many senior printers, with skills no more advanced than you would expect to find in any back-street print shop, enjoyed incomes in the top 2 percent of British earnings. It was crazy and clearly unsustainable.

For years Fleet Street had been living with poor industrial relations – the so-called "Spanish practices" had put limits on the owners that they considered intolerable. On the other hand, the company management team, led by Bill O'Neill,[2] was seeking to have the union accept terms that it considered unacceptable: flexible working, a no-strike clause, the adoption of new technology and the end of the closed shop.

Despite the widespread use of the offset litho printing process elsewhere, the Murdoch papers, in common with the rest of Fleet Street, continued to be produced by the labour-intensive hot-metal linotype method, rather than being composed electronically. Eddie Shah's Messenger Group, in a long-running and bitter dispute at Warrington, had benefited from the Thatcher government's trade union legislation which allowed employers to de-recognise unions, enabling the Messenger Group to use an alternative workforce and new technology in newspaper production. Journalists could input copy directly, which reduced the need for labour in the print halls, cut costs and shortened production time dramatically.

Although individual journalists (many of whom were members of the National Union of Journalists) worked "behind the wire", the NUJ opposed the move to Wapping and urged its members not to do so without proper negotiations. Many members refused to work at Wapping and became known during the dispute as "refuseniks". The NUJ was represented alongside the Print unions in the negotiations with News International which eventually led to a monetary settlement.

Immediately after the strike was announced on 24 January 1986, dismissal notices were served on all those taking part in the industrial action, effectively sacking 6,000 employees. As part of a plan that had been developed over many months, the company replaced the workforce with members of the EETPU and transferred its four main titles (The Times, The Sunday Times, The Sun and the News of the World) to the Wapping plant. Murdoch had led the print unions to think that the Wapping plant was to be used for a new evening newspaper, the London Post. This began what became known as the Wapping dispute.

In support of sacked members, the print unions organized regular demonstrations outside the company's premises in Pennington Street, with six pickets posted on Virginia Street and marches usually converging nearby on The Highway in Wapping. The unions and leading members of the Labour Party also called for a boycott of the four newspapers involved.

The demonstrations outside the Wapping plant were not always peaceful,[3] although the Trade Unions maintained that they were committed to pursuing peaceful means to resolve the dispute. Like the miners' strike, large demonstrations were mounted to dissuade workers - in this case journalists and operators of the new printing process - from entering the premises, and a large police operation used force to ensure they were not able to physically stop the movement of lorries distributing newspapers from the plant. More than 400 police officers and many members of the public were injured, and more than 1,000 arrests made during the dispute. A large-scale police operation was mounted throughout London to ensure the Wapping plant could operate effectively, and the movement of local residents was heavily restricted. To ensure their safety, workers at the plant were often taken to and from work in buses modified to withstand the attacks they came under.

Bill Bryson, then a copy editor at The Times, later described his experience:[1]

The memory engraved in my skull was of throngs of demonstrators, police on horses, and angry pickets, for this was, during the long winter of 1986, the site of the biggest and most violent industrial dispute ever seen in London. On some nights crowds of several thousand would battle with police for hours ... During the dispute it was not just inadvisable for a Murdoch employee to stroll through Wapping, it was positively dangerous ... So unsafe was it, particularly on nights of big demonstrations, that the police often wouldn’t let anyone out of the compound until the small hours.

The print unions had encouraged a national boycott of Murdoch's papers, and had been relying on the rail unions to ensure that they were not distributed, a problem Murdoch circumvented by distributing his papers via road haulage carriers instead of trains. Despite some public sympathy for the plight of the pickets, the boycott of Wapping's news titles was not successful,[4] and not a single day of production was lost throughout the year of the dispute's duration.

News International's strategy in Wapping had strong government support, and enjoyed almost full production and distribution capabilities and a complement of leading journalists. The company was therefore content to allow the dispute to run its course. With thousands of workers having gone for over a year without jobs or pay, the strike eventually collapsed on 5 February 1987.

With the restrictive trade union practices associated with the traditional Fleet Street publishing empires removed, the trade union movement in Britain was irrevocably changed. The actions of News International and Rupert Murdoch, together with the EETPU and the police were criticised[5] — in particular the policing methods that were employed. People in Wapping were largely viewed by the police as sympathetic to the strikers, and were frequently denied access to their own streets and homes.[6] The strike also coincided with the redevelopment of the Docklands, of which Wapping is a part, and saw the end of the traditional association of the area with the Labour Movement.

By 1988, nearly all the national newspapers had abandoned Fleet Street to relocate in the Docklands, and had begun to change their printing practices to those being employed by News International.