Fortuna Air Force Station is a closed United States Air Force General Surveillance Radar station. It is located 4.2 miles (6.8 km) west of Fortuna, North Dakota. It was closed in 1979 as a radar station, remaining as a Long-Range Radar (LRR) facility until 1984.

Fortuna Air Force Station was part of the last batch of twenty-three radar stations constructed as part of the Air Defense Command permanent network. It was activated in April, and declared completely operational in late 1952.

The 780th Aircraft Control and Warning Squadron (AC&W Sq) began operations using AN/FPS-3 search and AN/FPS-4 height-finder radars, and initially the station functioned as a Ground-control intercept (GCI) and warning station. As a GCI station, the squadron's role was to guide interceptor aircraft toward unidentified intruders picked up on the unit's radar scopes. During 1957 an AN/GPS-3 search radar made a brief appearance. Reportedly, an AN/TPS-10D was also briefly used. In 1958 the 780th began operating an AN/FPS-20A search radar that replaced the AN/GPS-3. By 1960 a pair of AN/FPS-6, -6A handled height-finder chores.

During 1961 Fortuna AFS joined the Semi Automatic Ground Environment (SAGE) system, initially feeding data to DC-20 at Malmstrom Air Force Base, Montana. After joining, the squadron was redesignated as the 780th Radar Squadron (SAGE) on 1 August 1961.[1] The radar squadron provided information 24/7 the SAGE Direction Center where it was analyzed to determine range, direction altitude speed and whether or not aircraft were friendly or hostile. Fortuna was incorporated into BUIC I, a manual back-up interceptor control system implemented in 1962. BUIC I provided limited command and control capability in the event the SAGE system was disabled.

In 1964 an AN/FPS-26A height-finder radar was installed, and the AN/FPS-6 was retired. In the winter of 1964, a fierce wind storm blew over the AN/FPS-35 sail; the sail was not replaced until the following year (by the one formerly installed at Manassas Air Force Station, Virginia, reportedly). For the interim, in 1965 an AN/FPS-64 search radar was installed in the former AN/FPS-20A tower; it was removed in 1967 after the AN/FPS-35 was again fully operational. The AN/FPS-90 height-finder radar was removed in 1969. Work proceeded on the installation of BUIC II in 1966, after the installation of a Burroughs CSA-51 computer system, In 1969 it became a BUIC III site.

Over the years, the equipment at the station was upgraded or modified to improve the efficiency and accuracy of the information gathered by the radars. The 780th Radar Sq was inactivated and replaced by the 780th Air Defense Group in March 1970.[1][2] The upgrade to group status was done because of Fortuna AFS' status as a Backup Interceptor Control (BUIC) site. BUIC sites were alternate control sites in the event that SAGE Direction Centers became disabled and unable to control interceptor aircraft. The group was inactivated and replaced by the 780th Radar Squadron.[1][2] as defenses against manned bombers were reduced. The group was disbanded in 1984.[3] Normal operations continued until 1979 when Aerospace Defense Command was inactivated in September and the radar station was inactivated. The GATR site (R-27) was retained until the Joint Surveillance System (JSS) switchover, c. 1984. The Federal Aviation Administration (FAA) opened an unmanned ARSR-4 radar facility about half-way between Sidney, Montana, and Watford City, North Dakota, (just off of Highway 68) before the Fortuna radars were finally decommissioned in 1984.

The station was bought by private investors that stripped the site of anything of value and sold it off. After this "salvage", the site was forfeited to Divide County over a valuation dispute, and now sits half-demolished, useless as a facility, and abandoned. An environmental impact study is currently planned as a precursor to a possible land reclamation effort.

Buildings on the station include:

The Ground to Air Transmitter-Receiver (GATR) facility was located off-station at Lua error in Module:Coordinates at line 668: callParserFunction: function "#coordinates" was not found., roughly one mile south of the main station. 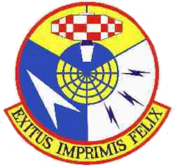