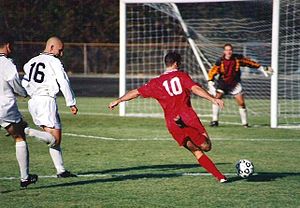 The forward (10, red) is past the defense (white) and is about to take a shot at the goal. The goalkeeper will attempt to stop the forward from scoring a goal by preventing the ball from passing the goal line. 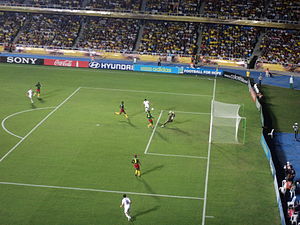 A New Zealand forward (in white) takes a shot on goal against Cameroon in the 2011 FIFA U-20 World Cup.

Forwards are the players on an association football team who play nearest to the opposing team's goal, and are therefore most responsible for scoring goals.

Their advanced position and limited defensive responsibilities mean forwards normally score more goals on behalf of their team than other players.

The centre-forward is often a tall player, typically known as a target man, whose main function is to score the majority of goals on behalf of the team. The player may also be used to win long balls or receive passes and retain possession of the ball as team-mates advance, to help teammates score by providing a pass ('through ball' into the box); the latter variation usually requiring quicker pace. Most modern centre-forwards operate in front of the second strikers or central attacking midfielders, and do the majority of the ball handling outside the box. The present role of centre-forward is sometimes interchangeable with that of an attacking midfielder, especially in the 4–3–1–2 or 4–1–2–1–2 formations. A centre-forward usually must be strong, to win key headers and 'outmuscle' defenders. The term centre-forward is taken from the early football playing formation in which there were five forward players: two outside forwards, two inside forwards, and one centre-forward.

When numbers were introduced in the 1933 English FA Cup final, one of the two centre-forwards that day wore the number nine – Everton's Dixie Dean a strong, powerful forward who had set the record for the most goals scored in one season in English football during the 1927–28 season. The number would then become synonymous with the centre-forward position (only one that day because one team was numbered 1–11 whilst the other was numbered 12–22).[citation needed]

The role of a striker is rather different from that of a traditional centre-forward, although the terms centre forward and striker are used interchangeably.[citation needed] Strikers are known for their ability to peel off defenders and to run into space via the blind side of the defender and to receive the ball in a good goalscoring position, as typified by Ronaldo.[citation needed] They are typically fast players with good ball control and dribbling abilities. A good striker should be able to shoot confidently with both feet, possess great power and accuracy, and have the ability to pass the ball under pressure in breakaway situations. While many strikers also wear the number 9 shirt, the position is traditionally associated with the number 10, and occasionally numbers 7 and 11, though both of these numbers are more common for wingers.[citation needed]

Deep-lying forwards have a long history in the game, but the terminology to describe their playing activity has varied over the years. Originally such players were termed inside forwards, or deep-lying centre-forwards. More recently, two more variations of this old type of player have developed: the second, or shadow, or support, or auxiliary striker and, in what is in fact a distinct position unto its own, the Number 10,[4] Diego Maradona who is often described as an attacking midfielder or the playmaker.

The second striker position is a loosely defined and most often misapplied description of a player positioned somewhere between the out-and-out striker, whether he is a target-man or more of a poacher, and the Number 10 attacking midfielder, while possibly showing some of the characteristics of both. In fact, a coined term, the "nine-and-a-half", has been an attempt to become a standard in defining the position.[5] Conceivably, a Number 10 can alternate as a second-striker provided that he is also a prolific goalscorer, otherwise a mobile forward with good technical ability (dribbling and ball control), who can both score and create opportunities for a less versatile centre-forward, is more suited. Second or support strikers do not tend to get as involved in the orchestration of attacks as the Number 10, nor do they bring as many other players into play, since they do not share the burden of responsibility, functioning predominantly as assist providers.[6] 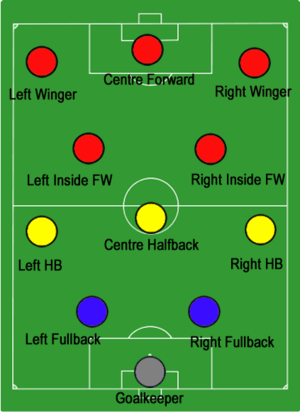 An outside forward plays as the advanced forward on the right or left wing – as an outside right or outside left, typically as part of a 2–3–5 formation or one of its variants. As football tactics have largely developed, and wingers have dropped back to become midfielders, the terminology has changed and "outside forward" has become a historical term. Many commentators and football analysts still refer to the wing positions as "outside right" and "outside left".

The responsibilities of an outside forward include but are not limited to:

Due to these responsibilities some of the most important attributes include: 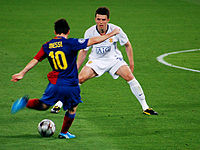 Lionel Messi (10, blue) has been deployed as an inverted winger.

A winger is an attacking player who is stationed in a wide position near the touchlines. They can be classified as forwards, considering their origin as the old "outside-forward" position, and continue to be termed as such in most parts of the world, especially in Latin and Dutch footballing cultures. However, in the British game (in which the 4–4–2 formation and its variants are most commonly used) they are usually counted as part of the midfield.

It is a winger's duty to beat opposing fullbacks, deliver cut-backs or crosses from wide positions and, to a lesser extent, to beat defenders and score from close range. They are usually some of the quickest players in the team and usually have good dribbling skills as well. In their Dutch, Spanish and Portuguese usage, the defensive duties of the winger have been usually confined to pressing the opposition fullbacks when they have the ball. Otherwise, a winger will drop closer to the midfield to make himself available, should his team win back the ball.

In British and other northern European styles of football, the wide-midfielder is expected to track back all the way to his own corner flag should his full-back require help, and also to track back his marker, as well as tucking into the midfield when the more central players are trying to pressure the opposition for the ball, a huge responsibility for attack-oriented players, and particularly those like Joaquín (winger/wide midfielder) or Cristiano Ronaldo (winger/second-striker/trequartista) or Ryan Giggs and John Barnes (winger/central midfielder) who lack the physical attributes of a wing-back or of a more orthodox midfield player. As these players grow older and lose their natural pace, they are frequently redeployed as Number 10s between the midfield and the forward line, where their innate ball control and improved reading of the game in the final third can serve to improve their teams' attacking options in tight spaces. An example is Internazionale's use of veteran Luís Figo behind one or two other attackers.[7]

In recent years there has been a trend of playing inverted wingers – wide men stationed on the 'wrong' side of the pitch, in order to enable them to cut inside and shoot on their stronger foot and sometimes provide in-swinging crosses. This tactic was used by Frank Rijkaard, who whilst at Barcelona, moved Lionel Messi from the left flank onto the right wing, initially against the player's wishes, allowing him to cut into the centre and shoot or cross with his left foot.[8]

Roma captain Francesco Totti was used as a false-9 under Luciano Spalletti.

The False 9, in some ways similar to a more advanced attacking midfielder/playmaker role, is an unconventional lone striker or centre-forward, who drops deep into midfield. The purpose of this is that it creates a problem for opposing centre-backs who can either follow him, leaving space behind them for onrushing midfielders, forwards or wingers to exploit, or leaving him to have time and space to dribble or pick out a pass.

Key attributes for a False 9 are similar to those of a deep-lying striker; dribbling ability to take advantage of space between the lines, good short passing ability to link up with the midfield and vision to play through team-mates making runs from deep to goal.

The first false 9 in a World Cup was Juan Peregrino Anselmo in the Uruguayan national team although he couldn't play the final match versus the Argentine national team of the 1930 FIFA World Cup because of an injury. Matthias Sindelar was the False 9 of the Wunderteam, the Austrian national team, in 1934.[9] A False 9 was also utilized by the Hungarian national team during the beginning of the 1950s, with striker Nándor Hidegkuti acting in the role.

Roma under manager Luciano Spalletti used Francesco Totti, nominally a trequartista, up-front in an innovative "4–6–0" formation;[10] this was met with a run of 11 consecutive victories.

Arsenal under Arsène Wenger utilised Robin van Persie as a False 9, often partnering with Theo Walcott who would move into the box from the flanks, in a false 4–2–3–1.[citation needed]

At Euro 2012, Spain manager Vicente del Bosque, although sometimes using a typical striker in Fernando Torres, used a false 9 in Cesc Fàbregas in several matches, including the final. By the end of 2012, the False 9 had gone 'mainstream' with many clubs employing a version of the system. Barcelona's Lionel Messi has been an exponent of the false 9 position to much success in recent years, first under coach Pep Guardiola and later under Tito Vilanova.[11]

A strike team is two or more strikers who work together. The history of football has been filled with many effective combinations. Three-man teams often operate in "triangles", giving a wealth of attacking options. Four-man packages expand options even more.

Strikers must also be flexible, and be able to switch roles at a moment's notice, between the first (advanced penetrator position), second (deep-lying manoeuvre) and third (support and expansion, e.g. wings) attacker roles.

Another example was the Total Football played by the Dutch team in the 1970s, where the ability of their players, and in particular Johan Cruyff, to swap positions allowed a flexible attacking approach which opposition teams found difficult to effectively mark.