The prison was built by British contractors in the 1950s. The prison held as many as 15,000 inmates in 2001.[citation needed] In 2002, Saddam Hussein's government began an expansion project to add six new cellblocks to the prison.[3] In October 2002, he gave amnesty to most prisoners in Iraq.[citation needed] After the prisoners were released and the prison was left empty, it was vandalized and looted. Almost all of the documents relating to prisoners were piled and burnt inside of prison offices and cells, leading to extensive structural damage. 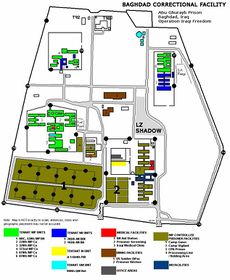 Until August 2006, the site known as the Abu Ghraib prison was used for detention purposes by both the U.S.-led coalition occupying Iraq and the Iraqi government. The Iraqi government has controlled the area of the facility known as "The Hard Site". The prison was used to house only convicted criminals. Suspected criminals, insurgents or those arrested and awaiting trial were held at other facilities, commonly known as "camps" in U.S. military parlance. The U.S. housed all its detainees at "Camp Redemption", which is divided into five security levels. This camp built in the summer of 2004 replaced the three-level setup of Camp Ganci, Camp Vigilant and Abu Ghraib's Tier 1. The remainder of the facility was occupied by the U.S. military.[citation needed]

Abu Ghraib served as both a FOB (Forward Operating Base) and a detention facility. When the U.S. military was using the Abu Ghraib prison as a detention facility, it housed approximately 7,490 prisoners there in March 2004.[5] Later population of detainees was much smaller, because Camp Redemption had a much smaller capacity than Camp Ganci had, and many detainees have been sent from Abu Ghraib to Camp Bucca for this reason. The U.S. military initially held all "persons of interest" in Camp Redemption. Some were suspected rebels, and some suspected criminals. Those convicted by trial in Iraqi court are transferred to the Iraqi-run Hard Site.[citation needed] 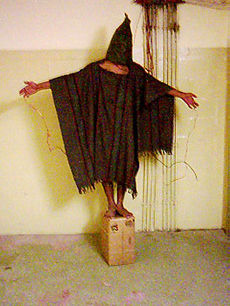 Picture of Ali Shallal al-Qaisi, one of the prisoners subjected to torture and abuse by U.S. guards at Abu Ghraib

In the Abu Ghraib torture and prisoner abuse scandal, reserve soldiers from the 320th Military Police battalion were charged under the Uniform Code of Military Justice with prisoner abuse, beginning with an Army Criminal Investigation Division investigation on January 14, 2004. In April 2004, U.S. television news-magazine 60 Minutes reported on a story from the magazine The New Yorker, which recounted torture and humiliation of Iraqi detainees by U.S. soldiers and contracted civilians. The story included photographs depicting the abuse of prisoners. The events created a substantial political scandal within the U.S. and other coalition countries.

On April 20, 2004, insurgents fired 40 mortar rounds into the prison, killing 24 detainees and injuring 92. Commentators thought the attack was either as an attempt to incite a riot or retribution for detainees' cooperating with the United States.[6] In May 2004, the U.S.-led coalition embarked on a prisoner-release policy to reduce numbers to fewer than 2,000.[citation needed] The U.S. military released nearly 1,000 detainees at the prison during the week ending August 27, 2005, at the request of the Iraqi government.[7] In a May 24, 2004 address at the U.S. Army War College, President George W. Bush announced that the prison would be demolished. On June 14 Iraqi interim President Ghazi Mashal Ajil al-Yawer said he opposed this decision, followed by the ruling June 21 by U.S. military judge Col. James Pohl, who said that the prison was a crime scene and could not be demolished until investigations and trials were completed.[citation needed]

On April 2, 2004,[8] the prison was attacked by more than 60 insurgents in the engagement known as the Battle of Abu Ghraib. In the two hours before being forced to retreat, the attackers suffered at least 50 casualties according to the U.S. military. Thirty-six persons at or in the prison, including U.S. military personnel, civilians and detainees, were injured in the attack. The attackers used small arms, rockets, and RPGs as weapons, and threw grenades over the walls. A suicide VBIED detonated just outside the front wall after Marines fired on it. Officials believe that the car bomb was intended to breach the prison wall, enabling an assault and/or mass escape for detainees. Insurgents also attacked military forces nearby on highways en route to the prison for reinforcement and used ambushes along the roads. Al Qaeda in Iraq claimed responsibility.[9]

In March 2006, the U.S. military decided to transfer the 4,500 inmates to other prisons and transfer control of the Abu Ghraib prison to Iraqi authorities.[10] The prison was reported emptied of prisoners in August 2006.[11] The formal transfer was made on September 2, 2006. The formal transfer was conducted between Major General Jack Gardner, Commander of Task Force 134, and representatives of the Iraqi Ministry of Justice and the Iraqi Army.[12]

In February 2009, Iraq reopened Abu Ghraib under the new name of Baghdad Central Prison. It was designed to house 3,500 inmates. The government said it planned to increase the number up to 15,000 prisoners by the end of the year.[13]

A major prison break occurred on 21 July 2013, and media outlets reported a mass breakout of prisoners at Abu Ghraib. Reportedly, at least 500 prisoners escaped. A senior member of the security and defense committee in parliament described the prisoners as mostly those who were "convicted senior members of al-Qaeda and had received death sentences."[14][15] A simultaneous attack occurred at another prison, in Taji, around 12 miles north of Baghdad, where 16 members of the Iraqi security forces and six militants were killed.[15] The Islamic State of Iraq and the Levant (ISIL) issued a statement on a jihadist forum claiming that they were responsible for organising and executing the prison break, which had taken months of preparation,[14] and claimed that the attacks involved 12 car bombs, suicide bombers and a barrage of mortars and rockets.[14] They also claimed that they killed more than 120 government troops, though the Iraqi authorities claimed that 25 members of the security forces were killed, along with 21 prisoners and at least 10 militants.[14]

On April 15, 2014 the Iraqi Justice Ministry announced that it had closed the prison amid fear that it could be taken over by Sunni insurgents that control much of Anbar Province. All 2,400 inmates were moved to other high-security facilities in around the country. It was not made clear if the closure is temporary or permanent.[citation needed]