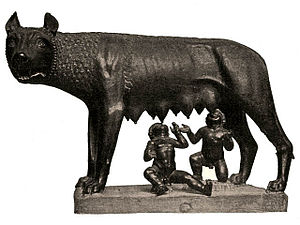 The she-wolf feeding the twins Romulus and Remus, the most famous image associated with the founding of Rome

The founding of Rome can be investigated through archaeology, but traditional stories handed down by the ancient Romans themselves explain the earliest history of their city in terms of legend and myth. The most familiar of these myths, and perhaps the most famous of all Roman myths, is the story of Romulus and Remus, the twins who were suckled by a she-wolf.[1] This story had to be reconciled with a dual tradition, set earlier in time, the one that had the Trojan refugee Aeneas escape to Italy and found the line of Romans through his son Iulus, the namesake of the Julio-Claudian dynasty.[2] 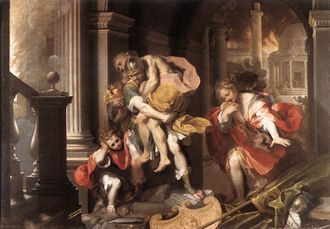 The national epic of mythical Rome, the Aeneid of Virgil, tells the story of how the Trojan prince Aeneas came to Italy. The Aeneid was written under Augustus, who claimed ancestry through Julius Caesar from the hero and his mother Venus. According to the Aeneid, the survivors from the fallen city of Troy banded together under Aeneas, underwent a series of adventures around the Mediterranean Sea, including a stop at newly founded Carthage under the rule of Queen Dido, and eventually reached the Italian coast. The Trojans were thought to have landed in an area between modern Anzio and Fiumicino, southwest of Rome: probably at Laurentum, or in other versions, at Lavinium, a place named for Lavinia, the daughter of King Latinus, whom Aeneas married. This started a series of armed conflicts with Turnus over the marriage of Lavinia.[3] Before the arrival of Aeneas, Turnus was engaged to Lavinia, who then married Aeneas, starting the war.[3] Aeneas won the war and killed Turnus.[3] The Trojans won the right to stay and to assimilate with the local peoples. The young son of Aeneas, Ascanius, also known as Iulus, went on to found Alba Longa and the line of Alban kings who filled the chronological gap between the Trojan saga and the traditional founding of Rome in the 8th century BC.

Toward the end of this line, King Procas was the father of Numitor and Amulius. At Procas' death, Numitor became king of Alba Longa, but Amulius captured him and sent him to prison; he also forced the daughter of Numitor, Rhea Silvia, to become a virgin priestess among the Vestals. For many years Amulius was then the king. The tortuous nature of the chronology is indicated by Rhea Silvia's ordination among the Vestals, whose order was traditionally said to have been founded by the successor of Romulus, Numa Pompilius.

The myth of Aeneas, Greek in origin, had to be reconciled with the Italian myth of Romulus and Remus, who, taken as historical figures, would have been born around 771 BC. They were purported to be sons of Rhea Silvia and Mars, the god of war. Because of a prophecy that they would overthrow their great-uncle Amulius, who had overthrown Silvia's father Numitor, they were, in the manner of many mythological heroes, abandoned at birth; in this case, on the Tiber River by servants who took pity on the infants, despite their orders. The twins were nurtured by a she-wolf until a shepherd named Faustulus found and took Romulus and Remus as his sons. Faustulus and his wife, Acca Larentia, raised the children. When Remus and Romulus became adults, they killed Amulius and restored Numitor. They decided to establish a city; however, they quarreled, and Romulus killed his brother. Thus Rome began with a fratricide, a story that was later taken to represent the city's history of internecine political strife and bloodshed.

During the Roman Republic, several dates were given for the founding of the city between 753 BC and 728 BC. Finally, under the Roman Empire, the date suggested by Marcus Terentius Varro, 753 BC, was agreed upon, but in the Fasti Capitolini the year given was 752. Although the proposed years varied, all versions agreed that the city was founded on April 21, the day of the festival sacred to Pales, goddess of shepherds; in her honour, Rome celebrated the Par ilia (or Palilia). (The Roman a.u.c. calendar, however, begins with Varro's dating of 753 BC.)

According to legend, the foundation of Rome took place 438 years after the capture of Troy (1182 BC), according to Velleius Paterculus (VIII, 5). It took place "shortly" before an eclipse of the sun; some have identified this eclipse as the one observed at Rome on June 25, 745 BC, which had a magnitude of 50.3%. Varro may have used the consular list with its mistakes, calling the year of the First consuls "245 a.u.c.".

According to Lucius Tarrutius of Firmum, Romulus was conceived on the 23rd day of the Egyptian month Choiac, during a total eclipse of the sun. This eclipse occurred on June 15, 763 BC, with a magnitude of 62.5% at Rome. He was born on the 21st day of the month of Thoth. The first day of Thoth fell on 2 March in that year (Prof. E. J. Bickerman, 1980: 115), That implies that Rhea Silvia's pregnancy lasted for 281 days. Rome was founded on the ninth day of the month Pharmuthi, which was April 21, as universally agreed. The Romans add that, about the time Romulus started to build the city, an eclipse of the Sun was observed by Antimachus, the Teian poet, on the 30th day of the lunar month. This eclipse (see above) had a magnitude of 54.6% at Teos, Asia Minor. Romulus vanished in the 54th year of his life, on the Nones of Quintilis (July), on a day when the Sun was darkened. The day turned into night, which sudden darkness was believed to be an eclipse of the Sun. It occurred on July 17, 709 BC, with a magnitude of 93.7%. (All these eclipse data have been calculated by Prof. Aurél Ponori-Thewrewk, retired director of the Planetarium of Budapest.) Plutarch placed it in the 37th year from the foundation of Rome, on the fifth of our month July, then called Quintiles, on "Caprotine Nones". Livy (I, 21) also states that Romulus ruled for 37 years. He was slain by the Senate or disappeared in the 38th year of his reign. Most of these have been recorded by Plutarch (Lives of Romulus, Numa Pompilius and Camillus), Florus (Book I, I), Cicero (The Republic VI, 22: Scipio's Dream), Dio (Dion) Cassius and Dionysius of Halicarnassus (L. 2). Dio, in his Book I of his Roman History, confirms these data by telling that Romulus was in his 18th year of age when he founded Rome. Therefore, three eclipse records indicate that Romulus reigned from 746 BC to 709 BC. Surprisingly this is very close to the calculation of the founding given by Rome's first native historical writer, Quintus Fabius Pictor, who wrote that Rome was founded in the first year of the eighth Olympiad, 747 BC (Dionysius of Halicarnassus, Book 1, ch. 74,2).

Recent discoveries on Palatine Hill in Rome have offered the date of Rome's founding. Chief among these is a series of fortification walls on the north slope of Palatine Hill that can be dated to the middle of the 8th century BC, when legend says that Romulus plowed a furrow (sulcus) around the Palatine Hill in order to mark the boundary of his new city. The remains of the wall and other evidence like it have been discovered by the Excavations of Andrea Carandini.

The name of Rome

The name of the city is generally considered to refer to Romulus, but there are other hypotheses. Jean-Jacques Rousseau (1712–1778) suggested Greek "ῥώμη" (rhōmē), meaning "strength, vigor".[4] A modern theory of etymology holds that the name of the city (and perhaps the city itself, though this cannot be proven) is of Etruscan origin, deriving from rumon, "river".[5]:106

The name "Romulus" is probably a back-formation;[6] that is, the name "Romulus" was derived from the word "Rome". The suffix "-ulus" is masculine and a diminutive, so "Romulus" means "the little boy from Rome."

The original Italian people inhabited the Alban Hills.[when?] They later moved down into the valleys, which provided better land for agriculture. The area around the Tiber river was particularly advantageous and offered notable strategic resources: the river was a natural border on one side, and the hills could provide a safe defensive position on the other side. This position would also have enabled the Latins to control the river and the commercial and military traffic on it from the natural observation point at Isola Tiberina. Moreover, road traffic could be controlled since Rome was at the intersection of the principal roads to the sea coming from Sabinum (in the northeast) and Etruria (to the northwest).

The development of the town is presumed to have started from the development of separate small villages, located at the tops of hills, that eventually accreted to form Rome. In any case, the location that was to become the city of Rome was inhabited by Latin settlers from various regions, farmers and pastoralists, as evidenced by differences in pottery and burial techniques.[5]:107

Although recent studies suggest that the Quirinal hill was very important in ancient times, the first hill to be inhabited seems to have been the Palatine (therefore confirming the legend), which is also at the center of ancient Rome. Its three peaks, the minor hills (Cermalus or Germalus, Palatium, and Velia), were united with the three peaks of the Esquiline (Cispius, Fagutal, and Oppius), and then villages on the Caelian Hill and Suburra.

These hills had expressive names. The Caelian Hill was also called Querquetulanus, from "quercus"" (oak), and "Fagutal" (pointing to beech-woods, from "fagus" meaning "beech"). Recent discoveries revealed that the Germalus on the northern part of the Palatine was the site of a village (dated to the 9th century BC) with circular or elliptic dwellings. It was protected by a clay wall (perhaps reinforced with wood), and it is likely that this is where Rome was really founded.

The territory of this federation was surrounded by a sacred border called the pomerium, which enclosed the so-called e Servian expansion of Rome.

Festivals for the Septimontium (literally "of the seven hills"), on December 11, were in the past considered related to the foundation. However, because April 21 is the only date for Rome's foundation upon which all the legends agree, it has been recently argued that Septimontium celebrated the first federations among Roman hills: a similar federation was, in fact, celebrated by the Latins at Cave, Italy, or at Monte Cavo (in Castelli).

During the Italian Renaissance, a group of humanists affiliated with the Roman Academy formed a sodality to pursue antiquarian interests, celebrating the "birthday of Rome" annually on April 20. In 1468, the Academy had been suppressed by Pope Paul II for fomenting "republicanism, paganism, and conspiracy", but the sodality was reinstated about ten years later under Sixtus IV as the Societas Literatorum S. Victoris in Esquiliis ("Literary Society of Saint Victor on the Esquiline"). The reformed group placed itself under the new patronage of the saints Victor, Fortunatus, and Genesius, "whose feast day was conveniently proven to coincide with the Palilia". Organized by Pomponio Leto, their "Palilia" featured speeches, a communal meal, and a poetry competition.[7]