The Four Courts (Irish: Na Ceithre Cúirteanna[1]) is Ireland's main courts building, located on Inns Quay in Dublin. The Four Courts are the location of the Supreme Court, the High Court and the Dublin Circuit Court. Until 2010 the building also housed the Central Criminal Court.

File:Four-courts-statue.jpg
Part of the original Gandon-designed interior decoration of the dome, lost in the 1922 destruction

Work based on the design of Thomas Cooley for the Public Records Office of Ireland, began in 1776. After his death in 1784 renowned architect James Gandon was appointed to finish the building, which we recognise today as the Four Courts. It was built between 1786 and 1796, while the finishing touches to the arcades and wings were completed in 1802.[2] The lands were previously used by the King's Inns. The building originally housed the four courts of Chancery, King's Bench, Exchequer and Common Pleas, hence the name of the building. A major revision in the court system in the late nineteenth century saw these courts merged into a new High Court of Ireland, but the building has retained its historic name. This courts system remained until 1924, when the new Irish Free State introduced a new courts structure, replacing the High Court of Ireland, the Lord Chief Justice of Ireland and the Lord Chancellor of Ireland with a Supreme Court of Justice presided over by the Chief Justice and a High Court of Justice, presided over by the President of the High Court. In 1961 the words "of justice" were dropped from the names of both courts when they were belatedly re-established consequent upon the enactment of the 1937 Constitution.

The Four Courts and surrounding areas were held by Commandant Ned Daly's 1st Battalion during the Easter Rising in 1916. Some of the most intense fighting of Easter Week took place in the Church Street/North King Street/North Brunswick Street area. At the end of the week the Four Courts building itself became the headquarters of the 1st Battalion. 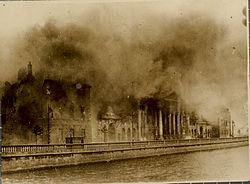 The Four Courts on fire during the Civil War

On 14 April 1922 they were occupied by Republican forces led by Rory O'Connor who opposed the Anglo-Irish Treaty. After several months of a stand-off, the new Provisional Government attacked the building to dislodge the rebels, on the advice of the Commander-in-Chief of the National Army, Michael Collins. This provoked a week of fighting in Dublin. In the process of the bombardment the historic building was destroyed. Most dramatically however, when the anti-Treaty contingent were surrendering, the west wing of the building was obliterated in a huge explosion, destroying the Irish Public Record Office which was located at the rear of the building. It has been alleged that the Republicans deliberately booby-trapped its Irish archives, which were stored in the basement of the Four Courts. Nearly one thousand years of archives were destroyed by this act. However, the insurgents, who included future Taoiseach Seán Lemass, denied this accusation and argued that while they had used the archive as a store of their ammunition, they had not deliberately mined it. They suggest that the explosion was caused by the accidental detonation of their ammunition store during the fighting.

For a decade, the old courts system (until 1924), then the new Free State courts system, were based in the old viceregal apartments in Dublin Castle. In 1932, a rebuilt and remodelled Four Courts was opened. However, much of the decorative interior of the original building had been lost and, in the absence of documentary archives (some of which had been in the Public Records Office and others of which were among the vast amount of legal records lost also), and also because the new state did not have the funds, the highly decorative interior was not replaced. Two side wings were rebuilt further from the river to undo the problem caused by excessively narrow footpaths outside the building. However, that change, and the removal of chimney-stacks, has removed some of the architectural unity and effect planned by Gandon in 1796.

In the early 1990s, the then Chief Justice suggested building a new purpose-built building to house the Supreme Court, leaving the other courts in situ. For the present, however, the Supreme Court remains in the Four Courts.

Prior to 2010 both civil and serious trials were heard in the Four Courts which was also the location for the Court of Criminal Appeal. With the opening of a new criminal courts complex in January 2010 – the Criminal Courts of Justice beside the Phoenix Park – all criminal trials were transferred there.[3][4] The Four Courts remaining in use for civil matters.[3] The Court of Criminal Appeal also moved to the new building but it also occasionally sits in the Four Courts.