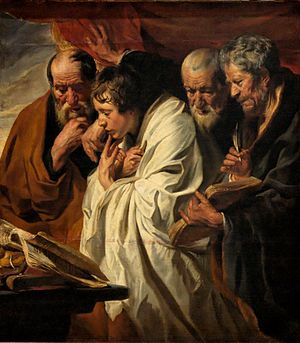 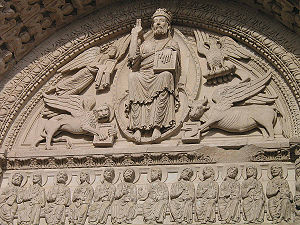 The four winged creatures that symbolise the Four Evangelists surround Christ in Majesty on the Romanesque tympanum of the Church of St. Trophime in Arles 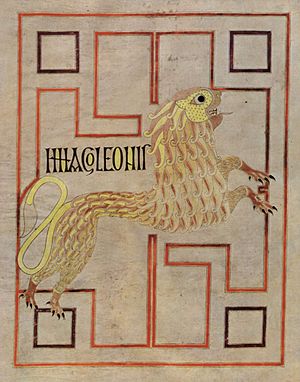 The lion symbol of St. Mark from the Echternach Gospels, here without wings.

The gospels of Matthew, Mark, and Luke are known as the Synoptic Gospels, because they include many of the same stories, often in the same sequence. Convention traditionally holds that the authors were two of the Twelve Apostles of Jesus, John and Matthew, as well as two "apostolic men,"[1] Mark and Luke:

They are called evangelists, a word meaning "people who proclaim good news," because their books aim to tell the "good news" ("gospel") of Jesus.[2]

In iconography, the evangelists often appear in Evangelist portraits derived from classical tradition, and are also frequently represented by the symbols which originate from the four "living creatures" that draw the throne-chariot of God, the Merkabah, in the vision in the Book of Ezekiel (Chapter 1) reflected in the Book of Revelation (4.6-9ff), though neither source links the creatures to the Evangelists. Images normally, but not invariably, appear with wings like angels. The meanings accruing to the symbols grew over centuries, with an early formulation by Jerome,[3] and were fully expressed by Rabanus Maurus, who set out three layers of meaning for the beasts, as representing firstly the Evangelists, secondly the nature of Christ, and thirdly the virtues required of a Christian for salvation:[4] One might note that these animals may[original research?] have originally have been seen as representing the highest forms of the various types of animals, i.e., man, the king of creation as the image of the Creator; the lion as the king of beasts of prey (meat-eating); the ox as the king of domesticated animals (grass-eating) and the eagle as the king of the birds. 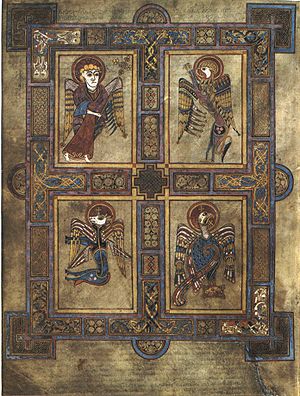 The symbols of the four Evangelists are here depicted in the Book of Kells. The four winged creatures symbolize, clockwise from top left, Matthew, Mark, John, and Luke.

Each of the symbols is depicted with wings, following the biblical sources first in Ezekiel 1-2, and in Revelation. The symbols are shown with, or in place of, the Evangelists in early medieval Gospel Books, and are the usual accompaniment to Christ in Majesty when portrayed during the same period, reflecting the vision in Revelation. They were presented as one of the most common motifs found on church portals and apses, as well as many other locations. When surrounding Christ, the figure of the man usually appears at top left – above Christ's right hand, with the lion above Christ's left arm. Underneath the man is the ox and underneath the lion is the eagle. This both reflects the medieval idea of the order of "nobility" of nature of the beasts (man, lion, ox, eagle) and the text of Ezekiel 1.10. From the thirteenth century their use began to decline, as a new conception of Christ in Majesty, showing the wounds of the Passion, came into use.[5] Sometimes in Evangelist portraits they appear to dictate to the writing evangelist.

It has become customary to speak of "the Gospel of Matthew" ... "the Gospel of John", not least because it is shorter and rolls much more smoothly off the tongue; but it is worth noting that the ancient titles do not use the genitive of possession, but the preposition "according to", signifying that each evangelist sets forth the one "Gospel of God" according to his own capacity, but not in the sense of creating his own story.

Miniatures from the Grandes Heures of Anne of Brittany, Queen consort of France (1477-1514) 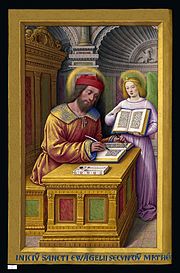 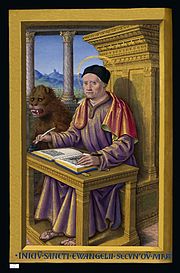 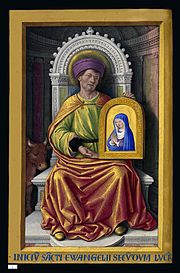 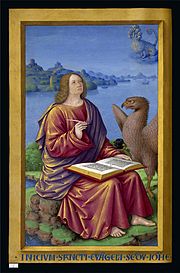 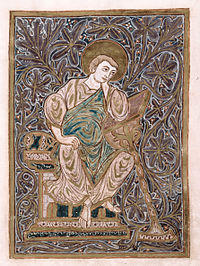 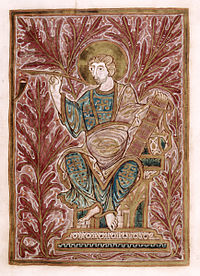 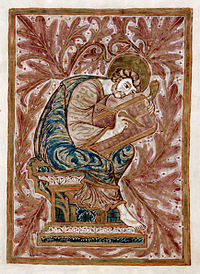 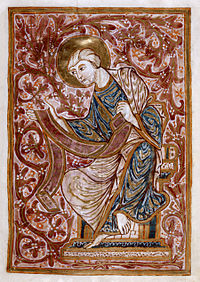