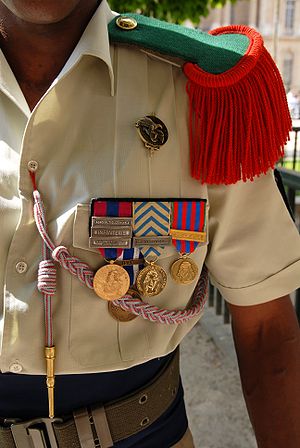 Blue and red fourragère of the Croix de Guerre TOE worn by a soldier of the 2nd Foreign Infantry Regiment (2e REI). The fourragère is the braided cord passing under the medals and around the soldier's side.

The fourragère is a military award, distinguishing military units as a whole, that is shaped as a braided cord. The award has been firstly adopted by France, followed by other nations such as the Netherlands, Belgium, Portugal, and Luxembourg. The latter has not been awarded to foreign units.

As a regimental distinction the fourragère should not be confused with the aiguillette (distinctive insignia of the aide-de-camp) which was introduced by Napoleon I and which it closely resembles (the aiguillette is merely a golden fourragère).

The modern fourragère of the French Army is awarded to all members of military units which have been awarded a mention in despatches. It should not be confused with unit awards of particular decorations, where the medal itself is hung on the flag of the unit. For example, there are many units wearing the fourragère of the médaille militaire, whereas only six units wore the medal on their flags. See also the article dealing with the Croix de Guerre.

It was introduced during the First World War, when the French Ministry of War first awarded the fourragère to units which had been recorded as distinguishing themselves more than once in the Orders of the Army. There were then six fourragères, depending on the numbers of Mentions in Dispatches awarded to the unit:

If a unit received this distinction in both the First and Second World Wars, its fourragère bears two olives, one for each conflict it earned mentions. These olives are different:

During the Second World War, the medal of the Ordre de la Libération was awarded to the flags of 17 military units, whose members now wear a fourragère since June 18, 1996. This fourragère is considered the top unit award in the French military, as the ordre de la Libération award is seen to be more important than any mention in Dispatches.

Fourragères used by the French Foreign Legion are:

Personal wear of the fourragère 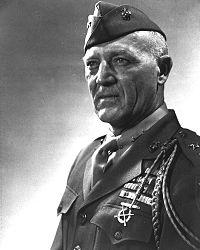 General Graves B. Erskine wears the fourragère with the cords hanging over the sleeve, a mark of being in the military unit when the award was made. Soldiers and Marines who are later assigned to the unit do not wear the outside cords. Graves B. Erskine, then platoon leader in the 6th Marine Regiment, was authorized to wear the fourragère as an individual decoration.

The Military William Order, or often named Military Order of William, is the oldest and highest honour of the Kingdom of the Netherlands. The Order's motto is Voor Moed, Beleid en Trouw (For Bravery, Leadership and Loyalty). The chivalric order was established on 30 April 1815 by King William I and was presented for feats of excellent bravery on the battlefield and as a meritorious decoration to senior military officers. Comparable with the French Légion d'Honneur but far less awarded, the Military William Order is a chivalry order of merit open to everyone regardless of rank and nobility, and not only to Dutch military but also foreigners. To date the Order is extremely rarely awarded and only for excellent bravery in battle.

US Army blouse with Belgian fourragère

The Belgian fourragère of 1940 was created by Prince Charles of Belgium, Regent of the Kingdom to honour certain military formations that distinguished themselves during the Second World War. It consists of three cords terminated by a knot and a metal tag, and is braided in red and green; the colours of the Belgian Croix de guerre of 1940. The fourragère is in cotton for non-commissioned officers and soldiers and in silk for officers.

The Luxembourg Army currently awards an orange and blue fourragère.[6]

Portugal has three fourragères: the War Cross (red and green), the Military Valor Medal (blue and white) and the Order of the Tower and Sword (solid blue).

The Vietnam Gallantry Cross is the equivalent of the French Croix de Guerre. It was created by Decree No 74-b/Qt dated 15 August 1950 and Decree No 96/DQT/HC dated 2 May 1952. Both individuals (denoted by a star) and formations (denoted by a palm) cited for gallantry were awarded the decoration. Formations that were awarded the Gallantry Cross for two or more occasions were initially authorized to wear a fourragère.[7]

The Vietnam Civil Action is another of the South Vietnamese fourragères. In appearance it resembled the Republic of Vietnam Cross of Gallantry, but rather than yellow and red, it was green and red. Formations that were awarded the medal or emblem for two or more occasions are authorized to wear a fourragère. Many units and individuals were awarded one award, but few were presented with a second award.[8]

Fourragères are often worn as decorative items to liven up ceremonial uniforms in military, police, and cadet organisations. Members of the United States and Canadian 1st Special Service Force wore a red, white, and blue fourragère made out of parachute shroud lines. [9]