The Fourth Air Force (4 AF) is a numbered air force of the United States Air Force Reserve (AFRC). It is headquartered at March Air Reserve Base, California.

4 AF directs the activities and supervises the training of more than 30,000 Air Force Reservists. If called to active duty, 4 AF's ready reserve units would be assigned to Air Mobility Command.

One of the four original pre–World War II numbered air forces, 4 AF was activated on 18 December 1940, at March Field, California with a mission of air defense of the Southwestern United States and Lower Midwest regions. During the war, its primary mission became the organization and training of combat units prior to their deployment to the overseas combat air forces.

4 AF is commanded by Maj Gen Mark A. Kyle.

Fourth Air Force is dedicated to ensuring its units and personnel are fully prepared to accomplish all assigned missions in support of national objectives. The sixty person staff consists of Traditional Reservists, Air Reserve Technicians and civilian employees. They direct the activities and supervise the equipping and training of more than 30,000 Air Force reservists in unit programs located across the continental United States, Alaska, Hawaii and Guam. Reservists from 4 AF units are routinely deployed to Air Expeditionary units in combat areas of Central and Southwest Asia as part of the Global War on Terrorism. 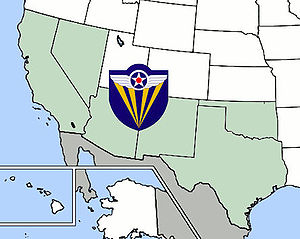 During World War II Fourth Air Force was the primary air defense command for the West Coast. The command also flew antisubmarine patrols along coastal areas of the Gulf of Mexico from after Pearl Harbor until October 1942. One of its primary fighter units was the 10th Fighter Wing at Hamilton Field, California.

On 29 September 1942, Rice Municipal Airport located in the Desert Training Center was acquired by the IV Air Support Command, and was operational by 26 October 1942. Re-designated Rice AAF it was used to train pilots and crews of aircraft whose mission it was to support ground troops.

Beginning in May 1942, the mission of Fourth Air Force became operational training of units and crews, and the replacement training of individuals for bombardment, fighter, and reconnaissance operations. It received graduates of Army Air Forces Training Command flight schools; navigator training; flexible gunnery schools and various technical schools, organized them into newly activated combat groups and squadrons, and provided operational unit training (OTU) and replacement training (RTU) to prepare groups and replacements for deployment overseas to combat theaters. The Fourth Air Force became predominantly a fighter OTU and RTU organization. Most P-51 Mustang and P-38 Lightning groups were trained by Fourth Air Force primarily due to the proximity of their manufacturing plants in Southern California. By 1944, most of the Operational Training of groups ended, with the command concentrating on RTU training of individual replacements using Army Air Force Base Units (AAFBU) as training organizations at the airfields controlled by Fourth Air Force.

On 13 December 1944, First, Second, Third and Fourth Air Force were all were placed under the unified command of the Continental Air Forces.

In March 1946, USAAF Chief General Carl Spaatz had undertaken a major re-organization of the postwar USAAF that had included the establishment of Major Commands (MAJCOM), who would report directly to HQ United States Army Air Forces. Continental Air Forces was inactivated, and Fourth Air Force was assigned to the postwar Air Defense Command in March 1946 and subsequently to Continental Air Command (ConAC) in December 1948 being primarily concerned with air defense.

The command was headquartered at Hamilton AFB, California and originally assigned the region of the CONUS west of the Rocky Mountains, roughly from the Pacific Ocean coast east to the eastern borders of, and . It was also responsible for training Air Force Reserve and Air National Guard personnel throughout the region.

By 1949 with the establishment of the Western Air Defense Force (WADF), the air defense mission of the command was transferred to WADF, leaving Fourth AF free to focus on its reserve training tasks, which it did for the next decade. On 1 September 1960, Air Defense Command inactivated Fourth Air Force, transferring its reserve training mission to the Sixth Air Force Reserve Region.

Fourth Air Force was re-activated on 20 January 1966 again at Hamilton AFB, as part of Air Defense Command with the inactivation of its organization of Air Defense Sectors. Its area of responsibility was essentially unchanged from its 1948 region. Subordinate organizations assigned by ADC were the 25th 26th and 27th Air Divisions.

On 16 January 1968 Air Defense Command was re-designated Aerospace Defense Command (ADCOM) as part of a restructuring of USAF air defense forces. Fourth Air Force's second period of service was short lived, however, and the command was again inactivated as the result of a major ADCOM reorganization on 31 December 1969 of the First Fourth, Tenth Air Forces and several Air Divisions. This reorganization was the result of the need to eliminate intermediate levels of command in ADCOM driven by budget reductions and a perceived lessening of the need for continental air defense against attacking Soviet aircraft.

ADCOM reassigned the units under the inactivated Fourth Air Force were reassigned primarily to the 25th and 26th Air Divisions. 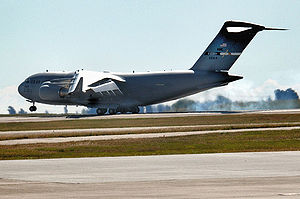 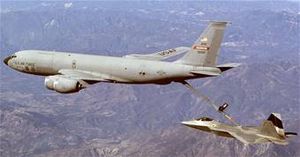 A KC-135R Stratotanker from the 434th Air Refueling Wing refuels an F-22A from the 1st Fighter Wing, Langley Air Force Base, Virginia

Since the end of the Cold War, Fourth Air Force has supported humanitarian missions such as Provide Promise in the Balkans and Provide Relief and Restore Hope in Somalia. Units rushed to provide aid and rescue service to the residents of Florida, the Gulf Coast, and the Caribbean in the aftermath of the traumatic and prolonged 1995 hurricane season. It supported immediate assistance to aid victims and disaster officials following the bombing of the Oklahoma City Federal Building. Fourth Air Force units provided assistance for several natural disasters, including the Northridge (Los Angeles) earthquake in 1994, and the catastrophic midwest floods and the California wildfires in 1993.

Activated in the Reserve on 8 October 1976
Redesignated Fourth Air Force on 1 December 1985.

The Museum is located off the grounds of the Base and displays in its aircraft collection examples bombers, fighters, cargo, refueling and reconnaissance aircraft, many of which served at March Field, March AFB and/or March ARB.