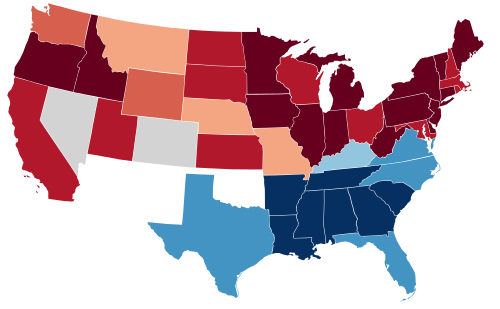 The Fourth Party System is the term used in political science and history for the period in American political history from about 1896 to 1932 that was dominated by the Republican Party, excepting the 1912 split in which Democrats held the White House for eight years. American history texts usually call it the Progressive Era. The concept was introduced under the name "System of 1896" by E.E. Schattschneider in 1960, and the numbering scheme was added by political scientists in the mid-1960s.[1]

The period featured a transformation from the issues of the Third Party System, which had focused on the American Civil War, Reconstruction, race and monetary issues. The era began in the severe depression of 1893 and the extraordinarily intense election of 1896. It included the Progressive Era, World War I, and the start of the Great Depression. The Great Depression caused a realignment that produced the Fifth Party System, dominated by the Democratic New Deal Coalition until the 1960s.

The period began with the realignment of 1894–1896. The overwhelming Republican victory in 1896 over William Jennings Bryan and his Democratic Party, repeated in 1900, restored business confidence, inaugurated a long epoch of prosperity (shown in the table), and swept away most of the issues and personalities of the Third Party System. Most voting blocs continued unchanged, but some realignment took place, giving Republicans dominance in the industrial Northeast and new strength in the border states. Thus the way was clear for the Progressive Movement to impose a new way of thinking and a new agenda for politics.

Alarmed at the new rules of the game for campaign funding, the Progressives launched investigations and exposures (by the "muckraker" journalists) into corrupt links between party bosses and business. New laws and constitutional amendments weakened the party bosses by installing primaries and directly electing senators.[2] Theodore Roosevelt shared the growing concern with business influence on government. When William Howard Taft appeared to be too cozy with pro-business conservatives in terms of tariff and conservation issues, Roosevelt broke with his old friend and his old party. He crusaded for president in 1912 at the head of an ill-fated "Bull Moose" Progressive party. TR's schism helped elect Woodrow Wilson in 1912 and left pro-business conservatives as the dominant force in the GOP. The latter elected Warren G. Harding and Calvin Coolidge. In 1928 Herbert Hoover became the last president of the Fourth Party System.

Many of the Progressives, especially in the Democratic Party, supported labor unions. Unions did become important components of the Democratic Party during the Fifth Party System. However, historians have long debated why no Labor Party emerged in the United States, in contrast to Western Europe.[3]

Gustafson (1997) shows that women vigorously define their role in political parties from the 1880s to 1920. Traditionally viewed as nonpartisan, women generally formed auxiliaries to the Republican and Democratic parties. The formation of the Progressive Party in 1912 offered women a chance for equality. Progressive party supporter Jane Addams openly advocated women's partisanship. After the Progressive Party loss in 1912, partisan women continued to form auxiliaries in the major parties. After 1920, inclusion and power in political parties persisted as issues for partisan women. Suffragists shifted from an emphasis on their right to vote to a new emphasis on the need for women to purify politics and guide policy toward education. The suffrage movement gained strength during the World War, and at the end women received the vote, in a major change in the rules of the game.

In most of the country prohibition was of central importance in progressive politics before World War I, with a strong religious and ethnic dimension.[6] Most pietistic Protestants were "dries" who advocated prohibition as a solution to social problems; they included Methodists, Congregationalists, Disciples, Baptists, Presbyterians, Quakers, and Scandinavian Lutherans. On the "wet" side, Episcopalians, Irish Catholics, German Lutherans and German Catholics attacked prohibition as a menace to their social customs and personal liberty. Prohibitionists supported direct democracy to enable voters to bypass the state legislature in lawmaking. In the North, the Republican Party championed the interests of the prohibitionists, while the Democratic Party represented ethnic group interests. In the South, the Baptist and Methodist churches played a major role in forcing the Democratic party to support prohibition. After 1914 the issue shifted to the Germans' opposition to Woodrow Wilson's foreign policy. In the 1920s, however, the sudden, unexpected outburst of big city crime associated with bootlegging undermined support for prohibition, and the Democrats took up the cause for repeal, finally succeeding in 1932.[7][8][9]

The Spanish–American War in 1898 precipitated the end of the Spanish Empire in the Caribbean and the Pacific, with the 1898 Treaty of Paris giving the US control over the former Spanish colonies. Permanent ownership of the Philippines was a major issue in the 1900 presidential election. Bryan, although strongly supportive of the war against Spain, denounced the permanent acquisition of the Philippines, which was strongly defended by Republicans, especially the Vice-Presidential nominee Theodore Roosevelt.[10] President Roosevelt in 1904 boasted of his success in gaining control of the Panama Canal, in 1903. Democrats attacked the move, but their attempt to apologize to Colombia failed.[11]

The United States also appeared on the world scene in the last years of World War I. President Woodrow Wilson tried to negotiate peace in Europe, but when Germany began unrestricted submarine warfare against American shipping in early 1917 he called on Congress to declare war. Ignoring military affairs, he focused on diplomacy and finance. On the home front he began the first effective draft in 1917, raised billions through Liberty loans, imposed an income tax on the wealthy, set up the War Industries Board, promoted labor union growth, supervised agriculture and food production through the Food and Fuel Control Act, took over control of the railroads, and suppressed left-wing anti-war movements. Like the European states, the United States experimented with a war economy. In 1918, Wilson advocated various international reforms in the Fourteen Points, among them public diplomacy, freedom of navigation, "equality of trade conditions" and removal of economic barriers, an "impartial adjustment of all colonial claims," the creation of a Polish state, and, most important, the creation of an association of nations. The latter would become the League of Nations. The League became highly controversial as Wilson and the Republicans refused to compromise. Voters in 1920 showed little support for the League and the U.S. never joined. Peace was a major political theme in the 1920s (especially because women were now voting). Under the Harding administration, the Washington Naval Conference of 1922 achieved significant naval disarmament for ten years.

The Roaring Twenties were marked, on the international scene, by the problem of the economic reparations due by Germany to France and Great Britain, as well as by various irredentism claims. The US acted as mediators in this conflict, first with the Dawes Plan in 1924, then the Young Plan in 1929.