The idea of a fourth dimension has been a factor in the evolution of modern art, but use of concepts relating to higher dimensions has been little discussed by academics in the literary world.[1] From the late 1800s onwards, many writers began to make use of possibilities opened up by the exploration of such concepts as hypercubes and non-Euclidean geometry. While many writers took the fourth dimension to be one of time (as it is commonly considered today), others preferred to think of it in spatial terms, and some associated the new mathematics with wider changes in modern culture.

Theoretical physicist James Clerk Maxwell is best known for his work in formulating the equations of electromagnetism. He was also a prize-winning poet,[2] and in his last poem Paradoxical Ode; Maxwell muses on connections between science, religion and nature, touching upon higher-dimensions along the way:[3]

Since all the tools for my untying
In four-dimensioned space are lying,
Where playful fancy intersperses
Whole avenues of universes..
Excerpt from Maxwell's Paradoxical Ode of 1878[4]

In the Brothers Karamazov, Dostoevsky's last work completed in 1880, the fourth dimension is used to signify that which is ungraspable to someone with earthly (or three-dimensional) concerns.[5] In the book, Ivan Karamazov laments to his younger brother:

"..I have a Euclidean earthly mind, and how could I solve problems that are not of this world? And I advise you never to think about it either, my dear Alyosha, especially about God, whether He exists or not. All such questions are utterly inappropriate for a mind created with an idea of only three dimensions."[6]

In the 1884 satirical novella Flatland by Edwin Abbott Abbott, the two-dimensional protagonist (a square) is introduced to the concept of the third-dimension by his mentor (a sphere). After initially struggling with the idea, the square starts to speculate upon yet higher dimensions. After envisioning a tesseract, the square asks:

"..shall we stay our upward course? In that blessed region of Four Dimensions, shall we linger at the threshold of the Fifth, and not enter therein? Ah, no! Let us rather resolve that our ambition shall soar with our corporal ascent. Then, yielding to our intellectual onset, the gates of the Six Dimension shall fly open; after that a Seventh, and then an Eighth.."[7]

Oscar Wilde's The Canterville Ghost (A Hylo-Idealistic Romance) published in 1887 was Wilde's parody of a "haunted-house" story. The tale uses the higher spatial dimension as a handy plot device allowing a magical exit for the ghost:[8]

"There was evidently no time to be lost, so, hastily adopting the Fourth Dimension of Space as a means of escape, he vanished through the wainscoting, and the house became quite quiet."[9]

H.G. Wells famously employed the concept of a higher temporal dimension in his 1895 book The Time Machine. Wells had already covered the subject seven years previously in his tale of The Chronic Argonauts. In this 1888 short story, inventor Dr. Nebogipfel asks the Reverend Cook:

"Has it never glimmered upon your consciousness that nothing stood between men and a geometry of four dimensions - length, breadth, thickness, and duration - but the inertia of opinion? ..When we take up this new light of a fourth dimension and reexamine our physical science in its illumination.. ..we find ourselves no longer limited by hopeless restriction to a certain beat of time."[10]

In Wells’ 1895 short story The Remarkable Case of Davidson's Eyes, the main character sees visions of a ship – only to find out later that the ship in question was on the opposite side of the globe at the time. A doctor tries to explain how this might have happened through higher dimensions, though the narrator struggles with the concept.

"..his explanation invokes the Fourth Dimension, and a dissertation on theoretical kinds of space. To talk of there being "a kink in space" seems mere nonsense to me; it may be because I am no mathematician. When I said that nothing would alter the fact that the place is eight thousand miles away, he answered that two points might be a yard away on a sheet of paper, and yet be brought together by bending the paper round. The reader may grasp his argument, but I certainly do not."[11]

Joseph Conrad and Ford Madox Ford's 1901 work The Inheritors : An Extravagant Story uses the "fourth dimension" as a metaphor to explain a shift in society away from traditional values towards modern expediency and callous use of political power. The "inheritors" are a breed of materialists, who call themselves "Fourth Dimensionists", tasked with occupying the earth. The narrator tells how, "I heard the nature of the Fourth Dimension – heard that it was invisible to our eyes, but omnipresent.."[12]

In the first volume of In Search of Lost Time (or Remembrance of Things Past) published in 1913, Marcel Proust envisioned the extra dimension as a temporal one. The narrator describes a church at Combray being "..for me something entirely different from the rest of the town; an edifice occupying, so to speak, a four-dimensional space – the name of the fourth being time."[13]

Artist Max Weber's Cubist Poems, is a collection of prose first published in 1914.

Billions of things upon things
This for the eye, the eye of being,
At the edge of the Hudson,
Flowing timeless, endless,
On, on, on, on....
Excerpt from The Eye Moment, a Weber poem published in 1914[14]

Poet Ezra Pound finishes his 1937 Canto 49 (often known as "the Seven Lakes") with these lines:

The fourth; the dimension of stillness.
And the power over wild beasts.[15] 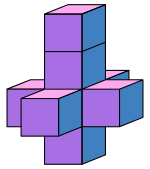 The architect in Robert A. Heinlein's "—And He Built a Crooked House—" constructs a home resembling this tesseract net.

Science Fiction author Robert A. Heinlein used ideas derived from multi-dimensional geometry in some of his stories. "—And He Built a Crooked House—" was first published in Astounding Science Fiction magazine in February 1941. In the story, a recently graduated architect constructs an eight-room home for his friend based on an "unfolded tesseract". An earthquake collapses or "folds" the structure, leading to all eight rooms being contained within just one. The stairs appear to form a closed loop, and there seems to be no way of leaving, as all the doors and even the windows lead directly into other rooms.[16] Heinlein's 1963 fantasy novel Glory Road (originally serialized in The Magazine of Fantasy & Science Fiction) features a device called a fold box which is bigger on the inside than the outside.[17] In his 1980 novel The Number of the Beast, a "continua device" formulated using "theories on n-dimensional non-euclidean geometry" gives the protagonists the ability to time-travel and to visit fictional universes.[18]

Published in 1962,[19] Madeleine L'Engle's award-winning[20] A Wrinkle in Time revolves around a girl called Meg whose scientist father disappears after working on a mysterious project. In a chapter entitled "The Tesseract", Mrs Whatsit and Mrs Who (both immortals) use the analogy of small insect making a long journey across a length of material in order to explain instantaneous travel across the universe: "Swiftly Mrs Who brought her hands, still holding the skirt, together. 'Now you see.. ..he would be there.. ..that is how we travel.'"[21] Meg declares herself to be a "moron" for not understanding the concept (known in the book as "tessering"). Luckily, her telepathic younger brother clarifies the matter, by telling Meg that the fourth dimension of time and the fifth of the tesseract combine, enabling Euclidean geometry-contravening short-cuts to be taken through space.[21]

In Kurt Vonnegut's 1969 work Slaughterhouse-Five, recurring character Kilgore Trout writes a book called Maniacs in the Fourth Dimension which relates how "three-dimensional Earthling doctors" were unable to cure people with mental diseases, "as the causes.. ..were all in the fourth dimension."[22] Trout also explains how "..vampires and werewolves and goblins and angels" reside in this alternative plane, alongside poet William Blake.[22]