News Corporation chairman Rupert Murdoch confirmed the launch at his keynote address at the 2007 McGraw-Hill Media Summit on February 8, 2007. Murdoch had publicly stated that if News Corporation's purchase of The Wall Street Journal went through and if it were legally possible, he would have rechristened the channel with a name that has "Journal" in it.[2] However, on July 11, 2007, News Corporation announced that the new channel would be called Fox Business Network (FBN).[3] This name Fox Business Network was chosen over Fox Business Channel due to the pre-existing (though seldom used) legal abbreviation of "FBC" for the then-News Corporation-owned broadcast network Fox Broadcasting Company.[4]

The channel launched on October 15, 2007.[5] The network is placed on channel 43 in the New York City market, which is home to the NYSE, NASDAQ and S&P 500 stock exchanges. It is paired with sister network Fox News Channel, which moved to channel 44 (CNBC is carried on channel 15 on Time Warner Cable's New York City area systems).[6] FBN received carriage on Cablevision channel 106, only available via subscription to its IO Digital Cable package. According to an article in Multichannel News, NBC Universal paid up to "several million dollars" in order to ensure that CNBC and Fox Business would be separated on the dial, and in order to retain CNBC's "premium" channel slot.[7] However, it is important to note that FBN is carried on Time Warner Cable only on its analog service in New York City; in other markets, the channel's carriage is limited to digital cable.[8] Verizon's FiOS TV also carries the network on its premier lineup (SD channel 117 and HD channel 617). Dish Network began carrying FBN on channel 206 on February 2, 2009. FBN also received carriage on DirecTV channel 359.

On May 12, 2008, Fox Business Network revamped its daytime lineup, which included the debut of two new programs, Countdown to the Closing Bell and Fox Business Bulls & Bears. On April 20, 2009, Money for Breakfast, The Opening Bell on Fox Business (both hosted by Alexis Glick), The Noon Show with Tom Sullivan and Cheryl Casone, Countdown to the Closing Bell, Fox Business Bulls & Bears, and Cavuto all moved to the network's new Studio G set. All six of those shows shared the same set in Studio G, which was unveiled on Money for Breakfast the same day.

On September 17, 2012, FBN switched to a letterboxed format on its standard definition feed; simultaneously, all programs began being shown on its HD feed in a full 16:9 picture format, resulting in the removal of the right-side content wing. The network also debuted new graphics on the same day.

On February 24, 2014, Opening Bell with Maria Bartiromo debuted on FBN in the 9 a.m. ET timeslot, replacing the final 20 minutes of Imus in the Morning (which itself was truncated from 200 minutes to 180 minutes) and moved Varney & Company (which also expanded to the full 2 hours) down to the 11 a.m. ET time slot.

On May 29, 2015, Imus in the Morning was cancelled after a 5-1/2 run, thus resulting in major changes to FBN's daytime programming lineup on June 1, 2015. Best of Imus in the Morning, which aired from 5-6 a.m. ET, was replaced with a new early-morning business program, FBN AM. Maria Bartiromo, whose Opening Bell program was also cancelled on May 29, debuted her own new morning program, Mornings with Maria, in the time slot previously occupied by the aforementioned Imus in the Morning (6-9 a.m. ET). Varney & Company was moved up to the 9:00 a.m. ET time slot and also, was expanded to 3 hours from 9:00 a.m. to noon ET. FBN AM and Mornings with Maria were among the four new programs that debuted on June 1, with Cavuto: Coast to Coast and Intelligence Report with Trish Regan being the others.

On November 10, 2015, Fox Business Network, along with The Wall Street Journal hosted its first Republican presidential primary debate, setting a ratings record for the network with 13.5 million viewers. The debate also delivered 1.4 million concurrent streams, making it the most livestreaming primary debate in history and beating out the 2015 Super Bowl by 100,000 streams.[9] Fox Business Network will host its second Republican primary debate on January 14, 2016 in Charleston, South Carolina with Neil Cavuto and Maria Bartiromo serving as the moderators. Both of these primetime debates also included earlier debates featuring presidential candidates who were not ranked as highly in the national polls as well as those based in Iowa or New Hampshire.[10]

The high definition simulcast of Fox Business Network is broadcast in the 720p resolution format. Programming shown on this feed was originally produced in high-definition, but was cropped to a 4:3 image and pushed to the left side of the screen, with the extra room used for additional content, such as statistics and charts, and a wider ticker with more room; the information sidebar was named "The Fox HD Wing" (competitor channel CNBC HD used the enhanced HD format until October 13, 2014, when it was discontinued altogether).

The sidebar graphic was dropped as a result of the network's switch to a 16:9 letterbox format on September 17, 2012, ending the enhanced HD format altogether. The enhanced ticker and headlines, which were previously seen in the old sidebar graphic, were moved to the lower-third of the screen. Both the SD and HD feeds now use the same exact 16:9 letterbox format, just like its other 21st Century Fox-owned sister networks.

Competition with other business and financial news channels 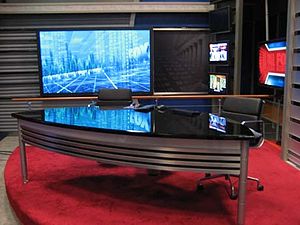 Before the network premiered, few specific facts were made public as to the type of programming approach Fox Business would be taking. However, some details emerged as to how it would differentiate itself from its main competitor, CNBC.

At a media summit hosted by BusinessWeek magazine, Rupert Murdoch was quoted as saying CNBC was too "negative towards business". They promised to make Fox Business more "business friendly".[11] In addition, it was expected that Fox Business would not be "poaching" a lot of CNBC's on-air talent in the immediate future, as most key on-air personalities had been locked into a long-term contract. However, that still left open the possibility of the network taking some of CNBC's other staff, including editors, producers and other reporters.[12] News Corporation, the former parent company of Fox Business and Fox News Channel (until all of Fox's film and most of its television properties were spun off into 21st Century Fox in June 2013), made a successful bid for Dow Jones, owner of the Wall Street Journal. However, CNBC stated on air that it had a contract with Dow Jones until 2012. One potential issue down the road is the fact that CNBC operates several news bureaus under the same roof as the Wall Street Journal. 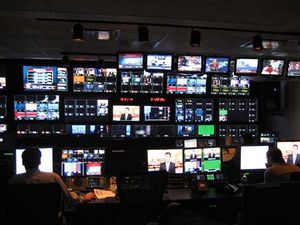 Dave Ramsey had a one-hour prime time show, similar in format to his syndicated radio show, until June 2010.[19] Tom Sullivan broadcast his Tom Sullivan Show on the radio, with plans to syndicate the show nationwide with the assistance of Fox News Radio. Adam Shapiro (formerly with Cleveland's WEWS-TV and New York City's WNBC) was added to the Fox Business Network to report from the Washington, D.C. bureau. On October 18, 2007, former CNBC anchor Liz Claman joined the Fox Business Network as co-anchor of the 2-3 p.m. portion of the dayside business news block with David Asman. Her first assignment for FBN was an interview with Warren Buffett.

In April 2008, Brian Sullivan (no relation to Tom) joined the Fox Business Network, coming over from Bloomberg Television. Sullivan, who reunited with his Bloomberg colleague Connell McShane, anchored the 10 a.m.-12 p.m. portion of the business news block with Dagen McDowell.

In September 2009, Don Imus and FBN reached an agreement to carry his show, Imus in the Morning, on Fox Business. The show began airing on October 5, 2009.[20] Fox had previously been in negotiations with Imus to bring his show to the network. In November 2007 (when Imus was just returning to radio, and Fox Business was just starting), negotiations fell through and Imus instead signed with rural-oriented cable network RFD-TV.

On December 23, 2009, Alexis Glick left FBN. Announcing that that day's episode of The Opening Bell would be her last, she said “I know this is not the norm, but I don’t believe in abrupt departures.”[21] The only reason given by Glick for her departure was that she was leaving to "embark on a new venture,"[22] but a number of sources have noted that Don Imus' new morning show had a significant effect upon Glick's screen time since he signed with the network.[23]

Maria Bartiromo, formerly of CNBC, joined the Fox Business Network as anchor in February 2014. She is reunited with Liz Claman, Melissa Francis and Charles Gasparino, all 3 of whom worked with Bartiromo during her 20-year tenure at CNBC. Trish Regan (another CNBC alum), who was previously at Bloomberg, joined FBN in March 2015.

These reporters are based in New York unless otherwise stated.

On January 4, 2008, the New York Times, and several other media outlets that day, reported that FBN had registered an average of 6,300 viewers, far below Nielsen's 35,000-viewer threshold. The number was so low that neither Nielsen nor FBN were allowed to confirm the number.[24] The Times and other media outlets noted the network is less than four months old and only in one-third as many households as is CNBC.

In July 2008, Nielsen estimated that FBN averaged 8,000 viewers per daytime hour and 20,000 per prime time hour, compared to 284,000 and 191,000 (respectively) for CNBC. Because FBN's viewership remained low, Nielsen had difficulty estimating viewership, and the estimates are not statistically significant. At the time, FBN was available in approximately 40 million homes to CNBC's over 90 million.[25]

Reports of ratings from the first episode of Imus in the Morning reported an average of 177,000 viewers (and a peak of 202,000 in the 7:00 a.m. hour) in the time slot, mostly over the age of 65; this was a more than tenfold increase compared to the network's previous morning show, Money for Breakfast. The program even beat CNBC's Squawk Box in the time slot.[29]

As of June 2012, Lou Dobbs Tonight was earning an average of 154,000 viewers on Fox Business Network, ahead of its direct competition (Kudlow & Company) on CNBC.[30]

Fox Business has been criticized like CNBC[31] for the number of infomercials it airs during the overnight hours and particularly on weekends.[32][33] During events regarding the financial crisis of 2007–08, however, FBN had forgone infomercials and aired overnight coverage from Australian sister network Sky News Business Channel and Sky News from the United Kingdom to provide coverage of the overseas reaction to the events.

The channel is broadcast to Australia overnight via the Sky News Business Channel.[34][35] Other countries possible in the future include United Kingdom, although the channel's reports are aired on 21st Century Fox's Sky News in the UK,[36] Canada[37] and Italy,[38] although negotiations are still on-going with cable and satellite providers. As of July 2011, the channel is carried on Sky Italia, its first European carriage deal.

On April 20, 2009, the Canadian Radio-television and Telecommunications Commission approved Fox Business Network for distribution in Canada;[39] however, it has yet to receive carriage on any cable and satellite providers within that country.

Fox Business has put together an industrial index made up of "the largest U.S. companies that make the products you know and use every day." [40] This index includes:

Anheuser-Busch and Merrill Lynch were included in the original index, but each was acquired by other companies in 2008. They were replaced by Wells Fargo and HP.[41] This index is not available to purchase in the form of an index fund or ETF. The fund received criticism from some financial bloggers for putting together an index with so many competing brands (such as FedEx and UPS; McDonalds and Yum! Brands; WalMart, Target and Costco; Apple, Dell and Microsoft; and Coca-Cola and PepsiCo).[42]