From Infogalactic: the planetary knowledge core
Jump to: navigation, search
For other uses of the word Foxhound, see Foxhound (disambiguation). 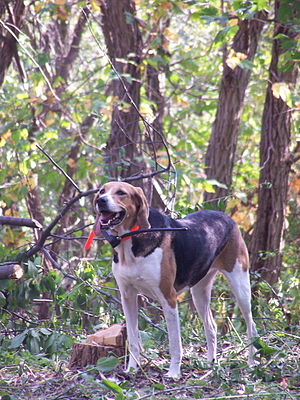 A foxhound is a type of large hunting hound bred for strong hunting instincts, great energy, and, like all scent hounds, a keen sense of smell.[citation needed] In fox hunting, the foxhound's namesake, packs of foxhounds track quarry, followed—usually on horseback—by the hunters, sometimes for several miles at a stretch; moreover, foxhounds also sometimes guard sheep and houses.

There are different breeds of foxhound, each often called simply Foxhound in their native countries:

In 2005, the American Kennel Club reported that the English and American Foxhounds were their least and fourth least registered breeds in North America with 22 and 44 registrations, respectively; the top registered breed, the Labrador Retriever, had 137,867 registrations during the same year.[2]