Foxwoods Resort Casino is a hotel casino in Mashantucket, Connecticut on the Mashantucket Pequot Indian Reservation. A complex of six casinos, the resort covers an area of 9,000,000 sq ft (840,000 m2). The casinos have more than 380 gaming tables for blackjack, craps, roulette, and poker and have more than 4,700 slot machines. There are several restaurants within the casinos, among them a Hard Rock Cafe. Foxwoods has 2,266 hotel rooms and a two-story arcade for children and teens. It is now the largest casino in the United States at approximately 340,000 sq ft (32,000 m2) of gaming space.

The economic recession that began in 2007 took a heavy toll of receipts, and by 2012 both Foxwoods and its nearby rival the Mohegan Sun were deeply in debt.[1] The New York Times said "Foxwoods is fighting for its life" with debts of $2.3 billion.[2]

Foxwoods was founded in 1986 as a bingo hall.[3] The casino was financed by Lim Goh Tong, a Chinese Malaysian who founded the only legal casino in Malaysia. Lim died in October 2007.[4][5]

In 1992, the Mashantucket Pequot Tribe, the casino's owner, added table games, followed by additional slot machines in 1993. G. Michael Brown became the chairman of the casino in 1993. The casino agreed to pay 25 percent of their slot revenue to the state of Connecticut, a sum that amounts to almost $200 million per year as of 2007[update].[6] In the fiscal year ending June 2008, Foxwoods' 6,300 slots handled more than $9.1 billion.[7]

A poker room and a high-limit 30-table game area were added in 1995. Foxwoods is not a smoke-free casino, but due to recent complaints from patrons and employees has designated many common areas such as hallways, walkways, hotel lobbies, retail stores and most restaurants as non smoking areas and has assigned designated areas for smokers. The poker room is non smoking and there are also separate table gaming and slot areas designated as non smoking. The casino was completed in 1996. In 1997, the deluxe Grand Pequot Tower was opened for business.

The full build-out of the resort was an effort by several design and construction entities. The majority of the work from 1992 to 2001 was completed by Construction Managers CR Klewin aka Klewin Building Co. and the Architect of Record was JCJ Architecture (formerly Jeter, Cook & Jepson) of Hartford, CT. Planning & concept designs were by New England Design Inc. and Nick606 Inc. Later phases were completed by Shawmut Design & Construction, Perini Building Co., AZ Corporation, and others.

Games available at Foxwoods include:

The WPT World Poker Room is located one floor below the Rainmaker Casino. This room runs poker games of varying stakes, including limit and no-limit Texas hold 'em, limit and pot-limit Omaha hold 'em (including hi/lo), and seven-card stud (high only and hi/lo).

The poker room underwent an expansion and relocation in March 2006, increasing the number of tables from 76 to 114, making it the largest poker room outside of California, and the third-largest poker room in the world, after the Commerce Casino and the Bicycle Casino.[8][9] 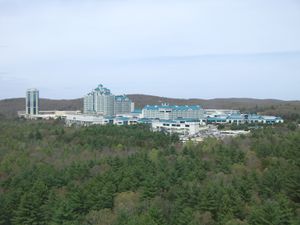 Construction started in November 2005 on a $700 million expansion at Foxwoods. On April 25, 2006, Foxwoods announced that they would lease the MGM Grand brand name for the new building, and that MGM Mirage would be a partner in the expansion project. The expansion, entitled The MGM Grand at Foxwoods, opened on May 17, 2008. It is a separate building from the main Foxwoods resort, but is connected by a moving walkway. In late 2013, MGM split up with Foxwoods. The new name for the building is The Fox Tower. Amenities at the MGM Grand at Foxwoods included:

Beginning with an employee-led website to gain support and sharing ideas of how to react to the changes employees had been going through, a small base of employees approached several union organizations to determine if unionizing would be the best fit for the dealers of Foxwoods Resort Casino. After deciding on the UAW in June 2007, the UAW helped start collecting signatures from dealers in support of a union, the United Auto Workers announced in September 2007 that it had collected the requisite number of signatures needed to hold an election to determine whether table games and poker dealers desired union representation or not. The Tribe challenged the jurisdiction of the National Labor Relations Board over on-reservation Native American enterprises. Following hearings, the National Labor Relations Board ruled in favor of the union and ordered a union election to be conducted. On November 24, 2007, employees voted to unionize with 60 percent in favor and 40 percent against.[11] The Foxwood dealers cast 1,289 ballots for the union, 852 against representation, with challenges to 36 additional ballots. Approximately 2,700 dealers and dual-rate dealers were eligible to vote in the election.

After the workers won their right to unionize, Foxwoods Casino appealed the election results, reasserting its jurisdictional challenge and claiming that the National Labor Relations Board made mistakes in conducting the vote, that the NLRB only printed the ballot in English and only provided notices explaining the election in only one form of the Chinese language, disenfranchised workers, and that interactions by union officials and some voters were unlawful.[12] An NLRB Administrative Law Judge ruled that the union and the board provided ample explanation of the election in a variety of languages. Foxwoods has appealed the decision.

The Foxwoods dealers union has also asked the state of Connecticut to improve the conditions of their workplace. Workers and union organizers pushed to have legislation that would ban smoking on the casino floors of Foxwoods and Mohegan Sun. The Mashantucket tribe has opposed a complete ban on smoking, however in May 2009, Connecticut Governor M. Jodi Rell signed an agreement with Foxwoods Casino to voluntarily limit smoking areas in the casino.[13]

On January 26, 2010 dealers at Foxwoods reached a labor contract with the Indian tribe that owns the casino making them the largest group of union-represented dealers at any U.S. casino.[14] On August 7, 2013 a new contract was announced giving dealers retroactive and future raises, set stricter limits on second-hand smoke, and gave dealers the right to decide how tips are distributed.[15]