From Infogalactic: the planetary knowledge core
Jump to: navigation, search
This article is about fractures in rocks. For the terminology describing the shape and texture of breakage surfaces in single minerals, see Fracture (mineralogy). 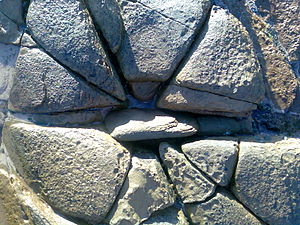 A fracture is any separation in a geologic formation, such as a joint or a fault that divides the rock into two or more pieces. A fracture will sometimes form a deep fissure or crevice in the rock. Fractures are commonly caused by stress exceeding the rock strength, causing the rock to lose cohesion along its weakest plane.[1] Fractures can provide permeability for fluid movement, such as water or hydrocarbons. Highly fractured rocks can make good aquifers or hydrocarbon reservoirs, since they may possess both significant permeability and fracture porosity.

After those two initial deformations, several other types of secondary brittle deformation can be observed, such as frictional sliding or cataclastic flow on reactivated joints or faults.

Most often, fracture profiles will look like either a blade, ellipsoid, or circle.

File:Plumose fracture.jpg
The concentric circles in this sandstone are "plumose" (plume-like) structures that can form during the formation and propagation of a fracture

First, there are three modes of fractures that occur (regardless of mechanism)

For more information on this, see fracture mechanics.

This deformation creates propagation of fractures into previously unfractured rock, when the rock is subjected to tensile stress. In the case of a homogenous stress field, the crack will propagate in the direction perpendicular to the least principal stress.

Engineers studying elasticity found that the stress due to a load distant from the region of interest is concentrated around material flaws. A. W. Griffith took this example and applied the concept of stress concentration to the ends of fractures. Griffith asserted that all material have microcracks or flaws where the stress concentration naturally occurs, and that these were the flaws where, under increasing stress, fractures propagate.[2] As a result, these pre-existing flaws were named Griffith cracks, and allow the conceptual assumption that rocks are relatively weak.

From this assumption, tensile fracture development may be examined.

The first form is in axial stretching'. In this case, remote tensile stress is applied, allowing microcracks to open slightly throughout the tensile region. As these cracks open up, the stresses at the crack tips intensify, eventually exceeding the rock strength and allowing the fracture to propagate. This can occur at times of rapid overburden erosion. Folding also can provide tension, such as along the top of an anticlinal fold axis, where the tensile forces associated with the stretching of the upper half of the layers during folding can induce tensile fractures parallel to the fold axis.

Tensile fracturing may also be induced by applied compressive loads along an axis, which results in longitudinal splitting. In this situation, tiny tensile fractures form parallel to the loading axis, however the load forces any other microfractures closed. To picture this, imagine an envelope, with loading from the top. A load is applied on the top edge, the sides of the envelope open outward, even though nothing was pulling on them. Rapid deposition and compaction can sometimes induce these fractures.

For Griffith Fractures, there are several key equations.

the fracture is propagated, where KI is the stress concentration at the fracture tip, Δσ is the difference in stress applied along the fracture area and the in-situ stress, and a is the half length of the fracture.

where W(x) is the fracture width at x distance from the center, ν is the Poisson's ratio, E is the Young's Modulus of Elasticity, Δσ is the difference in stress applied along the fracture area and the in-situ stress, and a is the half length of the fracture.

Another tensile fracture mechanism is hydraulic fracturing. In a natural environment, this occurs when a combination of rapid sediment compaction and thermal fluid expansion causes the pore fluid pressure to exceed the pressure of the least principal normal stress. When this occurs, a tensile fracture opens perpendicular to the plane of least stress.[3]

Tensile fractures are almost always referred to as joints, which are fractures where no appreciable slip or shear is observed.

Describing joints can be difficult, especially without visuals. The following are descriptions of typical natural fracture joint geometries that might be encountered in field studies:

Faults are another form of fracture in a geologic environment. In any type of faulting, the active fracture experiences shear failure, as the faces of the fracture slip relative to each other. As a result, these fractures seem like large scale representations of Mode II and III fractures, however that is not necessarily the case. On such a large scale, once the shear failure occurs, the fracture begins to curve its propagation towards the same direction as the tensile fractures. In other words, the fault typically attempts to orient itself perpendicular to the plane of least principal stress. This results in an out-of-plane shear relative to the initial reference plane. Therefore, these cannot necessarily be qualified as Mode II or III fractures.[2]

An additional, important characteristic of shear-mode fractures is the process by which they spawn wing cracks, which are tensile cracks that form at the propagation tip of the shear fractures. As the faces slide in opposite directions, tension is created at the tip, and a mode I fracture is created in the direction of the σh-max, which is the direction of maximum principal stress.

Shear-failure criteria is an expression that attempts to describe the stress at which a shear rupture creates a crack and separation. This criterion is based largely off of the work of Charles Coulomb, who suggested that as long as all stresses are compressive, as is the case in shear fracture, the shear stress is related to the normal stress by:

This relationship serves to provide the coulomb failure envelope within the Mohr-Coulomb Theory.

One important idea when evaluating the friction behavior within a fracture is the impact of asperities, which are the irregularities that stick out from the rough surfaces of fractures. Since both faces have bumps and pieces that stick out, not all of the fracture face is actually touching the other face. The cumulative impact of asperities is a reduction of the real area of contact', which is important when establishing frictional forces.[2]

In geotechnical engineering a fracture forms a discontinuity that may have a large influence on the mechanical behavior (strength, deformation, etc.) of soil and rock masses in, for example, tunnel, foundation, or slope construction.

Fractures also play a significant role in minerals exploitation. One aspect of the upstream energy sector is the production from naturally fractured reservoirs. There are a good number of naturally fractured reservoirs in the United States, and over the past century, they have provided a substantial boost to the nation's net hydrocarbon production.

The key concept is while low porosity, brittle rocks may have very little natural storage or flow capability, the rock is subjected to stresses that generate fractures, and these fractures can actually store a very large volume of hydrocarbons, capable of being recovered at very high rates. One of the most famous examples of a prolific naturally fractured reservoir was the Austin Chalk formation in South Texas. The chalk had very little porosity, and even less permeability. However, tectonic stresses over time created one of the most extensive fractured reservoirs in the world. By predicting the location and connectivity of fracture networks, geologists were able to plan horizontal wellbores to intersect as many fracture networks as possible. Many people credit this field for the birth of true horizontal drilling in a developmental context. Another example in South Texas is the Georgetown and Buda limestone formations.

Furthermore, the recent uprise in prevalence of unconventional reservoirs is actually, in part, a product of natural fractures. In this case, these microfractures are analogous to Griffith Cracks, however they can often be sufficient to supply the necessary productivity, especially after completions, to make what used to be marginally economic zones commercially productive with repeatable success.

However, while natural fractures can often be beneficial, they can also act as potential hazards while drilling wells. Natural fractures can have very high permeability, and as a result, any differences in hydrostatic balance down the well can result in well control issues. If a higher pressured natural fracture system is encountered, the rapid rate at which formation fluid can flow into the wellbore can cause the situation to rapidly escalate into a blowout, either at surface or in a higher subsurface formation. Conversely, if a lower pressured fracture network is encountered, fluid from the wellbore can flow very rapidly into the fractures, causing a loss of hydrostatic pressure and creating the potential for a blowout from a formation further up the hole.