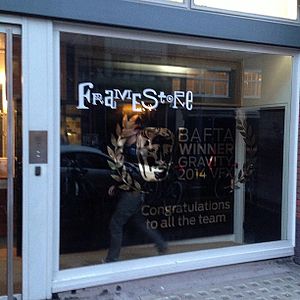 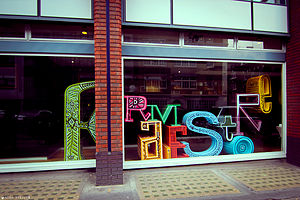 Framestore is a British visual effects company based near Oxford Street in London. Formed in 1986, it acquired (and subsequently merged) the Computer Film Company in 1997. The company works across several different areas of the media: feature films, commercials, music videos, feature animation and digital.

The company's registered office is at 9 Noel Street, London. In 2004, the company set up an office in New York City's SoHo district to serve the American advertising market, and has since set up offices in Los Angeles and Montreal.

Framestore acquired the Computer Film Company (CFC) in 1997 which was one of the first digital film special effects companies, developing technology for digital film scanning, compositing, and output. It was founded in London in 1984 by Mike Boudry, Wolfgang Lempp (now CTO at Filmlight) and Neil Harris (Lightworks). CFC's first film was The Fruit Machine, in 1988, which utilized early morphing techniques.[1] In 2008, Framestore dropped the CFC from its name, becoming simply Framestore.

Framestore and CFC's achievements in film and television have been recognised throughout the industry, with CFC being awarded two Scientific and Technical Academy Awards, and 14 Primetime Emmys. In 2008, Framestore won their first Oscar for Best Visual Effects for the film The Golden Compass; they also won the BAFTA Award for that film the same year. Framestore was also nominated for Oscars in 2007 (Superman Returns), in 2009 (The Dark Knight) and again in 2010 (Harry Potter and the Deathly Hallows – Part 1). Tim Webber was the VFX supervisor on Gravity (2013), and the techniques involved in the film realized by Webber and the Framestore team took three years to complete.[2] The team won the best visual effects awards BAFTA Award for Best Special Visual Effects at the 67th British Academy Film Awards, and the Academy Award for Best Visual Effects award at the 86th Academy Awards.[3] In advertising the team has also won all the major awards including Cannes Lions, British Television Advertising Awards, Clios, D&AD and many more.

Other achievements for the companies include the delivery of its first feature animation project The Tale of Despereaux with Universal; the completion of Europe's first digital intermediate for the film Chicken Run in 2000; contribution of scenes for the 2009 film Avatar, and the completion as a production project of four British feature films which opened in theatres between during 2009 and 2010.

Framerstore has often collaborates with companies and advertising agencies to create trade characters - Animals that are used to advertise a good or service and become associated with the brand. In 2014, Framestore worked with CARFAX to further develop their trade character CAR FOX. The newly imagined character now represents the company and appears in their national television advertising and all their marketing materials. [1]