François Henri de Montmorency-Bouteville, Duke of Piney-Luxembourg, called Luxembourg, (8 January 1628 – 4 January 1695) was a French general, marshal of France, famous as the comrade and successor of the great Condé.

François Henri de Montmorency was born at Paris. His father, the François de Montmorency-Bouteville, had been executed six months before his birth for participating in a duel against the Marquis de Beuvron. His aunt, Charlotte Marguerite de Montmorency, Princess of Condé, took charge of him and educated him with her son, the Duke of Enghien. The young Montmorency (or Bouteville as he was then called) attached himself to his cousin, and shared his successes and reverses throughout the troubles of the Fronde. He returned to France in 1659 and was pardoned, and Condé, then much attached to the Duchess of Châtillon, Montmorency's sister, contrived the marriage of his adherent and cousin to the greatest heiress in France, Madeleine de Luxembourg, Princess of Tingry and heiress of the Luxembourg dukedom (1661), after which he was created Duke of Luxembourg and peer of France.

War of Devolution and the Franco-Dutch War

At the opening of the War of Devolution (1667–68), Condé, and consequently Luxembourg, had no command, but during the second campaign he served as Condé's lieutenant general in the conquest of Franche-Comté. During the four years of peace which followed, Luxembourg cultivated the favour of Louvois, and in 1672 held a high command against the Dutch during the Franco-Dutch War. He defeated a counterattack by the forces of Prince William III of Orange at Woerden but was blocked by the Dutch Water Line. On 27 December the inundations were frozen over and he began to cross over the ice, but a sudden thaw cut his force in half. Retreating, de Luxembourg found the fortress town of Bodegraven abandoned by its garrison and ordered the entire civilian population to be burned alive with their houses. The Dutch anti-French propaganda quickly exploited this massacre and when de Luxembourg bragged to Louis XIV that he had roasted any Dutchman he could find in the town, he was surprised to find that some at court considered such cruelties unnecessary. In 1673 he made his famous retreat from Utrecht to Maastricht with only 20,000 men in face of 70,000, an exploit which placed him in the first rank of generals.

In 1674 he was made captain of the Garde du Corps, and in 1675 Marshal of France. In 1676 he was placed at the head of the army of the Rhine, but failed to keep the Duke of Lorraine out of Philipsburg. In 1677 he stormed Valenciennes; and in 1678 he defeated the Prince of Orange, who attacked him at St Denis after the signature of the Peace of Nijmegen. His reputation was now high and it is reputed that he quarrelled with Louvois, who managed to involve him in the "affair of the poisons" and get him sent to the Bastille. Rousset in his Histoire de Louvois has shown that this quarrel is probably apocryphal. Luxembourg doubtlessly spent some months of 1680 in the Bastille, but on his release took up his post at court as capitaine des gardes. 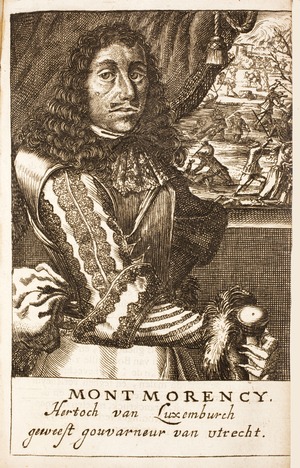 By 1690, during the War of the Grand Alliance, Luxembourg was entrusted with the command of King Louis' army in the Spanish Netherlands, superseding Louis de Crevant, Duke of Humières. On 1 July 1690 he won a great victory over William's allied commander, the Prince of Waldeck, at Fleurus. In the following year he was again victorious at Leuze on 18 September 1691.

In the next campaign he covered the king's 1692 Siege of Namur, and defeated William at Steenkerque in 1692; and on 29 July 1693 he won his greatest victory over his old adversary at Neerwinden, after which he was called le tapissier de Nôtre Dame from the number of captured colours that he sent to the cathedral. He was received with enthusiasm at Paris by all but the king, who looked coldly on a relative and adherent of the Condés. St-Simon describes in the first volume of his Memoirs how, instead of ranking as eighteenth peer of France according to his patent of 1661, he claimed through his wife to be duc de Piney of an old creation of 1571, which would place him second on the roll. The affair is described with St-Simon's usual interest in the peerage, and was chiefly checked through his assiduity.

In the campaign of 1694, Luxembourg did little in Flanders, except that he conducted a famous march from Vignamont to Tournai in face of the enemy.

On his return to Versailles for the winter he fell ill, and died. In his last moments he was attended by the famous Jesuit priest Bourdaloue, who said on his death, "I have not lived his life, but I would wish to die his death." Luxembourg's morals were bad even in those times, but as a general he was Condé's grandest pupil. Though slothful like Condé in the management of a campaign, at the moment of battle he seemed seized with happy inspirations, against which no ardour of William's and no steadiness of Dutch or English soldiers could stand. His death and Catinat's disgrace close the second period of the military history of the reign of Louis XIV, and Catinat and Luxembourg, though inferior to Condé and Turenne, were far superior to Tallard and Villeroi. He was distinguished for a pungent wit. One of his retorts referred to his deformity. "I never can beat that cursed humpback", William was reputed to have said of him. "How does he know I have a hump?" retorted Luxembourg, "he has never seen my back." He left four sons, the youngest of whom was a marshal of France as Marechal de Montmorency.