François Louis de Bourbon (30 April 1664 – 9 February 1709) was Prince de Conti, succeeding his brother Louis Armand in 1685. Until this date he used the title of Prince of La Roche-sur-Yon. He was son of Armand de Bourbon and Anne Marie Martinozzi, herself a niece of Cardinal Mazarin. He is the most famous member of the Conti family, a cadet branch of the Princes of Condé. As a member of the reigning House of Bourbon, he was a prince du sang.

Born at the Hôtel de Conti in Paris, he was the last of his parents' children. He had one older brother Louis Armand (1661–1685) who married Marie Anne de Bourbon, the illegitimate daughter of Louis XIV and his mistress, Louise de La Vallière.

In 1683 he assisted the Imperialists in Hungary, and while there he wrote some letters in which he referred to Louis XIV as le roi du théâtre; because of this and because of an early engagement at the side of the Turks in 1685, on his return to France he was temporarily banished to Chantilly.

Conti was the protégé of his uncle the "Great Condé" whose granddaughter, Marie Thérèse de Bourbon (1666–1732), he married at the Palace of Versailles on 22 January 1688, before the assembled court. Marie Thérèse was aged 22. Together, they had seven children.

The bride was passionately in love with her husband, but his attentions focused elsewhere. It was well known at court that he was in love with his wife's sister-in-law, Louise-Françoise de Bourbon, wife of Louis III, Prince of Condé, who was the eldest legitimated daughter of Louis XIV and Madame de Montespan.[citation needed] Marie Anne de Bourbon, the daughter of Louise-Françoise de Bourbon, was thought to have been the fruit of this affair.[citation needed] It was also noted, however, that he had homosexual tendencies[1] and did not pay his wife much attention. He lived as a libertine, engaging in numerous love affairs with members of both sexes. His scandalous philandering and debaucheries caused tension and distance within the family and earned him the nickname of le Grand Conti.[citation needed]

He served in the French army, but he never managed to achieve a rank higher than lieutenant-general. In 1689 he accompanied his intimate friend the Marshal Luxembourg to the Netherlands, and shared in the French victories at Fleurus, Steinkirk and Neerwinden. On the death of his cousin, Jean Louis Charles, Duke of Longueville (1646–1694) and in accordance to his will, Conti claimed the principality of Neuchâtel against Marie d'Orleans-Longueville, Duchess de Nemours, (1625–1707), a sister of the duke.

He failed to obtain military assistance from the Swiss, and by the king's command yielded the disputed territory to Marie, although the courts of law had decided in his favour. In 1697 Louis XIV offered him the Polish crown, and by means of bribes the Abbé de Polignac secured his election. 27 June 1697 he was formally proclaimed as the King of Poland by Cardinal Radziejowski.

Conti started rather unwillingly for his new kingdom, probably, as the Duke of Saint-Simon remarks, owing to his affection for Louise-Françoise de Bourbon. He departed on Railleuse, under Captain Jean Bart, on 6 September 1697.[2]

When he reached Danzig, he found his rival Augustus II, Elector of Saxony, already in possession of the Polish crown. Conti returned to France, where he was graciously received by Louis, although Saint-Simon says the king was vexed to see him again.[citation needed] But the misfortunes of the French armies during the earlier years of the War of the Spanish Succession compelled Louis to appoint Conti, whose military renown stood very high, to command the troops in Italy.

He fell ill before he could take the field, and died on the 9 February 1709, his death calling forth exceptional signs of mourning from all classes. He died from a combination of gout and syphilis. He was buried alongside his mother at his property in L'Isle-Adam, Val-d'Oise, near Paris. 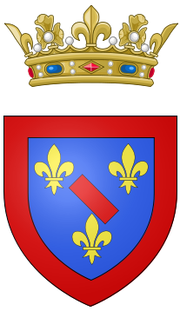