Frances Moore Lappé (born February 10, 1944) is the author of 18 books including the three-million copy Diet for a Small Planet. She is the co-founder of three national organizations that explore the roots of hunger, poverty and environmental crises, as well as solutions now emerging worldwide through what she calls Living Democracy. Her most recent books include EcoMind: Changing the Way We Think to Create the World We Want. and World Hunger: 10 Myths

Lappé was born in 1944 in Pendleton, Oregon, to John and Ina Moore and grew up in Fort Worth, Texas. After graduating from Earlham College in 1966, she married toxicologist and environmentalist Dr. Marc Lappé in 1967. They had two children, Anthony and Anna Lappé. They divorced in 1977. She briefly attended University of California at Berkeley for graduate studies in social work.

Throughout her works Lappé has argued that world hunger is caused not by the lack of food but rather by the inability of hungry people to gain access to the abundance of food that exists in the world and/or food-producing resources because they are simply too poor. She has posited that our current "thin democracy" creates a mal-distribution of power and resources that inevitably creates waste and an artificial scarcity of the essentials for sustainable living.

Lappé makes the argument that what she calls "living democracy," i.e. not only what we do in the voting booth but through our daily choices of what we buy and how we live, provides a mental and behavioral framework of goods and goodness that is aligned with our basic human nature. She believes that only by "living democracy" can we effectively solve today's social and environmental crises.

Lappé began her writing career early in life. She first gained prominence in the early 1970s with the publication of her book Diet for a Small Planet, which has sold several million copies. In 1975, with Joseph Collins she launched the California-based Institute for Food and Development Policy (Food First) to educate Americans about the causes of world hunger. In 1990, Lappé co-founded the Center for Living Democracy, a 10-year initiative to accelerate the spread of democratic innovations in which regular citizens contribute to problem solving. She served as founding editor of the Center’s American News Service (1995–2000), which placed stories of citizen problem-solving in nearly half the nation’s largest newspapers.

Frances Moore Lappé’s works have been translated into 15 languages, the most recent of which is a Chinese publication of Hope’s Edge.[1]

In 2002, Lappé and her daughter Anna established the Small Planet Institute based in Cambridge, Massachusetts a collaborative network for research and popular education to bring democracy to life. With her daughter, she is also co-founder of the Small Planet Fund, channeling resources to democratic social movements worldwide.

Small Planet Institute’s website, www.smallplanet.org, was revamped in November 2010. It features information on Frances and Anna, including book descriptions and news articles; resources on food, hunger and the environment; and resources on power and democratic life.

Democracy's Edge: Choosing to Save our Country by Bringing Democracy to Life, was released in 2006. This book completed a trilogy which began in 2002 with the 30th anniversary sequel to Diet for a Small Planet, titled Hope's Edge: The Next Diet for a Small Planet, co-written with her daughter, Anna Lappé. Then in 2004 she published with Jeffrey Perkins You Have the Power: Choosing Courage in a Culture of Fear. Among Lappé's other books are World Hunger: Twelve Myths and Rediscovering America's Values.

EcoMind: Changing the Way We Think to Create the World we Want, was released in Fall 2011.[2]

In 2006 she was chosen as a founding councilor of the Hamburg-based World Future Council. She is also a member of the International Commission on the Future of Food and Agriculture and the National Advisory Board of the Union of Concerned Scientists. She serves as an advisor to the Calgary Centre for Global Community and on the board of David Korten’s People-Centered Development Forum. In 2009 she joined the advisory board of Corporate Accountability International's Value the Meal campaign.[3] She is a Contributing Editor to YES! Magazine. Lappé's articles and opinion pieces have appeared in publications as diverse as The New York Times, O Magazine, and Christian Century. Her television and radio appearances have included a PBS special with Bill Moyers, the Today Show, CBS Radio, and National Public Radio.

Lappé has received 17 honorary doctorates from distinguished institutions, including the University of Michigan, Kenyon College, Allegheny College, Lewis and Clark College and Grinnell College. She also held various teaching and scholarly positions:
-From 1984-1985, Lappé was a visiting scholar at the Institute for the Study of Social Change, at the University of California, Berkeley.
- From 2000-2001, Lappé was a visiting scholar at the Massachusetts Institute of Technology, Cambridge, Massachusetts.
- In 2003, Lappé taught with Dr. Vandana Shiva in Dehra Dun, India, about the roots of world hunger, sponsored by the Navdanya researching and agricultural demonstration center.
- In 2004, Lappé taught a course on Living Democracy at Schumacher College in England.
- In 2006 and 2008, Lappé was a visiting professor at Suffolk University, Boston.[4] - In 2012, she was the Guest Speaker at Goddard College

In 1987 in Sweden, Lappé became the fourth American to receive the Right Livelihood Award. In 2003, she received the Rachel Carson Award from the National Nutritional Foods Association. She was selected as one of twelve living "women whose words have changed the world" by the Women's National Book Association. 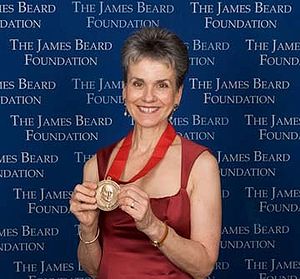 In 2008, she was honored by the James Beard Foundation as the Humanitarian of the Year.In the same year, Gourmet Magazine named Lappé among 25 people (including Thomas Jefferson, Upton Sinclair, and Julia Child), whose work has changed the way America eats. Diet for a Small Planet was selected as one of 75 Books by Women Whose Words Have Changed the World by members of the Women’s National Book Association in observance of its 75th anniversary.

Historian Howard Zinn wrote: “A small number of people in every generation are forerunners, in thought, action, spirit, who swerve past the barriers of greed and power to hold a torch high for the rest of us. Lappé is one of those.” The Washington Post says: “Some of the twentieth century’s most vibrant activist thinkers have been American women – Margaret Mead, Jeannette Rankin, Barbara Ward, Dorothy Day – who took it upon themselves to pump life into basic truths. Frances Moore Lappé is among them."

Lappé's son, Anthony, is a New York City-based producer and is the director of Invisible Hand Media. Her daughter, Anna now lives in Berkeley California.