Saint Frances Xavier Cabrini, M.S.C. (Italian: Francesca Saverio Cabrini; July 15, 1850 – December 22, 1917), also called Mother Cabrini, was an Italian- American religious sister, who founded the Missionary Sisters of the Sacred Heart, a Catholic religious institute that was a major support to the Italian immigrants to the United States. She was the first naturalized citizen of the United States to be canonized by the Roman Catholic Church, on July 7, 1946.[1]

Cabrini was born July 15, 1850, in Sant'Angelo Lodigiano, in the Lombard Province of Lodi, then part of the Austrian Empire, the youngest of the thirteen children of Agostino Cabrini and Stella Oldini, who were wealthy cherry tree farmers. Sadly, only four of the thirteen survived beyond adolescence.[2] Small and weak as a child, born two months premature, she remained in delicate health throughout her life. When she went to visit to her uncle, Don Luigi Oldini of Livagra, a priest who lived beside a swift canal, she made little boats of paper, dropped violets in them, called the flowers missionaries, and launched them to sail off to India and China.[3]

At thirteen Francesca attended a school run by the Daughters of the Sacred Heart. Five years later she graduated cum laude, with a teaching certificate.[3] After the deaths of her parents in 1870, she applied for admission to the religious congregation of the Daughters of the Sacred Heart at Arluno. These sisters were her former teachers but reluctantly, they told her she was too frail for their life.[4] She became the headmistress of the House of Providence orphanage in Codogno, where she taught, and drew a small community of women to live a religious way of life. Cabrini took religious vows in 1877 and added Xavier to her name to honor the Jesuit saint, Francis Xavier, the patron saint of missionary service.[5]

Missionary Sisters of the Sacred Heart of Jesus

In November 1880, she and six other women who had taken religious vows with her founded the Missionary Sisters of the Sacred Heart of Jesus (M.S.C.).[6] Cabrini composed the Rule and Constitutions of the religious institute, and she continued as its superior general until her death. The sisters took in orphans and foundlings, opened a day school to help pay expenses, started classes in needlework and sold their fine embroidery to earn a little more money.[3] The institute established seven homes and a free school and nursery in its first five years. Its good works brought Mother Cabrini to the attention of (the now Blessed) Giovanni Scalabrini, Bishop of Piacenza, and of Pope Leo XIII.

In September 1877, Cabrini went to seek approval of the pope to establish missions in China. Instead, he suggested to her that she go to the United States to help the Italian immigrants who were flooding to that nation in that era, mostly in great poverty. "Not to the East, but to the West" was his advice.[6]

Cabrini left for the United States, arriving in New York City on March 31, 1889, along with six other sisters. She encountered disappointment and difficulties at every step.[6] Archbishop Michael Corrigan, who was not immediately supportive, found them housing at the convent of the Sisters of Charity, where they were allowed to stay as long as necessary. She obtained the permission of the archbishop to found an orphanage, which is located in West Park, New York today and is known as Saint Cabrini Home.

Cabrini organized catechism and education classes for the Italian immigrants and provided for the needs of the many orphans. She established schools and orphanages despite tremendous odds. She was as resourceful as she was prayerful, finding people who would donate what she needed in money, time, labor, and support.[7] In New York City, she founded Columbus Hospital and Italian Hospital. In the 1980s, they were merged into Cabrini Medical Center.[4] The facility closed in 2008.

In Chicago, the sisters opened Columbus Extension Hospital (later renamed Saint Cabrini Hospital) in the heart of the city’s Italian neighborhood on the Near West Side. Both hospitals eventually closed near the end of the 20th century. Their foundress’ name lives on in Chicago's Cabrini Street.

She founded 67 institutions: in New York; Chicago; Des Plaines, Illinois; Seattle; New Orleans; Denver; Golden, Colorado; Los Angeles; Philadelphia;[5] and in countries throughout South America and Europe. Long after her death, the Missionary Sisters would achieve Mother Cabrini's goal of being missionaries to China. In only a short time, after much social and religious upheaval there, the Sisters left China and, subsequently, a Siberian placement.

Cabrini was naturalized as a United States citizen in 1909.[5] 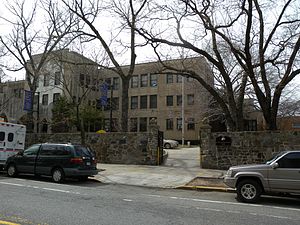 Mother Cabrini died of complications from dysentery at age 67 in Columbus Hospital in Chicago, Illinois, on December 22, 1917,[7] while preparing Christmas candy for the local children. By that time, she had founded 67 missionary institutions to serve the sick and poor and train additional sisters to carry on the work.

Her body was originally interred at Saint Cabrini Home, an orphanage she founded in West Park, Ulster County, New York.

In 1931, her body was exhumed as part of the canonization process. At that time, her head was removed and is preserved in the chapel of the congregation's international motherhouse in Rome. An arm is at the national shrine in Chicago, while most of the rest of her body is at the shrine in New York.

Cabrini was beatified on November 13, 1938, by Pope Pius XI, and canonized on July 7, 1946,[7] by Pope Pius XII. Her beatification miracle involved the restoration of sight to a child who had been blinded by excess silver nitrate in the child's eyes. Her canonization miracle involved the healing of a terminally ill member of her congregation. When she was canonized, 120,000 people from all over the area filled Soldier Field for a Mass of thanksgiving.[8]

St. Frances Xavier Cabrini is the patron saint of immigrants,[10] and of the religious institute, the Servants of the Lord and the Virgin of Matará, (Servidoras).[11]

Due to the overwhelming increase of pilgrims to her room at Chicago’s Columbus Hospital, the then-Archbishop of Chicago, Cardinal Samuel Stritch, consecrated a National Shrine built in her honor within the hospital complex. The National Shrine of Saint Frances Xavier Cabrini was dedicated in 1955.[12] The Shrine was at the heart of Columbus Hospital, formerly located in Chicago’s Lincoln Park. It was a popular destination for the faithful seeking personal healing and spiritual comfort. In 2002, the hospital closed and soon after was torn down, but the shrine and Mother Cabrini’s room were conserved, though closed to the public. It was reopened on October 1, 2012, following a ceremony the previous day.

It is located in the Lincoln Park area of Chicago at the former Columbus Hospital. It was solemnly blessed and dedicated in an Inaugural Liturgy that was celebrated by Cardinal Francis George, O.M.I., Archbishop of Chicago, on September 30, 2012. The Reverend Theodore Ploplis, Coordinator of Spiritual Services at Chicago's St. Joseph Hospital and a priest of the Archdiocese of Chicago, also assumed duties as the first Rector of the National Shrine, effective September 1, 2012.

The National Shrine will now function as a stand-alone center for prayer, worship, spiritual care and pilgrimage. Today, it is an architectural gem of gold mosaics, Carrara marble, frescoes and Florentine stained glass. As part of its restoration plan, it will be surrounded by a large condominium development on North Lakeview, the former site of Columbus Hospital.

Other shrines to Mother Cabrini

The major portion of her body is now enshrined under glass in the altar of the shrine. Today, the Shrine continues as a center of welcome for new immigrants and pilgrims of many nationalities who come to pray and reflect.[14] The street to the west of the shrine was renamed Cabrini Boulevard in her honor.

Another Mother Cabrini Shrine is located in Golden, Colorado. Arriving in Denver in 1902, Mother Frances Xavier Cabrini, founder of the Missionary Sisters of the Sacred Heart of Jesus, established in 1904 the Queen of Heaven Orphanage.[15] During a trip in 1902 to visit the Italian workers and their families in the Clear Creek, Argentine, and South Park mining districts, Frances X. Cabrini discovered a property on the east slope of Lookout Mountain owned by the town of Golden. No reliable source of water was known to exist on the property at that time, although there were two barns and a springhouse built in the 1890s. In 1909 -1910, she negotiated the purchase of this property as a summer camp for the girls at the Queen of Heaven Orphanage in Denver, Colorado. A farming operation, with poultry, livestock and dairy cows, was established and maintained by three of the Sisters of the Sacred Heart.[16]

In September 1912, Mother Cabrini directed the sisters where to dig to find water. A replica of the grotto of Lourdes was built over the spring in 1929 and replaced in 1959 by a second built of sandstone. On Mother Cabrini’s last visit to the foothills in 1912 she authorized the building of the Stone House to serve as a dormitory for the girls. The house was to be built of native rock. Construction was completed in 1914. The house was used as a summer camp for the girls from the Queen of Heaven orphanage. In 1967 a system of foster care took over the responsibilities of the orphanage and Queen of Heaven closed.[15] The summer camp became a year around retreat facility, and a place for small prayer gatherings. The Stone House is listed on the National Register of Historic Places.

In April 1948, a St. Frances Cabrini Shrine Committee was incorporated. The convent, completed in 1970, contains a chapel dedicated to the Sacred Heart, and has an exhibit of artifacts and clothing used by Mother Cabrini. The stained-glass windows of the convent chapel came from Villa Cabrini in Burbank, California, which was a school formerly sponsored by the Missionary Sisters.[16]