Franche-Comté (French pronunciation: ​[fʁɑ̃ʃ kɔ̃te]; literally "Free County", Frainc-Comtou dialect: Fraintche-Comtè; Arpitan: Franche-Comtât) is a former administrative region and a traditional province of eastern France. Since 1 January 2016, it is part of the new region Bourgogne-Franche-Comté.[2] It is composed of the modern departments of Doubs, Jura, Haute-Saône and the Territoire de Belfort. In 2009, its population was 1,168,208.

The principal cities are the capital Besançon, Belfort and Montbéliard (the last two form the aire urbaine Belfort-Montbéliard-Héricourt-Delle). Other important cities are Dole (the capital before the region was conquered by Louis XIV in the late seventeenh century), Vesoul (capital of Haute-Saône), Arbois (the "wine capital" of the Jura), and Lons-le-Saunier (the capital of Jura).

The region has been inhabited since the Paleolithic age and was occupied by the Gauls. Little touched by the Germanic migrations, it was part of the territory of the Alemanni in the fifth century, then the Kingdom of Burgundy from 457 to 534. It was Christianized through the influence of St. Columbanus, who founded several monasteries there. In 534, it became part of the Frankish kingdom. In 561 it was included in the Merovingian Kingdom of Burgundy under Guntram, the third son of Clotaire I. In 613, Clotaire II reunited the Frankish Kingdom under his rule, and the region remained a part of the Kingdom of Burgundy under the later Merovingians and Carolingians.

The name Franche Comté de Bourgogne (Free County of Burgundy) did not appear officially until 1366. It had been a territory of the County of Burgundy from 888, the province becoming subject to the Holy Roman Empire in 1034. It was definitively separated from the neighboring Duchy of Burgundy upon the latter's incorporation into the Kingdom of France in 1477. That year at the Battle of Nancy during the Burgundian Wars, the last duke, Charles the Bold, was killed in battle. Although the County, along with the Duchy, was seized by King Louis XI of France, in 1492 his son Charles VIII ceded it to Philip of Austria, the grandson and heir of Charles the Bold. When Philip's son, Emperor Charles V, inherited the Spanish throne in 1516, Franche-Comté, along with the rest of the Burgundian lands, passed to the Spanish. Franche-Comté was captured by France in 1668, but returned to Spain under the Treaty of Aix-la-Chapelle. It was conquered a second time in 1674, and finally was ceded to France in the Treaty of Nijmegen (1678). Enclaves such as Montbéliard remained outside French control.

Franche-Comté was one of the last parts of France to have serfdom. In 1784, half of the population consisted of serfs, accounting for 400,000 out of the 1 million French serfs. Landowners took one-twelfth of the sales price if a serf (mainmortable) wanted to sell up. Serfs were not forced to stay on the land, but the lord could claim droit de suite, whereby a peasant who died away from his holding left it to the lord, even if he had heirs. A runaway serf's land was forfeit after ten years. Louis XVI issued a decree banning these practices on 8 August 1779, but the Parlement of Besançon blocked this until 1787.

The population of the region fell by a fifth from 1851 to 1946, reflecting low French natural growth and migration to more urbanized parts of the country. Most of the decline occurred in Haute-Saône and Jura, which remain among the country's more agriculture-dependent areas.

This region borders Switzerland and shares much of its architecture, cuisine, and culture with its neighbour. Between the Vosges range of mountains to the north and the Jura range to the south, the landscape consists of rolling cultivated fields, dense pine forest, and rampart-like mountains. Not so majestic as the Alps, the Jura mountains are more accessible and are France's first cross-country skiing area. It is also a superb place to hike, and there are some fine nature trails on the more gentle slopes. The Doubs and Loue valleys, with their timbered houses perched on stilts in the river, and the high valley of Ain, are popular visitor areas. The Région des Lacs is a land of gorges and waterfalls dotted with tiny villages, each with a domed belfry decorated with mosaic of tiles or slates or beaten from metal. The lakes are perfect for swimming in the warmer months. The summits of Haut Jura have wonderful views across Lac Léman (Lake Geneva) and toward the Alps.

Forty percent of the region's GDP is dependent on manufacturing activities, and most of its production is exported. Construction of automobiles and their parts is one of the most buoyant industries there. Forestry exploitation is steadily growing, and 38% of the agriculture is dairy and 17% cattle farming. The region has a large and lucrative cheese-making industry, with 40 million tonnes of cheese produced here each year, much of which is made by fruitières (traditional cheese dairies of Franche-Comté); for instance, Comté cheese comes from this region. 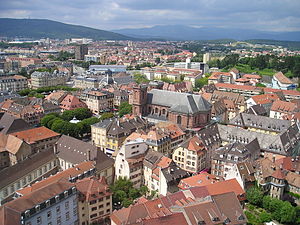 Among the regional languages of France, the term Franc-comtois refers to two dialects of two different languages. Franc-comtois is the name of the dialect of Langue d'Oïl spoken by people in the northern part of the region. The dialect of Arpitan has been spoken in its southern part since as early as the thirteenth century (the southern two-thirds of Jura and the southern third of Doubs). Both are recognized as languages of France.