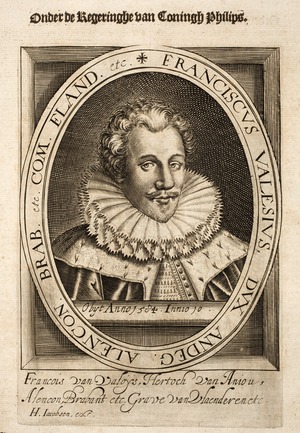 Engraving of Francis, Duke of Anjou

An attractive child, he was unfortunately scarred by smallpox at age eight, and his pitted face and slightly deformed spine did not suit his august birth name of Hercule ("Hercules" in English and Latin). He changed his name to Francis in honour of his late brother Francis II of France when he was confirmed.

In 1574, following the death of his brother Charles IX of France and the accession of his other brother Henry III of France, he became heir to the throne. In 1576, he was made Duke of Anjou, Touraine, and Berry.

In 1576, he negotiated the Edict of Beaulieu during the French Wars of Religion. In 1579, he was invited by William the Silent to become hereditary sovereign to the United Provinces. On 29 September 1580, the Dutch States General (with the exception of Zeeland and Holland) signed the Treaty of Plessis-les-Tours with the Duke, who would assume the title "Protector of the Liberty of the Netherlands" and become the sovereign.

The Duke of Alençon and the Huguenots

During the night of 15 September 1575, Alençon ran from the French court after being alienated by his brother King Henry III. Both Henry III and Catherine de' Medici feared he would join the Protestant rebels. These fears proved well founded, Francis joined the prince of Condé and his forces in the south. When they were also joined by the King of Navarre’s forces, following his escape from court in February 1576, this combined army was enough to force Henry III, without a pitched battle of any sort, to capitulate and sign the very pro-Protestant ‘peace of Monsieur’, or Edict of Beaulieu on 6 May 1576. By ‘secret treaties’ that formed part of this peace settlement, many on the Protestant side were rewarded with land and titles. Francis was awarded the Duchy of Anjou (along with other lands) and thus became the Duke of Anjou.

At the same time, in 1579, arrangements began to be made for marrying him to Elizabeth I of England. Alençon, now Duke of Anjou, was in fact the only one of Elizabeth's foreign suitors to court her in person. He was 24 and Elizabeth was 46. Despite the age gap, the two soon became very close, Elizabeth dubbing him her "frog". While a few believe this nickname was attributed to a frog-shaped earring he had given her, "frog" has been an unflattering slang nickname for the French for centuries similar to the slang nickname of "Limey" for the British or "kraut" for the Germans. Queen Elizabeth often used unflattering slang names for her favorites such as "pygmy" for Robert Cecil who was short of stature and humped from spinal scoliosis. Thus, her use of the slang name "frog" was consistent with her habits. Whether or not Elizabeth truly planned marrying Anjou is a hotly debated topic. It is obvious that she was quite fond of him, knowing that he was probably going to be her last suitor. There are many anecdotes about their flirting. The match was controversial in the English public: English Protestants warned the Queen that the "hearts [of the English people] will be galled when they shall see you take to husband a Frenchman, and a Papist ... the very common people well know this: that he is the son of the Jezebel of our age",[2] referring to the Duke's mother, Catherine de' Medici. Of her Privy Council, only William Cecil, Lord Burghley, and Thomas Radclyffe, 3rd Earl of Sussex, supported the marriage scheme wholeheartedly. Most notable councillors, foremost among them Robert Dudley, 1st Earl of Leicester, and Sir Francis Walsingham, were strongly opposed, even warning the Queen of the hazards of childbirth at her age.

Between 1578 and 1581, the Queen resurrected attempts to negotiate a marriage with the Duke of Alençon, who had put himself forward as a protector of the Huguenots and a potential leader of the Dutch. In these years Walsingham became friends with the diplomat of Henry of Navarre in England, the anti-monarchist Philippe de Mornay. Walsingham was sent to France in mid-1581 to discuss an Anglo-French alliance, but the French wanted the marriage agreed first, and Walsingham was under instruction to obtain a treaty before committing to the marriage. He returned to England without an agreement. Personally, Walsingham opposed the marriage, perhaps to the point of encouraging public opposition. Alençon was a Catholic, and as his elder brother, Henry III, was childless, he was heir to the French throne. Elizabeth was probably past the age of childbearing, and had no clear successor. If she died while married to the French heir, her realms could fall under French control. By comparing the match of Elizabeth and Alençon with the match of the Protestant Henry of Navarre and the Catholic Margaret of Valois, which occurred in the week before the St. Bartholomew's Day massacre, the "most horrible spectacle" he had ever witnessed, Walsingham raised the spectre of religious riots in England in the event of the marriage proceeding. Elizabeth put up with his blunt, often unwelcome, advice, and acknowledged his strong beliefs in a letter, in which she called him "her Moor [who] cannot change his colour".

At last, Elizabeth pragmatically did not judge the union a wise one, considering the overwhelming opposition of her advisors. She continued, however, to play the engagement game, if only to warn Philip II of Spain what she might do, if it became necessary. Finally, the game played itself out, and Elizabeth bade her "frog" farewell in 1581. On his departure she penned a poem, "On Monsieur's Departure", which, taken at face value, has lent credence to the notion that she may really have been prepared to go through with the match.

Anjou in the Netherlands 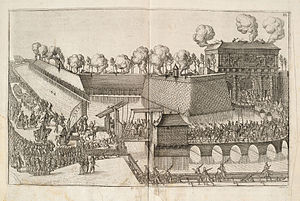 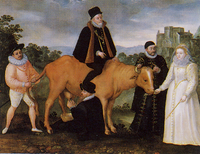 Satirical Flemish painting painted c.1586, three years after Anjou's Antwerp fiasco; depicting a cow which represents the Dutch provinces. King Philip II of Spain is vainly trying to ride the cow, drawing blood with his spurs. Queen Elizabeth I is feeding it while William of Orange holds it steady by the horns. The cow is defecating on the Duke of Anjou, who is holding its tail.

Anjou continued on to the Netherlands. He did not arrive until 10 February 1582, when he was officially welcomed by William in Flushing. In spite of the Joyous Entries he was accorded in Bruges and Ghent and his ceremonious installation as Duke of Brabant and Count of Flanders, Anjou was not popular with the Dutch and Flemish, who continued to see the Catholic French as enemies; the provinces of Zeeland and Holland refused to recognise him as their sovereign, and William, the central figure of the "Politiques" who worked to defuse religious hostilities, was widely criticized for his "French politics". He is now thought to have been the patron behind the "Valois tapestries" presented to Catherine, which presented major figures in Catherine's court against scenes of festivity.[3] When Anjou's French troops arrived in late 1582, William's plan seemed to pay off, as even the Duke of Parma feared that the Dutch would now gain the upper hand.

However, Anjou himself was dissatisfied with his limited power, and decided to take control of the Flemish cities of Antwerp, Bruges, Dunkirk, and Ostend by force.

He would personally lead the attack on Antwerp. To fool the citizens of Antwerp, Anjou proposed that he should make a "Joyous Entry" into the city, a grand ceremony in which he would be accompanied by his French troops.[citation needed] On 18 January 1583, Anjou entered Antwerp, but the citizens had not been deceived. The city militia ambushed and destroyed Anjou's force in the French Fury. Anjou barely escaped with his life.[4] 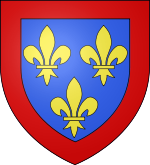 The debacle at Antwerp marked the end of his military career. His mother, Catherine de' Medici is said to have written to him that "would to God you had died young. You would then not have been the cause of the death of so many brave gentlemen".[5] Another insult followed when Elizabeth I formally ended her engagement to him after the massacre. The position of Anjou after this attack became impossible to hold, and he eventually left the country in June. His departure also discredited William, who nevertheless maintained his support for Anjou.

Soon Anjou fell seriously ill with "tertian ague", malaria. Catherine de' Medici brought him back to Paris, where he was reconciled to his brother, King Henry III of France, in February 1584. Henry even embraced his brother, whom he had famously called le petit magot ("little macaque"). By June, the Duke of Anjou was dead. His premature death meant that the Huguenot Henry of Navarre became heir-presumptive, thus leading to an escalation in the French Wars of Religion.