Sir Francis Burdett, 5th Baronet (25 January 1770 – 23 January 1844) was an English reformist politician, the son of Francis Burdett and his wife Eleanor, daughter of William Jones of Ramsbury manor, Wiltshire, and grandson of Sir Robert Burdett, Bart. From 1820 until his death he lived at 25 St James's Place.

Sir Francis Burdett (5th Bart.) was a member of the Burdett family of Bramcote and inherited the family baronetcy from his grandfather Sir Robert Burdett in 1797.

He was educated at Westminster School and the University of Oxford. When young, he was for a long time the notorious lover of Lady Oxford (according to the journal of Thomas Raikes), and afterwards travelled in France and Switzerland. He was in Paris during the earlier days of the French Revolution.

Returning to England in 1793, he married Sophia Coutts, the second daughter of the wealthy banker Thomas Coutts.[1] She brought him the large fortune of £25,000. Their youngest daughter – Angela Burdett-Coutts – ultimately inherited the Coutts fortune and became a well-known philanthropist.

In 1796, he became Member of Parliament for Boroughbridge, having purchased this seat from the representatives of the Duke of Newcastle, and in 1797 succeeded his grandfather as 5th Baronet.

Baronet and Member of Parliament

His inheritance included the family seat of Foremarke Hall and 'the hamlets of Ingleby and Foremark (sometimes referred to as a manor) which were under his Lordship'.[2]

In Parliament he soon became prominent as an opponent of William Pitt the Younger, and as an advocate of popular rights. He denounced the war with France, the suspension of the Habeas Corpus Act, and the proposed exclusion of John Horne Tooke from parliament, and quickly became the idol of the people. In 1797 he made the acquaintance of Horne Tooke, whose pupil he became, not only in politics, but also in philology. He was instrumental in securing an inquiry into the condition of Coldbath Fields Prison, and as a result was for a time prevented by the government from visiting any prison in the kingdom. 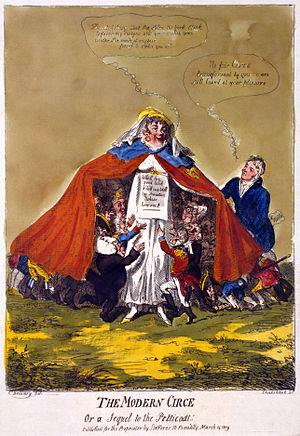 "The modern Circe or a sequel to the petticoat", caricature of Mary Anne Clarke, the mistress of the Duke of York, Prince Frederick, by Isaac Cruikshank, published 15 March 1809. Frederick would resign as Commander-in-Chief 10 days later.

At the general election of 1802 Burdett was returned as Member of Parliament for the county of Middlesex, but his return was declared void in 1804 and he lost the ensuing by-election owing to the machinations of the returning officer.[3] In 1805 this return was amended in his favor, but as this decision was again quickly reversed, Burdett, who had spent an immense sum of money over the affair, declared he would not stand for parliament again.

At the general election of 1806 Burdett was a leading supporter of James Paull, the reform candidate for the City of Westminster; but in the following year a misunderstanding led to a duel between Burdett and Paull in which both combatants were wounded. At the general election in 1807, Burdett, in spite of his reluctance, was nominated for Westminster, and amidst great enthusiasm was returned at the top of the poll.

In January 1809, Burdett participated with Gwyllym Wardle in the Duke of York scandal, by which Prince Frederick was relieved of his duties as Commander-in-Chief of the Forces, only to be reinstated two years later when Wardle had been shown to encourage the hostile testimony of Mary Anne Clarke, the mistress of Frederick.[4]

He again attacked abuses, agitated for reform, and in 1810 came sharply into collision with the House of Commons. The radical John Gale Jones had been committed to prison by the House, and Burdett questioned the power of the House to take this step, and tried in vain to have him released. He then issued a revised edition of his speech on this occasion which was published by William Cobbett in the Weekly Register.

A warrant for his arrest

The House voted this action a breach of privilege, and the speaker issued a warrant for Burdett's arrest. The charge was libelling the House of Commons. Barring himself in his house for two days, he defied the authorities, while a mob gathered in his defence. Burdett's colleague Thomas Cochrane offered assistance, but, realizing that Cochrane intended to use military tactics during this civil and political affair, Burdett declined. At length the house was entered, and under an escort of soldiers he was conveyed to the Tower of London. Released when parliament was in recess, he caused his supporters much disappointment by returning to Westminster by water, and so avoiding a demonstration in his honor. He then brought legal actions against the speaker and the sergeant-at-arms, but the courts upheld the action of the House. 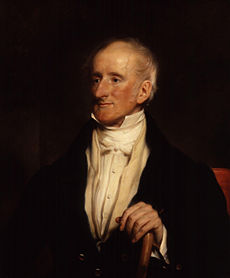 In parliament Burdett denounced corporal punishment in the army, and supported all attempts to check corruption, but his principal efforts were directed towards procuring a reform of parliament, and the removal of Roman Catholic disabilities. In 1809 he had proposed a scheme of parliamentary reform, and returning to the subject in 1817 and 1818 he anticipated the Chartist movement by suggesting universal male suffrage, equal electoral districts, vote by ballot, and annual parliaments; but his motions met with very little support. He succeeded, however, in carrying a resolution in 1825 that the House should consider the laws concerning Roman Catholics. This was followed by a bill embodying his proposals, which passed the Commons but was rejected by the House of Lords. In 1827 and 1828 he again proposed resolutions on this subject, and saw his proposals become law in 1829.

In 1820 Burdett had again come into serious conflict with the government. Having severely censured its action in print with reference to the Peterloo Massacre, he was prosecuted at Leicester assizes, fined £1,000, and committed to prison by Best, J. for three months for the crime of "composing, writing, and publishing a seditious libel" with explanation: "My opinion of the liberty of the press is that every man ought to be permitted to instruct his fellow subjects; that every man may fearlessly advance any new doctrines, provided he does so with proper respect to the religion and government of the country; that he may point out errors in the measures of public men; but he must not impute criminal conduct to them. The liberty of the press cannot be carried to this extent without violating another equally sacred right; namely, the right of character. This right can only be attacked in a court of justice, where the party attacked has a fair opportunity of defending himself".[5][6]

After the passing of the Reform Act 1832, the ardour of the veteran reformer was somewhat abated, and a number of his constituents soon took umbrage at his changed attitude.

His legacy and death 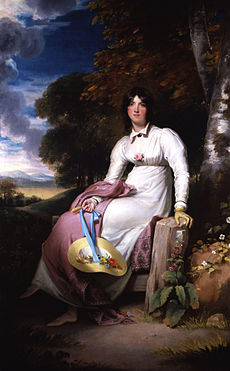 Consequently he resigned his seat early in 1837, but was re-elected. However, at the general election in the same year he forsook Westminster and was elected member for North Wiltshire, which seat he retained, acting in general with the Conservatives, until his death. He was nicknamed "Old Glory" by fellow conservatives. His wife, Lady Burdett, to whom he was devoted, died on 13 January 1844. Sir Francis, then two days short of his 74th birthday, became inconsolable and felt he had nothing left to live for. He refused all food and died just ten days later on 23 January 1844. He and his wife were buried at the same time in the same vault at Ramsbury Church, Wiltshire. He left a son, Robert, who succeeded to the baronetcy, and who inherited his very large fortune, and five daughters, the youngest of whom became the celebrated Baroness Burdett-Coutts after inheriting the Coutts fortune from her grandfather's widow Harriet, Duchess of St Albans and appending the Coutts surname under the terms of Harriet's will. He was a member of the Literary Association of the Friends of Poland. Burdett had also brought up two of the sons of his friend the Irish nationalist Roger O'Connor. Both became notable political radicals. One of these was Feargus O'Connor, one of the main leaders of the Chartists.[7] The other was Francisco Burdett O'Connor, who fought in Simón Bolívar's army.