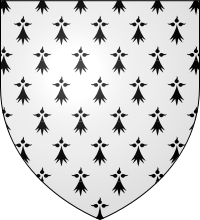 Coat of Arms of Francis II, Duke of Brittany.

Francis II of Brittany (in Breton Frañsez II, in French François II) (23 June 1433[citation needed] – 9 September 1488) was Duke of Brittany from 1458 to his death. He was the son of Richard of Brittany and the grandson of Duke John V. A recurring theme in Francis' life would be his quest to maintain the independence of Brittany from France. As such, his reign was characterised by conflicts with King Louis XI of France and with his daughter, Anne of France, who served as regent during the minority of her brother, Charles VIII. The armed and unarmed conflicts between 1484-1488 have been called the Mad War (la Guerre Folle) and also the War of the Public Weal.

Francis II was born on 23 June 1433 to Richard, Count of Étampes and his wife Marguerite d'Orléans. Richard was the youngest son of John IV, Duke of Brittany. Richard's older brothers John and Arthur both succeeded their father as duke, but upon Arthur's death in 1458, the only legitimate male heir was his nephew, Francis.

Protector of the House of Lancaster

Francis II serendipitously became the protector of England's House of Lancaster in exile from 1471-1484.

During the latter half of the 15th century, civil war existed in England as the Houses of York and Lancaster fought each other for the English throne. In 1471, the Yorkists defeated their rivals in the battles of Barnet and Tewkesbury. The Lancastrian King Henry VI and his only son, Edward of Lancaster, died in the aftermath of the Battle of Tewkesbury. Their deaths left the House of Lancaster with no direct claimants to the throne. The Yorkist king, Edward IV, was in complete control of England.[1] He attainted those who refused to submit to his rule, such as Jasper Tudor and his nephew Henry, naming them as traitors and confiscating their lands.

The Tudors tried to flee to France but strong winds forced them to land in the Duchy of Brittany, where they were taken into the custody of Francis II.[2] Henry Tudor, the only remaining Lancastrian noble with a trace of royal bloodline, had a weak claim to the throne,[1] and Edward regarded him as "a nobody."[3] Francis II, however, viewed Henry as a valuable tool to bargain for England's aid in conflicts with France and therefore kept the Tudors under his protection.[3]

In October 1483, Henry launched a failed invasion of England from Brittany. His fleet of 15 chartered vessels was scattered by a storm, and his ship reached the coast of England in company with only one other vessel. Henry realized that the soldiers on shore were Richard III's men, and so he decided to abandon the invasion and return to Brittany. The Duke of Buckingham, who was Henry's main conspirator in England, was convicted of treason and beheaded in Salisbury on 2 November 1483, in fact before Henry's ships made landfall.[4] Henry's conspiracy against Richard III had unravelled, and without Buckingham or Henry, the rebellion was easily crushed.[5]

Survivors of the failed uprising then fled to Brittany, where they openly supported Henry's claim to the throne.[6] On Christmas Day in 1483 at Rennes Cathedral, Henry Tudor swore an oath to marry Edward IV's daughter, Elizabeth of York, and thus unite the warring houses of York and Lancaster.[7] Henry's rising prominence made him a great threat to Richard III, and the Yorkist king made several overtures to Francis II to surrender the young Lancastrian. Francis II refused, holding out for the possibility of better terms from Richard.[8] In mid-1484, Francis was incapacitated by illness and while recuperating, his treasurer, Pierre Landais, took over the reins of government. Landais reached an agreement with Richard III to send Henry and his uncle back to England in exchange for military and financial aid. John Morton, a bishop of Flanders, learned of the scheme and warned the Tudors; the Tudors then fled to France.[9] The French court allowed them to stay and provided resources.[10] For the French, the Tudors were useful pawns to ensure that Richard's England did not interfere with French plans to annex Brittany.[11] Thus the loss of the Lancastrians seriously played against the interests of Francis II.[lower-alpha 1]

Circa 1136, King Stephen of England named Alan of Penthièvre of Brittany (also known as Alan the Black) the 1st Earl of Richmond. After Alan, the title and its possessions (the Honour of Richmond) were typically bestowed upon the Dukes of Brittany, with a few interruptions, through the ducal reign of John V, which ended in 1399. After John V, the English kings would bestow the title Earl of Richmond on nobles other than the Dukes of Brittany, including Edmund Tudor, Henry Tudor's father. However the dukes of Brittany from John VI through Francis II would continue to use the titulary Earl of Richmond. It is possible that Francis willed whatever remained of his claims to the earldom and the Honour of Richmond to Henry Tudor. On successfully gaining the English crown after the Battle of Bosworth Field in 1485, Henry VII merged the earldom and its possessions into the crown.[lower-alpha 2]

Louis XI was renowned as a cunning adversary and a master at diplomacy, if not the military arts. His contemporary nickname was "The Universal Spider," reflecting his constant political plotting.

Francis II became a member of the League of the Public Weal.[lower-alpha 3] This was an alliance of feudal nobles organized in 1465 in defiance of the centralized authority of King Louis XI of France, whose declared aim was to enlarge France by annexing all of the independent duchies - Burgundy, Berry, Normandy, Orléans, Brittany, etc. It was masterminded by Charles the Bold, Count of Charolais, son of the Duke of Burgundy, with the king's brother Charles, Duke of Berry, as a figurehead.

In 1467 Charles the Bold inherited the Duchy of Burgundy, which held fiefs in France that included the counties of Artois and Flanders, and the Imperial lands of Holland, Brabant, and Luxembourg. As Duke of Burgundy, Charles aspired to forge a kingdom of his own between France and Germany, approximating the former domains of the Frankish Emperor Lothair I. In pursuit of this goal, Charles was killed in 1477 at the Battle of Nancy against René II, Duke of Lorraine and a hired army of Swiss mercenaries, and Louis was saved from his greatest adversary. The great Duchy of Burgundy was then absorbed into the Kingdom of France, and the League of the Public Weal was essentially defeated, although several members would re-ally for the Mad War in 1485.

The fortunes of Francis II and Brittany would continue to suffer after Louis XI's death in 1483, as Louis' daughter Anne of France would serve as regent for his successor, Charles VIII.

Regency of Anne of France

Francis II was anxious to maintain his duchy's independence during the minority of Charles VIII of France. He aligned himself with Louis, the Duke of Orléans (the future Louis XII) and Charles, Count of Angoulême, against the regency of Anne of France. Anne had been pursuing the same underhand politics as her father, Louis XI, towards Brittany.

In focusing on relations with his neighbour France, however, Francis II neglected his own realm. His corrupt and oppressive prime minister, Guillaume Chauvin, was overthrown by treasurer general Pierre Landais in 1477. A large part of the nobility had been bribed by Anne and Charles and supported them in their eagerness to subjugate Brittany. These nobles performed a coup d'état against Landais, who was eventually hanged in 1485.

In 1486, the Estates of Brittany confirmed the succession of Brittany on Francis' daughter Anne, to further assure the Duchy's independence from France. The Treaty of Chateaubriant was signed with France in 1487 and reaffirmed Brittany's independence. Despite the Treaty of Chateaubriant, however, the French continued to harass the Duchy. Under the leadership of Louis II de la Trémoille, the French royal army struck against Vannes and Fougères, controlling access to Brittany.

Francis II then allied with Maximilian I, Holy Roman Emperor, against France. Alain d'Albret, a rebel lord, believing he would marry Francis' daughter Anne, reinforced the Breton army with 5000 troops supplied by the king of Spain. Maximilian I of Austria also sent 1500 men, and Edward Woodville, Lord Scales, brought over a force of archers from Britain.[17] However Brittany was defeated 28 July 1488 in the Battle of Saint-Aubin-du-Cormier. This battle also destroyed the power-base of the warring noble leaders as Edward Woodville was killed, and Louis of Orléans and Jean, Prince of Orange were captured. Alain d'Albret and the Maréchal de Rieux succeeded in escaping, and played an important part in continuing the conflict.

A few days later, on 10 August, Francis was forced to sign the Treaty of Verger. Under the terms of the treaty, the duke was compelled to submit himself and his duchy as a vassal of the king of France, and to expel foreign princes and troops from Brittany. It also restricted his ability to marry his children to suitors of his choosing and required that he cede territory in Saint-Malo, Fougères, Dinan, and Saint-Aubin to the king as a guarantee that in the absence of a male successor the king would determine the succession. Francis died a few months later as a result of a fall from his horse during a leisurely ride. He left only a daughter, Anne of Brittany, so the treaty was used to force her, as his successor, to marry Charles VIII, and later Louis XII. Despite the French victory and the signing of the treaty, la Guerre Folle dragged on beyond Francis II's death for three more years until December 1491, when Anne married Charles VIII.

Francis II is interred in an elaborate tomb in the Nantes Cathedral. His tomb was commissioned by his daughter Anne, and is an important early example of Renaissance sculpture in France.[lower-alpha 4] 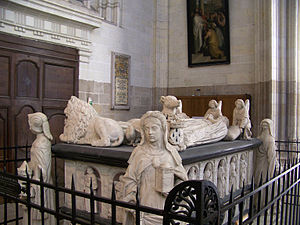 The Tomb of Francis II

His first wife was his cousin Margaret of Brittany, the first daughter of Duke Francis I. They had one son who died shortly after his birth:

His second wife was Margaret of Foix, Princess of Navarre. They had two children:

Breton nobles acted to safeguard Anne as their Duchess and to protect the Duchy's independence for which Francis had fought so hard. In 1489 these nobles signed the Treaty of Redon with Henry VII; that treaty between Brittany and England was intended to prevent the annexation of Brittany by France. However in 1491 Charles VIII of France invaded Brittany and forced Anne to marry him, thereby gaining control of the duchy. Then in 1492 Henry VII signed the Treaty of Etaples with France, effectively removing England's defense of Breton independence in return for promises from the French to no longer support Perkin Warbeck, pretender to the English throne, and to pay a war indemnity. The duchy's independence was all but lost as the process of merging it into the French crown began, and Brittany's strongest ally was neutralized. Anne, however, would become a formidable Queen Consort and would fight to preserve Brittany's independence and Francis II's legacy for herself, the Breton people, and her descendants.