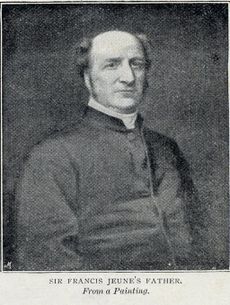 Jeune was Chief Master of King Edward's School, Birmingham from 1835 to 1838, and since 1951 Jeune House has been named after him, competing in the school's annual Cock House Championship.

He was Vice-Chancellor of Oxford University from 1858 to 1862. Jeune was consecrated a bishop on St Peter's day 1864, by Charles Longley, Archbishop of Canterbury at Canterbury Cathedral.[2]