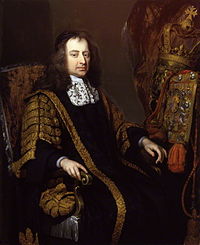 Francis North was educated at St John's College, Cambridge.[3] He was an eminent lawyer, Solicitor-General (1671), Attorney-General (1673), and Chief Justice of the Common Pleas (1675), and in 1679 was made a member of the Council of Thirty and, on its dissolution, of the Cabinet. He was a man of wide culture and a staunch royalist,[2] although he opposed the absolutist tendencies of Sunderland and Jeffreys, his two bitterest political enemies.

Guilford sat as a judge at some of the Popish Plot trials, and all like his judicial colleagues who did so he has been accused of excessive credulity in believing the absurd lies of Titus Oates and the other informers.[4] On the other hand it has been argued that the senior Chief Justice, Sir William Scroggs, so dominated the proceedings that none of the other judges had any influence on the outcome.[5] If North succumbed to the prevailing hysteria, so did many others: his brother Roger wrote that "it was a time when wise men behaved like stark fools".[6]

Guilford was hostile to Lord Jeffreys, and regarded the future Lord Chief Justice, Sir Robert Wright, as utterly unfit for any judicial office (he was well qualified to assess Wright's ability since Wright as a young barrister had relied on North to write his legal opinions for him).[7] He has been criticised for remaining in office after Wright was made Chief Justice over his vehement objections, especially as it must have been clear that he no longer had any influence over judicial appointments.[8] On the other hand he may have felt that keeping Jeffreys out of the Lord Chancellorship was a sufficient justification for clinging to office.

Guilford was generally respected for his integrity, but he was sometimes accused of self-importance and a lack of a sense of humour; for example he showed excessive agitation at the ridiculous rumour spread by Sunderland and Jeffreys that he had been seen riding on a rhinoceros.[9] Sunderland hated North with a passion, describing him as the most unfit man who ever held his office: "partial, unreasonable, corrupt, arbitrary and ignorant". There is no reason to believe any of these accusations: certainly no one, other than Sunderland, ever claimed that Guilford was either corrupt or ignorant. [10]

Guilford died, it seems rather unexpectedly, at his country house, Wroxton Abbey, near Banbury, on 5 September 1685, aged only 47; although he had apparently been suffering from stress and overwork, the precise reasons for his early death are unclear. His rather cryptic last words were: "It will not do".[11] 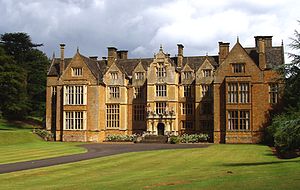 In 1672 he married Lady Frances Pope, daughter and co-heiress of Thomas Pope, 3rd Earl of Downe, who inherited the Wroxton estate, and he was succeeded as 2nd baron by his son Francis (1673–1729).[2]

Like many upper-class Englishmen of his time, North was devoted to music. Less typically for his time and class he had a keen interest in musical theory (as did his brother Roger), and published a book on the subject, A Philosophical essay on musick (1677), which has been praised as "an admirably clear exposition of the physical basis of music".[12]