Francis Godolphin Osborne, 5th Duke of Leeds KG PC (29 January 1751 – 31 January 1799), styled Marquess of Carmarthen until 1789, was a British politician. He notably served as Foreign Secretary under William Pitt the Younger from 1783 to 1791. He also was Governor of Scilly.

Leeds was the son of Thomas Osborne, 4th Duke of Leeds, by his wife Lady Mary, daughter of Francis Godolphin, 2nd Earl of Godolphin, and Henrietta Godolphin, 2nd Duchess of Marlborough. He was educated at Westminster School and at Christ Church, Oxford.

Leeds was a Member of Parliament for Eye in 1774 and for Helston from 1774 to 1775; in 1776 having received a writ of acceleration as Baron Osborne, he entered the House of Lords, and in 1777 Lord Chamberlain of the Queen's Household. In the House of Lords he was prominent as a determined foe of the prime minister, Lord North, who, after he had resigned his position as chamberlain, deprived him of the office of Lord Lieutenant of the East Riding of Yorkshire in 1780. He regained this, however, two years later.

Early in 1783 Leeds was selected as ambassador to France, but he did not take up this appointment, becoming instead Secretary of State for Foreign Affairs under William Pitt the Younger in December of the same year. As secretary he was little more than a cipher: although they were friends of long standing, Pitt developed a poor opinion of Leeds' judgement and frequently had to restrain his bellicose instincts. The abandonment of his anti-Russian policy was the final blow and he left office in April 1791. He had done nothing to foster good relations with the newly independent United States of America: both John Adams and Thomas Jefferson complained of his obstructive attitude and " aversion to having anything to do with us ".[1] Subsequently he took little part in politics: in 1792, hearing rumours that a new coalition might be formed, he unwisely offered himself as its head and met with a firm rebuff from both Pitt and the King.[2] 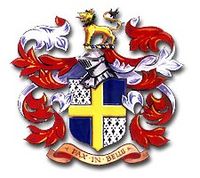 Ancestral arms of the Osborne family, Dukes of Leeds

Leeds married firstly in 1773 Lady Amelia Darcy, daughter of Robert Darcy, 4th Earl of Holderness on 29 November 1773. Lady Amelia became Baroness Darcy de Knayth and Baroness Conyers in her own right in 1778. They were divorced in 1779. Their marriage produced three children:

He married secondly Catherine, daughter of Thomas Anguish, in 1788 and had two more children:

Leeds died in London in January 1799, aged 48, and was buried in the Osborne family chapel at All Hallows Church, Harthill, South Yorkshire. He was succeeded in the dukedom by his eldest son from his first marriage, George Osborne, 6th Duke of Leeds. His second son from his first marriage, Lord Francis Osborne, was created Baron Godolphin in 1832. The dowager Duchess of Leeds died in October 1837, aged 73. Leeds's Political Memoranda were edited by Oscar Browning for the Camden Society in 1884, and there are eight volumes of his official correspondence in the British Museum.