He was born in Stamford, Lincolnshire, England, and educated at Stamford School. Peck was educated at Charterhouse School, before continuing on to St John's College, Cambridge.[1] He was elected to the Society of Antiquarians in 1732 and corresponded with many of the leading antiquaries and historians of the age; including Thomas Hearne, Browne Willis, Roger and Samuel Gale, and William Stukeley.

His major publication is the Desiderata Curiosa, a two-volume miscellany (published 1732–1735). There is an engraved frontispiece portrait of Peck (by R. Collins, from life) in volume I, and nine other plates, as well as integral engravings in the text; Stukeley presented the plate of Henry Wykys, vicar of Stamford. The work contains a major biography of Sir William Cecil, Lord Burghley, Queen Elizabeth I's Lord High Treasurer and chief advisor for much of her reign. 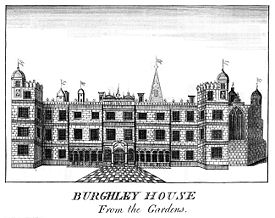 Burghley House, one of the seats of Lord Burghley from Peck's Desiderata Curiosa.

Peck, Francis, Desiderata Curiosa. "Volume the First. Containing, I. The complete Statesman, exemplified in the Life and Action of Sir William Cecil, Lord Burghley, Lord High Treasurer of England in Queen Elizabeth’s Time; largely setting forth both his public and private Conduct. With many Notes from his own MS. Diary, and other Authors [together with 29 other tracts named on the title-pages and] many other Memoirs, Letters, Wills, and Epitaphs; amounting in all to above 150 curious Articles; all now published from original MSS. communicated by eminent Persons … Adorned with Cuts. London: Printed 1732"

Some copies of the first edition have a cancel title page for Volume I, (as called for in the "Directions to the Binder" in Volume II). The cancelland is sometimes retained as the "general title-page".