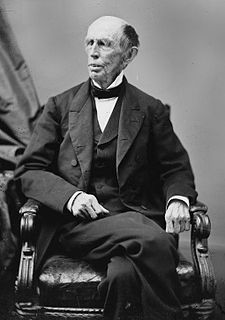 Francis Preston Blair, Sr. (April 12, 1791 – October 18, 1876) was an American politician. As editor of the Washington Globe, he was a keen supporter of the Democrats, and formed part of President Andrew Jackson’s ‘kitchen cabinet’. After briefly supporting the Free Soil party, he helped to launch the new Republican party in 1854. At the outbreak of the Civil War, he personally conveyed Lincoln’s offer to Robert E. Lee to command all the Union armies, which Lee rejected. After Lincoln’s re-election, Blair organised the abortive Hampton Roads Conference, where peace terms were discussed with the Confederates, but no substantial issues resolved. Two of Blair's three sons were prominent in American politics.

Blair was born at Abingdon, Virginia. He moved to Kentucky, graduated from Transylvania University in 1811, took to journalism, and was a contributor to Amos Kendall's paper, the Argus, at Frankfort. In 1830, having become an ardent follower of Andrew Jackson, he was made editor of the Washington Globe, the recognized organ of the Jackson party. In this capacity, and as a member of Jackson's "Kitchen Cabinet", he long exerted a powerful influence; the Globe was the administration organ until 1841, and the chief Democratic organ until 1845; Blair ceased to be its editor in 1849. [1] During his time in Washington serving Jackson, Blair acquired in 1836 what later became known as the Blair House. 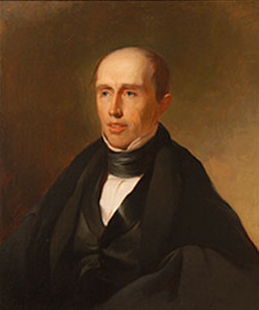 Blair in May, 1845 as painted by Thomas Sully

Even though he held slaves, Blair became convinced after the Mexican War that slavery should not be extended beyond where it was currently allowed.[2] In 1848, he actively supported Martin Van Buren, the Free Soil candidate, for the presidency, and in 1852 he supported Franklin Pierce, but soon afterwards helped to organize the new Republican Party, and presided at its preliminary convention at Pittsburgh, Pennsylvania in February 1856. He was influential in securing the nomination of John C. Frémont at the June 1856 convention. At the 1860 convention he initially supported the nomination of Edward Bates as president.[1][3] When it was clear that Bates would not be nominated, Blair supported the nomination of Abraham Lincoln.

Francis Blair was father of Montgomery Blair, a member of President Lincoln's cabinet. The elder Blair took it upon himself to advise Lincoln. On April 17, 1861, just three days after the surrender of Fort Sumter, Lincoln asked Francis Blair to convey his offer to Colonel Robert E. Lee to command the Union Army. The next day, Lee visited Blair across Lafayette Square from the White House. Lee blunted Blair’s offer of the Union command by saying: “Mr. Blair, I look upon secession as anarchy. If I owned the four millions of slaves at the South, I would sacrifice them all to the Union; but how can I draw my sword upon Virginia, my native State?”[4]

By 1862, Blair had told his slaves that they could "go when they wished." He said that "all but one declined the privilege," choosing to stay on as servants.[5]

After Lincoln's re-election in 1864 Blair thought that his former close personal relations with the Confederate leaders might aid in bringing about a cessation of hostilities, and with Lincoln's consent went unofficially to Richmond and induced President Jefferson Davis to appoint commissioners to confer with representatives of the United States (although this may have been a result of internal pressure). This resulted in the futile "Hampton Roads Conference" of February 3, 1865.

After the Civil War Blair became a detractor of President Andrew Johnson's reconstruction policy, and eventually rejoined the Democratic Party. He died at Silver Spring, Maryland, at the age of 85, .[1]

In 1840, Blair, and perhaps his daughter Elizabeth, encountered a "mica-flecked" spring in the vicinity of Seventh Street Pike (now Acorn Park on Blair Mill Rd. off the renamed Georgia Avenue). He liked the location so much that he bought the surrounding land and created a summer home for his family which he called "Silver Spring." The city of Silver Spring, Maryland took its name from Blair's estate.[6]

At the top of the state of Georgia lies Union County, named after the Union Party who strongly supported President Andrew Jackson for his policy of Indian removal. On December 26, 1835, the Georgia General Assembly designated Union’s county seat in an act that read, "lot No. 273 of the ninth district and first section of, originally Cherokee, now Union county, and at a place now known by the name of Blairsville" (Ga. Laws 1835, p. 113). It is traditionally assumed that the town (Blairsville, Georgia) was named after Francis P. Blair who was not only a prominent and influential man of his time but was a strong supporter of the Union Party in which the county itself had been named after. Adjacent towns and counties in the area have similar ties to the Union Party that help to support this connection.

Francis Preston Blair is a great-great-grandfather of actor Montgomery Clift (1920–1966).

Blair is played by Hal Holbrook in Steven Spielberg's Lincoln (2012).

Blair is played by Malachy McCourt in Ronald Maxwell's Gods and Generals (film) (2003).