From Infogalactic: the planetary knowledge core
Jump to: navigation, search
For his father, the journalist and politician, see Francis Preston Blair.

Francis Preston Blair, Jr. (February 19, 1821 – July 8, 1875) was an American politician and soldier. He represented Missouri in both the House of Representatives and the Senate, and was active in preventing that neutral state from being absorbed into the Confederacy in the Civil War. After recruiting a Unionist home guard, Blair helped the new local military commander Nathaniel Lyon to move weapons from the St. Louis arsenal to safety in Illinois (Camp Jackson Affair), breaking an informal truce with the Confederates. This set the scene for continuing guerrilla activity by outraged pro-slavery elements.

In 1862, Blair joined the Missouri volunteers, being promoted major general, commanding a division at Vicksburg, and ending the war as a corps commander under Sherman. In 1868, he was Horatio Seymour’s vice-presidential candidate, but his dramatic speeches about the dangers of black emancipation were believed by some to have cost the Democrats the election. He suffered a paralysing stroke in 1872, but continued to be active in politics till his death.

Blair was born in Lexington, Kentucky. He was the son of Eliza Violet (Gist) and journalist and politician Francis Preston Blair, and the brother of Montgomery Blair. He was also the cousin of B. Gratz Brown. He attended schools in Washington, D.C., and the University of North Carolina, graduated from Princeton University in 1841, and studied law at Transylvania University. After his admission to the bar in Lexington, he went on to practice in St. Louis in 1842.

Blair participated in the Mexican-American War and was appointed attorney general for the New Mexico Territory after it was secured by General Stephen W. Kearny. A personal and political friend of Thomas Hart Benton, he became known for his views opposing slavery. Blair served in the Missouri House of Representatives from 1852 to 1856. He was an outspoken Free-Soiler and was elected as a Republican to the United States House of Representatives in 1856. He was defeated in 1858, but successfully contested the election and was finally seated on June 8, 1860, resigning on June 25, 1860. He was unsuccessful as a candidate in the special election to fill the vacancy caused by his own resignation, but was elected in 1860 to the 37th Congress, serving until his resignation in July 1862 to become a Colonel in the Union Army. He was subsequently elected in 1862 to the 38th Congress, but had to relinquish his seat on June 10, 1864, after Samuel Knox successfully contested his election. In Congress, he served as chairman of the important Military Affairs Committee.

In the days following Lincoln's election, when it became evident that several southern states were advocating secession, Blair was among the leaders of a new political movement in Missouri, the Unconditional Union Party, which advocated the use of force, if necessary, to prevent Missouri from following suit. 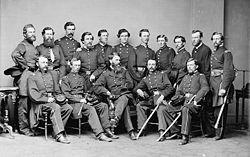 General Blair and his staff

Immediately after South Carolina's secession in December 1860, Blair, believing that the southern leaders were planning to carry neutral Missouri into the movement, began active efforts to prevent it. He personally organized and equipped a force of several thousand Unionist "Home Guards", drawn from the "Wide Awakes" - the Republican marching clubs of the 1860 campaign.

When tensions rose, Blair and Captain (later brigadier general) Nathaniel Lyon suddenly transferred the arms in the U.S. Arsenal at St Louis to Alton, Illinois. On 10 May 1861, Lyon, with the Home Guards and a U.S. regular Army company, captured several hundred state militia which had been positioned to seize the Arsenal. The Camp Jackson Affair gave the Federal cause a decisive initial advantage in Missouri but also inflamed secessionist sentiments in the state.

Open warfare between Union forces and the followers of pro-Southern Missouri governor Claiborne Jackson was imminent. To avoid this, General William S. Harney, the Army commander in Missouri, agreed to the Price-Harney Truce with Missouri State Guard commander Sterling Price on 21 May.

Blair objected, and contacted Republican leaders in Washington. Within a few weeks, Harney was replaced by Lyon as temporary commander. Lyon drove Jackson and Price to the southwestern corner of Missouri before he was killed at the Battle of Wilson's Creek, while Blair helped organize a new all-Unionist state government, and John C. Frémont took over as Army commander.

Frémont was himself a prominent Republican with Missouri connections. Blair soon came to regard Frémont as a political rival, and they clashed over many aspects of Frémont's operations in Missouri. Frémont as the regional Army commander was responsible for spending a lot of money in a great hurry for supplies and equipment. Blair expected most of this money to go his allies in the St. Louis business community, but Frémont and his staff had their own ideas. Blair's bitter complaints, added to the waste and corruption, helped discredit Frémont, who was replaced on 2 November.

Blair resigned from the House of Representatives in July 1862, having been appointed a colonel of Missouri volunteers. He was promoted brigadier general of volunteers in August 1862 and then to major general in November.

Blair subsequently commanded a division in the Vicksburg campaign and in the fighting about Chattanooga, and was one of William T. Sherman's corps commanders in the final campaigns in Georgia and the Carolinas. His XVII Corps was engaged protecting the rear areas of Sherman's army until later in the Atlanta Campaign. Before it left on the March to the Sea, XVII Corps absorbed part of the detachment of XVI Corps that had served with Sherman.

At the close of the war, Blair, having spent much of his private fortune in support of the Union, was financially ruined.

In 1866 like his father and brother he opposed the Congressional Reconstruction policy, and on that issue left the Republican Party. He was the unsuccessful Democratic candidate for vice president in 1868, running with Horatio Seymour. Blair contributed to the Democratic defeat by going on a speaking tour in which he framed the contest with Ulysses S. Grant and the pro-Reconstruction Republicans in stark racial terms, warning of the rule of "a semi-barbarous race of blacks who are worshipers of fetishes and poligamists" and wanted to "subject the white women to their unbridled lust."[1] At least one Democratic Congressman saw Blair as the cause of Seymour's defeat, calling his behavior "stupid and indefensible."[1]

Blair had an odd minor notoriety, when on July 29, 1870, he was an accidental witness to an incident in a famous homicide case. Staying at the then famous Fifth Avenue Hotel, facing West 23rd Street off Fifth Avenue, Blair woke up to cries of help from across the street. He watched from his hotel window as two men ran out of a brownstone mansion across the street. They were two of the sons of Benjamin Nathan, the Vice President of the New York Stock Exchange, who had been bludgeoned to death the previous night. There was a series of hearings, and even suspicion towards several people, but the mystery was never solved.

In 1871 Blair was chosen by the Missouri Legislature as a United States Senator. On November 16, 1872, he was stricken down by paralysis, from which he never recovered. Largely owing to his stricken condition, he was defeated for reelection to the Senate in January 1873. Blair learned to write painfully with his left hand and continued his political efforts.

Blair's consuming interest in politics kept him active and a candidate for office until his death from a fall in 1875. He is interred in Bellefontaine Cemetery.

In 1899, the state of Missouri donated a marble statue of Blair to the U.S. Capitol's National Statuary Hall Collection.

A statue to Senator Blair was erected at the entrance to Forest Park in Saint Louis at the intersection of Kingshighway and Lindell Blvds. in 1885.