From Infogalactic: the planetary knowledge core
Jump to: navigation, search
This article is about the English theologian. For the microbiologist, see Francis Peyton Rous. 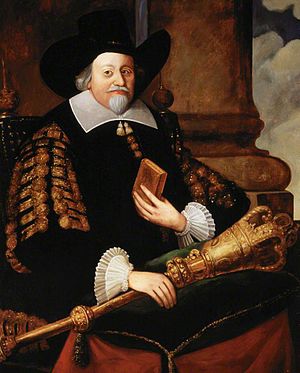 Francis Rous or Rouse (1579 – January 1659) was an English politician and a prominent Puritan. He wrote several theological and devotional works and was also Provost of Eton.

He was born at Dittisham in Devon in 1579, the fourth son of Sir Anthony Rous (c.1555-1620), MP, of Halton, St. Dominick, Cornwall, by his first wife, Elizabeth Southcote, daughter of Thomas Southcote.[1] John Pym was his stepbrother, his mother being Sir Anthony's second wife, Philipa Colles, daughter of Michael Colles and Mary Graunt.[2][3]

He was educated at Broadgates Hall, Oxford and the University of Leiden, graduating at the former in January 1596–97, and at the latter thirteen months afterwards. In 1601 he entered the Middle Temple, but soon afterwards retired to Landrake. For some years he lived in seclusion in Cornwall and occupied himself with theological studies.[4]

In the Long Parliament Rous opened the debate on the legality of William Laud's new canons on 9 December 1640, and presented the articles of impeachment against John Cosin on 15 March 1641. When the Westminster Assembly was formed on 12 June 1643, he was nominated one of its lay assessors, and on 23 September 1643 he took the Solemn League and Covenant. He was chairman of the committee for ordination of ministers constituted on 2 October 1643 following, and a member of the committee of appeals appointed for the visitation of the University of Oxford on 1 May 1647. On 16 July 1648 he was sworn of the Derby House Committee.[4]

He was Speaker of the House during Barebone's Parliament of The Protectorate. In 1657 he was offered a seat in Cromwell's House of Lords, but did not take it.[4][6]

Other service and later life

He obtained many offices under the Commonwealth, among them that of provost of Eton College. At first a Presbyterian, he afterwards joined the Independents, in 1649. In early 1652, he served on the committee for propagation of the gospel, which framed an abortive scheme for a state church on a congregational plan. When Barebone's Parliament dissolved itself, Rous was sworn in on Oliver Cromwell's council of state. In 1654, he was on the committee for approbation of public preachers; he was also one of the committee appointed on 9 April 1656 to discuss the question of the kingship with Cromwell.

While at Oxford he contributed a sonnet to Charles Fitz-Geffrey's Sir Francis Drake his Honourable Life's Commendation(1596). In imitation of Edmund Spenser, he wrote a poem in two books, entitled Thule, or Virtue's History (1598).[4][7]

The theological works that first made him known were:

He was a versifier of the Psalms.[9] His translation, with some modifications, was adopted by the Church and Parliament of Scotland for use in public worship, a position which it held almost exclusively until the middle of the 19th century.

The subjective cast of his piety is reflected in his Mystical Marriage . . . betweene a Soule and her Saviour (1635).[6] There is some doubt about the attribution to Rous of co-authorship in The Ancient Bounds, a work of 1645 advocating religious tolerance; some say he was an author, and that this has implications for his place on the spectrum of independents.[8][10] A scholarly case has been made for the authorship of Joshua Sprigg.[11]

A debate was initiated by Rous in a brief pamphlet in April 1649 in which he argued that allegiance could be given to the Commonwealth even though it were acknowledged to be an illegal power.[12] Rous focused on a key biblical text – holding that St Paul's injunction in Romans 13: 1–2 to obey "the powers that be" because they are ordained of God had to be taken literally. His essential argument, which in effect mirrored the doctrine of the Divine Right of Kings, was that the mere fact that a government had the capacity to rule and was capable of commanding the subject's obedience was sufficient evidence of God's will and providence in establishing the government.

Rous's pamphlet was immediately attacked by those who argued that he was ignoring the Pauline distinction between authority and power: the anonymous author of The Grand Case of Conscience Stated (no place nor date of publication), for example, argued that "when any shall usurp Authority, by whatsoever title or force he procures it, such may be obeyed in reference to their power, while they command lawful things, but not in reference to Authority" (p. 3), yet "they cannot illegally get themselves the legal power, nor can they exclude others from their Authority, although by force they may keep them the exercise of it" (p. 8).

In his pamphlet, Rous deployed a secondary argument that did not rest on scripture but on a Hobbesian social contract. What Rous argued was that "when a person or persons have gotten Supreme Power, and by the same excluded all other from authority, either that authority which is thus taken by power must be obeyed, or else all authority and government must fall to the ground; and so confusion (which is worse than titular tyranny) be admitted into a Commonwealth" (Rous, Lawfulnes, pp. 7–8).

By his wife Philipa (born 1575, died 20 December 1657, and buried in Acton church), Rous had a son Francis Rous (the younger) who was known as a writer. He was born at Saltash in 1615, and educated at Eton and Oxford, where he matriculated on 17 October 1634, and was elected to a postmastership at Merton College the same year. He afterwards migrated to Gloucester Hall. About 1640 he settled in London, where he practised medicine until his death in or about 1643. He contributed to Flos Britannicus veris novissimi filiola Carolo et Maryse nata xvii. Martii (1636) and compiled Archaeologiae Atticae Libri Tres (1637).[4][13]