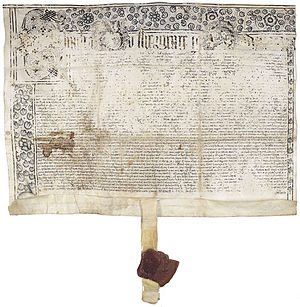 Sir Francis Wyatt (1588–1644) was the first English royal governor of Virginia. He sailed for America on August 1, 1621 on board the George. He became governor shortly after his arrival in October, taking with him the first written constitution for an English colony. Also sailing with him on this voyage was his second cousin Henry Fleete Sr., who helped found colonies in both Virginia and Maryland. In 1622 he rallied the defense of Jamestown which was attacked by Native Americans, during which the lives of some 400 settlers were lost and he then oversaw the contraction of the colony from scattered outposts into a defensive core.[1]

Wyatt was governor of Virginia from November 1621. Virginia became a royal colony in 1624, but Sir Francis, at the request of the crown, remained on as governor until September 18, 1625, when Sir George Yeardley, whom he had succeeded, resumed the office. In 1624, Wyatt resided in Jamestown with his wife, his brother Haute, and seventeen servants. In 1625, he received a black servant girl after a court settlement from her previous employer.[3] After leaving office, he left Virginia for the Ireland and England to settle his father's estate. He was appointed governor again in 1639, sailing from England to take up his post. He served from November 1639 until February 1641 and was then succeeded by Sir William Berkeley. He arranged the purchase of the home of the previous governor to use as the first designated "state house" of the colony, the government previously having met in the church.[4]

Wyatt returned to England after his second term as governor and died in Boxley. He was buried there on August 24, 1644.

Sir Francis Wyatt organized the General Assembly which had been called in 1619. This was the first legislative body in America. Sir Francis caused its privileges to be embodied in a written constitution, the first of its kind in the New World.

Francis Wyatt's grandfather was Sir Thomas Wyatt the younger, who had led the Kent faction of Wyatt's rebellion to the Spanish marriage of Queen Mary in support of Lady Elizabeth. His great-grandfather Thomas Wyatt the elder, the poet, was briefly imprisoned in the Tower of London for an alleged relationship with Anne Boleyn.

Sir Francis's wife Margaret was the daughter of Sir Samuel Sandys and the niece of George Sandys, the treasurer of Jamestown. Francis and Margaret's children included Henry, whose daughter Frances briefly held Boxley; Francis, who was at King's College, Cambridge, in 1639; Edwin, an MP who successfully sued his niece to regain Boxley, but whose son died without issue; and Elizabeth, whose grandson Robert Marsham, 1st Baron Romney (1685–1724), eventually inherited Boxley. Boxley remained with the barons and earls of Romney for more than two hundred years.[5] Sir Francis left no direct descendants in what would later become the United States of America.

His younger brother, the Reverend Hawte Wyatt (1594–1638), who was the rector of Maidstone, Kent, traveled to Virginia with Francis in 1621 and returned with him to England in 1624, after their father died. Rev. Wyatt's many descendants in America include the late Duchess of Windsor, wife of Edward VIII, later the Duke of Windsor.[6]