Francis de Sales, CO OM OFM Cap. (French: François de Sales; 21 August 1567 – 28 December 1622) was a Bishop of Geneva and is honored as a saint in the Roman Catholic Church. He became noted for his deep faith and his gentle approach to the religious divisions in his land resulting from the Protestant Reformation. He is known also for his writings on the topic of spiritual direction and spiritual formation, particularly the Introduction to the Devout Life and the Treatise on the Love of God.

Francis de Sales was born on 21 August 1567 in the Château de Sales into the noble Sales family of the Duchy of Savoy, in what is today Thorens-Glières, Haute-Savoie, France. His father was François de Sales, Lord of Boisy, Sales, and Novel. His mother was Françoise de Sionnaz, the only child of prominent magistrate, Melchior de Sionnaz, and a noblewoman. He was baptized Francis Bonaventura, after two great Franciscan saints. His father wanted him, the first of his six sons, to attend the best schools in preparation for a career as a magistrate. He therefore enjoyed a privileged education in the nearby town of La Roche-sur-Foron and at the age of eight, at the Capuchin college in Annecy.[1]

In 1583, De Sales went to the Collège de Clermont (later renamed Lycée Louis-le-Grand) in Paris, then a Jesuit institution, to study rhetoric and humanities. As a nobleman, he was accompanied by his own servant and by a priest tutor, Abbe Deage. To please his father, he took lessons in the gentlemanly pursuits of riding, dancing, and fencing.[2] De Sales is described as intelligent and handsome, tall and well built with blue-grey eyes, somewhat reserved and quiet, and a welcome guest in the homes of the nobility among whom his father had connections.[3]

In 1584 Francis de Sales attended a theological discussion about predestination, convincing him of his damnation to hell. A personal crisis of despair resulted. This conviction lasted through December 1586. His great despair made him physically ill and even bedridden for a time. The following month, January 1587, with great difficulty, he visited the old parish of Saint-Étienne-des-Grès, Paris, where he prayed the "Memorare" before a famed statue of Our Lady of Good Deliverance, a Black Madonna. He consecrated himself to the Blessed Virgin Mary, and decided to dedicate his life to God with a vow of chastity. He then became a tertiary of the Minim Order.[4]

Sales ultimately concluded that God had good in store for him, because "God is love", as Scripture attests. This faithful devotion to the God of love not only expelled his doubts but also influenced the rest of his life and his teachings. His way of teaching Catholic spirituality is often referred to as the Way of Divine Love, or the Devout Life, taken from a book he wrote of a similar name: Introduction to the Devout Life.

In 1588 Sales completed his studies at Collège de Clermont and enrolled at University of Padua in Italy, where he studied both law and theology. He took Antonio Possevino, a priest in Society of Jesus, as his spiritual director.[1] There he made up his mind about becoming a priest. In one incident, he rode a horse, and his sword fell to the ground and crossed another sword, making the sign of the Christian cross.

In 1592, Sales received his doctorate in law and theology. He made a pilgrimage to Loreto, Italy, famous for its Basilica della Santa Casa (Shrine of the Holy House) and then returned home to Savoy. The Senate of Chambéry admitted him as a lawyer. Meanwhile, his father secured various positions for Francis, including an appointment as senator. His father also chose a wealthy noble heiress as his bride. But Francis refused to marry, preferring to stay focused on his chosen path. His father initially refused to accept that Francis had chosen the priesthood rather than fulfill his expectations with a political-military career.[5] Claude de Granier, then Bishop of Geneva, intervened and after signing over to his younger brother his rights of family succession, he was ordained in 1593. Immediately he received a promised appointment as provost of the cathedral chapter of Geneva.[5]

In his capacity as provost, Francis de Sales, engaged in enthusiastic campaigns of evangelism in an area that had become almost completely Calvinist.[5] According to J. Ehni, despite de Sales' zeal, courage and patience he met with absolute failure at Thonon, the capital of the Chablais province, where the residents had made an agreement to refuse to hear the eloquent preacher.[6] At first Francis lived in a fortress garrisoned by the Duke of Savoy's soldiers. Several times he escaped death at the hands of assassins.[7] He traveled to Rome and Paris, where he forged alliances with Pope Clement VIII and Henry IV of France.

In 1599 he was appointed coadjutor bishop of Geneva.[8] In 1601, he was sent on a diplomatic mission to Henry IV, where he was invited to give Lenten sermons at the Chapel Royal. The morals at court reflected those of the king, which were notoriously bad, yet Henry became personally attached to Francis, and is said to have observed, "A rare bird, this Monsieur de Geneve, he is devout and also learned; and not only devout and learned but at the same time a gentleman. A very rare combination."[3]

While in Paris, he also met Cardinal Berulle and was, for a time, Madame Acarie's confessor. They consulted with him on matters such as the introduction of St. Teresa's Carmelites into France and plans for the reforming of monasteries and convents. He was consulted on matters of conscience by persons at court.[3] 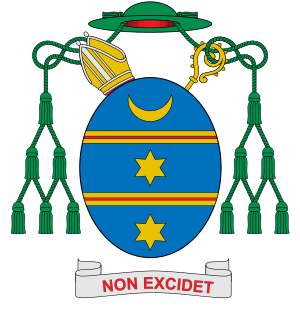 In 1602, Bishop Granier died, and Sales was consecrated Bishop of Geneva, but resided in Annecy (now part of modern-day France) because Geneva remained under Calvinist control and therefore closed to him. His diocese became famous throughout Europe for its efficient organization, zealous clergy and well-instructed laity, monumental achievements in those days.[9]

He worked closely with the Order of Friars Minor Capuchin, very active in preaching the Catholic faith in his diocese. They appreciated his cooperation so much that in 1617 they made him an official associate of the Order, the highest honor possible to a person outside it. It is said that at Evian, on the south shore of Lake Geneva, St. Francis of Assisi appeared to him and said: "You desire martyrdom, just as I once longed for it. But, like me, you will not obtain it. You will have to become an instrument of your own martyrdom."[7] During his years as bishop, Sales acquired a reputation as a spellbinding preacher and something of an ascetic. His motto was, "He who preaches with love, preaches effectively." His goodness, patience and mildness became proverbial.[8]

These last qualities come through in Sales' books, the most famous of which was Introduction to the Devout Life, which – unusual for the time – was written specially for laypeople. In it he counseled charity over penance as a means of progressing in the spiritual life. Sales also left the mystical work, the "Treatise on the Love of God",[10] and many highly valued letters of spiritual direction, including those with Jane Frances de Chantal compiled in the Letters of Spiritual Direction.[11] He was a notably clear and gracious stylist in French, Italian and Latin.[citation needed]

His writings on the perfections of the heart of Mary as the model of love for God influenced Jean Eudes to develop the devotion to the Hearts of Jesus and Mary.[12] 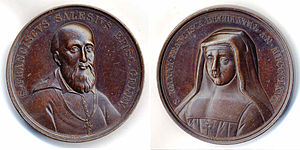 Along with St. Jane Frances de Chantal, Sales founded the women's Order of the Visitation of Holy Mary (Visitandines) in Annecy on 6 June 1610. Despite his friendship with Denis-Simon de Marquemont, the archbishop nonetheless restricted the freedoms of de Sales' new order in 1616 by ordering that its members live cloistered lives.[13]

Sales also established a small community of men, an Oratory of St. Philip Neri, at Thonon-les-Bains, with himself as the superior or Provost. This work, however, was crippled by his death, and that foundation soon died out.[14]

In December 1622 Sales was required to travel in the entourage of Charles Emmanuel I, Duke of Savoy, for the Duke's Christmas tour of his domain. Upon arrival in Lyon, he chose to stay in the gardener's hut at the Visitandine monastery in that city. While there he suffered a stroke, from which he died on 28 December 1622.[10]

Veneration after his death

St. Francis de Sales has been styled "the Gentleman Saint" because of his patience and gentleness.[7] Despite the resistance of the populace of Lyon to moving his remains from that city, Sales was buried on 24 January 1623 in the church of the Monastery of the Visitation in Annecy, which he had founded with Chantal, who was also buried there. Their remains were venerated there until the French Revolution.[15] Many miracles have been reported at his shrine.

Sales' heart was kept in Lyon, in response to the popular demand of the citizens of the city to retain his remains. During the French Revolution, however, it was taken to Venice, where it is venerated today.[citation needed]

Francis de Sales was beatified in 1661 by Pope Alexander VII, who then canonized him four years later. He was declared a Doctor of the Church by Pope Pius IX in 1877.[2]

The Roman Catholic Church celebrates St. Francis de Sales' feast on 24 January, the day of his burial in Annecy in 1624.[16] From the year 1666, when his feast day was inserted into the General Roman Calendar, until its 1969 revision, he was celebrated on 29 January, a date still observed by some Traditionalist Catholics.

In 1923, Pope Pius XI proclaimed him a patron of writers and journalists, because he made extensive use of broadsheets and books both in spiritual direction and in his efforts to convert the Calvinists of the region.[5] St. Francis developed a sign language in order to teach a deaf man about God. Because of this, he is the patron saint of the deaf.[10]

Having been founded as the first non-cloistered group of sisters after attempts to do so with the Visitation Sisters founded by de Sales and de Chantal proved unsuccessful, the Sisters of St. Joseph (founded in Le Puys, France, in 1650) take St. Francis de Sales as one of their patrons.

In the 19th century, his vision for religious communities was revived. Several religious institutes were founded during that period for men and women desiring to live out the spiritual path which de Sales had developed.

Influence on other saints

Vincent de Paul met Francis de Sales in Paris in 1618 or 1619. Francis de Sales' spirituality and writings, especially An Introduction to the Devout Life, and Treatise on the Love of God, were to have a profound influence on Vincent.[8]