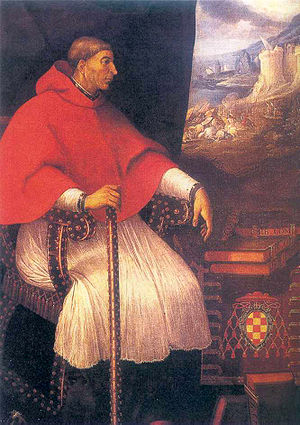 Francisco Jiménez de Cisneros, O.F.M. (1436 – November 8, 1517), known as Ximenes de Cisneros in his own lifetime, and commonly referred to today as simply Cisneros, was a Spanish cardinal, religious, and statesman.[1] Starting from humble beginnings he rose to the heights of power becoming a religious reformer, twice regent of Spain, Cardinal, Grand Inquisitor, promoter of the Crusades in North Africa, and founder of the Complutense University, today the Complutense University of Madrid. Among his intellectual accomplishments, he is best known for funding the Complutensian Polyglot Bible, the first printed polyglot version of the entire Bible. He also edited and published the first printed editions of the missal (in 1500) and the breviary (in 1502) of the Mozarabic Rite, and established a chapel with a college of thirteen priests to celebrate the Mozarabic Liturgy of the Hours and Eucharist each day in the Toledo Cathedral.

Cardinal Cisneros' life coincided with, and greatly influenced, a dynamic period in the history of the Spanish language during the reign of Ferdinand II of Aragon and Isabella I of Castile. During this time Spain underwent many significant changes, leading it into its prominent role in the Spanish Golden Age (1500–1700). Modern historian John Elliott said as far as any particular policies that can be attributed to Spain's rise, they were those of King Ferdinand and Cardinal Cisneros.[2]

Coat of arms of Cardinal Cisneros.

He was born as Gonzalo Jiménez de Cisneros to a poor family in Torrelaguna in Castile in 1436 and studied at Alcalá de Henares and Salamanca. In 1459, he traveled to Rome to work as a consistorial advocate where he attracted the notice of Pope Pius II. He returned to Spain in 1465 carrying an "executive" letter from the Pope giving him possession of the first vacant benefice. That turned out to be Uceda. However, Alfonso Carrillo de Acuña, the Archbishop of Toledo and Primate of Spain, refused to accept the letter, wishing instead to bestow the benefice upon one of his own followers. When Cisneros insisted, he was thrown in prison. For six years, Cisneros held out for his claim, free to leave at any time if he would give it up, but at length in 1480 Carillo relented at Cisneros' strength of conviction and gave him a benefice. Cisneros traded it almost at once for a chaplaincy at Sigüenza, under Cardinal Pedro González de Mendoza, the bishop of Sigüenza, who shortly after appointed him vicar general of his diocese.

At Siguenza, Cisneros won praise for his work and he seemed to be on the sure road to success among the secular clergy, when in 1484 at the late age of forty-eight he abruptly decided to become a Franciscan friar. Giving up all his worldly belongings, and changing his baptismal name, Gonzalo, for that of Francisco, he entered the Franciscan friary of San Juan de los Reyes, recently founded by Ferdinand II of Aragon and Isabella I of Castile at Toledo. Not content with the normal lack of comforts for a friar, he voluntarily slept on the bare ground, wore a cilice, doubled his fasts, and generally denied himself with enthusiasm; indeed throughout his whole life, even when at the height of power, his private life was rigorously ascetic.

He retired to the isolated friary of Our Lady of Castañar and built a rough hut in the neighboring woods, in which he lived at times as an anchorite, and later became guardian of a friary at Salzeda. Meanwhile, Mendoza (now Archbishop of Toledo) had not forgotten him, and in 1492 recommended him to Isabella as her confessor. Jiménez accepted the position on condition that he might still live in his community and follow the religious life, only appearing at court when sent for. The post was politically important, for Isabella took counsel from her confessor not only in religious affairs but also matters of state. Isabella's Alhambra Decree, which expelled the Jews from Spain, followed almost immediately upon Cisneros' appointment as her confessor.[3] Cisneros' severe sanctity soon won him considerable influence over Isabella, and in 1494 he was appointed Minister Provincial of the order for Spain. Cardinal Mendoza died in 1495, and Isabella had secretly procured a papal bull nominating Cisneros to Mendoza's Archdiocese of Toledo, the richest and most powerful in Spain. With this office was also given the office of chancellor of Castile. Isabella tried to surprise him by presenting the bull as a gift in person, but Cisneros did not react as she had expected. Instead, he fled her presence, and ran away, only to be overcome by Isabella's guards and forced to accept the position against his will. Despite this, Cisneros personally still maintained a simple life; although a message from Rome required him to live in a style befitting his rank, the outward pomp only concealed his private asceticism.

From his new position Cisneros set about reforming the Franciscan order in Spain. The ordained friars had to become celibate, giving up the practice of having "wives" (concubines, Spanish es:barraganas). They had to reside in the parish where they were supposed to work, attend confession, and preach every Sunday. There was intense opposition. By 1498 the reforms were expanded to include not only Franciscans but other religious orders as well. The resistance was so fierce that four hundred monks and friars left for Africa with their "wives" and converted to Islam. The Minister General of the order himself came from Rome to attempt to temper the archbishop's strict reforms, but Cisneros, backed by the influence of a strong Queen, managed to impose them. 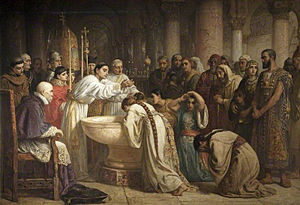 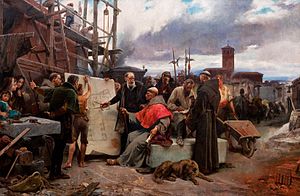 Cisneros (sitting) visits the construction of the Hospital of the Charity. Sanctuary of the Charity of Illescas (Toledo) by Alejandro Ferrant (1844–1917)

In 1499 Cisneros accompanied the court of the Spanish Inquisition to Granada, and there interfered with the Archbishop of Talavera's efforts to peacefully convert its Muslim inhabitants to Christianity. Talavera favored slow conversion by explaining to the Moors, in their language, the truths of the Catholic religion, but Cisneros said that this was "giving pearls to pigs," and proceeded with forced mass conversion. He ordered the public burning of all Arabic manuscripts that could be found in Granada—5,000 is the lowest figure the contemporary sources give—except those dealing with medicine.[4] The indignation of the unconverted Mudéjares (i.e., Iberian Muslims living in Christian territories) over this gross violation of the Alhambra treaty swelled into the open revolt known as the First Rebellion of the Alpujarras. The revolt was violently suppressed and they were given a choice—contrary to the terms of Granada's surrender—of baptism or exile. The majority accepted baptism and by 1500 Cisneros reported that "there is now no one in the city who is not a Christian, and all the mosques are churches".[5] However, he had created a problem that would only end with the expulsion from Spain of Moriscos in 1609. (Morisco became the common term used for descendents of Iberian Moors in Spanish and Portuguese territory, regardless of their adherence to Christianity.)

On November 26, 1504 Isabella died. Ferdinand claimed regency against his son-in-law Philip I of Castile, and Cisneros helped mediate the dispute in the Agreement of Salamanca which left Philip as king of Castile. When Philip died in 1506, Ferdinand was in Naples and Cisneros set up a regent government in his absence, and stopped a plot by a group of high nobles to take over the throne. In return for his loyalty, Ferdinand made Cisneros Grand Inquisitor for Castile and León in 1507 and prevailed on the Pope to give him a Cardinal's hat.

The next great event in the cardinal's life was the attack against the Moorish city of Oran in North Africa, in which his religious zeal coincided with Ferdinand's prospect for political and material gain. A preliminary expedition, equipped at Cisneros' expense, captured the port of Mers El Kébir in 1505; and in 1509 a strong force accompanied by the cardinal in person set sail for Africa, and in one day the wealthy city was taken by storm. Cisneros returned to Spain and attempted to recover from Ferdinand the expenses of the expedition, but Ferdinand was content with taking Oran and because of his greater interest in Italy he would not support Cisneros' plans for a larger North African crusade and conquest.

On January 28, 1516 Ferdinand died, leaving Cisneros as regent of Castile for Charles (afterward Charles V, Holy Roman Emperor), then a youth of sixteen in the Netherlands. Though Cisneros at once took firm hold of the reins of government, and ruled in a determined and even autocratic manner, the turbulent Castilian nobility and the jealous intriguing Flemish councilors for Charles combined to render Cisneros' position peculiarly difficult. Cisneros acceded to Charles's desire to be proclaimed king; he secured the person of Charles's younger brother Ferdinand I, Holy Roman Emperor; he fixed the seat of the courts at Madrid; and he established a standing army by drilling the citizens of the towns. During his regency, he dealt with the Spanish conquest of Navarre. He is remembered for ordering to demolish most of the fortresses of Navarre (e.g. the Castle of Xavier, home to Francis Xavier's family) aimed at dampening any spirits of resistance and thwarting future rebellions against Spanish occupation.

In September 1517, Charles landed in the province of Asturias, and Cisneros hastened to meet him. On the way, however, he fell ill. While thus enfeebled, he received a letter from Charles thanking him for his services, and giving him leave to retire to his diocese. A few hours after this dismissal (which some say the cardinal did not have time to learn about) Cardinal Cisneros died at Roa, on 8 November 1517.

Cardinal Cisneros was a bold and determined statesman. Described as stern and inflexible, with a confidence that became at times overbearing, he carried through what he had decided to be right, with little regard for the convenience of others or for himself. He was seen as incorruptible, and founded and maintained numerous benevolent institutions in his diocese. His whole life was devoted either to the state or to religion; and his only recreation was in theological or scholastic discussion.

The university at Alcalá de Henares was founded in 1500 and opened in 1508. The university, raised at the sole expense of and fostered by Cardinal Cisnenos, attained a great reputation. At one time 7,000 students met within its walls. In 1836, the university, with falling enrollments and in some disarray, was moved to Madrid, renamed the Universidad Complutense de Madrid ("Complutense" means "from Alcalá", whose Latin name is Compluto), and the buildings in Alcalá de Henares were left vacant until the creation of the modern University of Alcalá de Henares in 1977.

Cisneros published religious treatises by himself and others. He also revived the Mozarabic liturgy, and endowed a chapel in Toledo where it was to be used.

He is well known for his sponsorship of the Complutensian Polyglot, the first printed polyglot translation of the Bible, in which three different versions of the Old Testament were put in parallel columns--Greek, Latin, and Hebrew--with the Aramaic text of Targum Onkelos and its own Latin translation added at the bottom, so that readers for the first time could check all the translations simultaneously. The New Testament consisted of parallel columns of Greek and the Latin Vulgate. The text occupies five volumes, and a sixth contains a Hebrew lexicon, etc. The work commenced in 1502. The New Testament was finished in January 1514, and the whole in April 1517. The book was dedicated to Pope Leo X but the cardinal died months after it was completed and did not live to see it published.

Except where otherwise noted with inline footnotes, this article is entirely sourced to the 1911 Encyclopædia Britannica.