From Infogalactic: the planetary knowledge core
Jump to: navigation, search
This article is about the conservator of Popol Vuh. For other uses, see Ximénez. 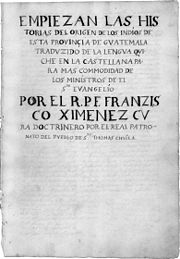 "[Here] begin the histories of the origin of the Indians of this province of Guatemala. Translated from the Quiché language into Castillian for the convenience of the ministers of the holy gospel by the R[everend] P[adre] F[riar] Francísco Ximénez, doctrinal priest of the royal council of Santo Tomás Chilá."

Francísco Ximénez (November 28, 1666 – c.1729) was a Dominican priest who is known for his conservation of an indigenous Maya narrative known today as Popol Vuh. There is, as Woodruff has noted, little biographical data about Ximénez.[1] Aside from the year, his birth and baptismal records do not agree on the actual date of his birth, and the year of his death is less certain, either in late 1729 or early 1730. He enrolled in seminary in Spain and arrived in the New World in 1688, where he completed his novitiate.

Father Ximénez's sacerdotal service began in 1691 in San Juan Sacatepéquez and San Pedro de las Huertas where he learned Cakchiquel. In December 1693, Ximénez began serving as the Doctrinero of San Pedro de las Huertas. He continued in this office for at least ten years during which time he was transferred to Santo Tomás Chichicastenango (also known as Chuilá) from 1701-1703. Father Ximénez was also the curate of Rabinal from 1704 through 1714 and further served as the Vicario and Predicador-General of the same district as early as 1705.